Taking inspiration from role-playing games and ’80s movies, collaborators Jess Johnson and Simon Ward have remade the archetypal hero’s journey into something unsettling. In partnership with Heide, we speak to the pair about their alternate world. 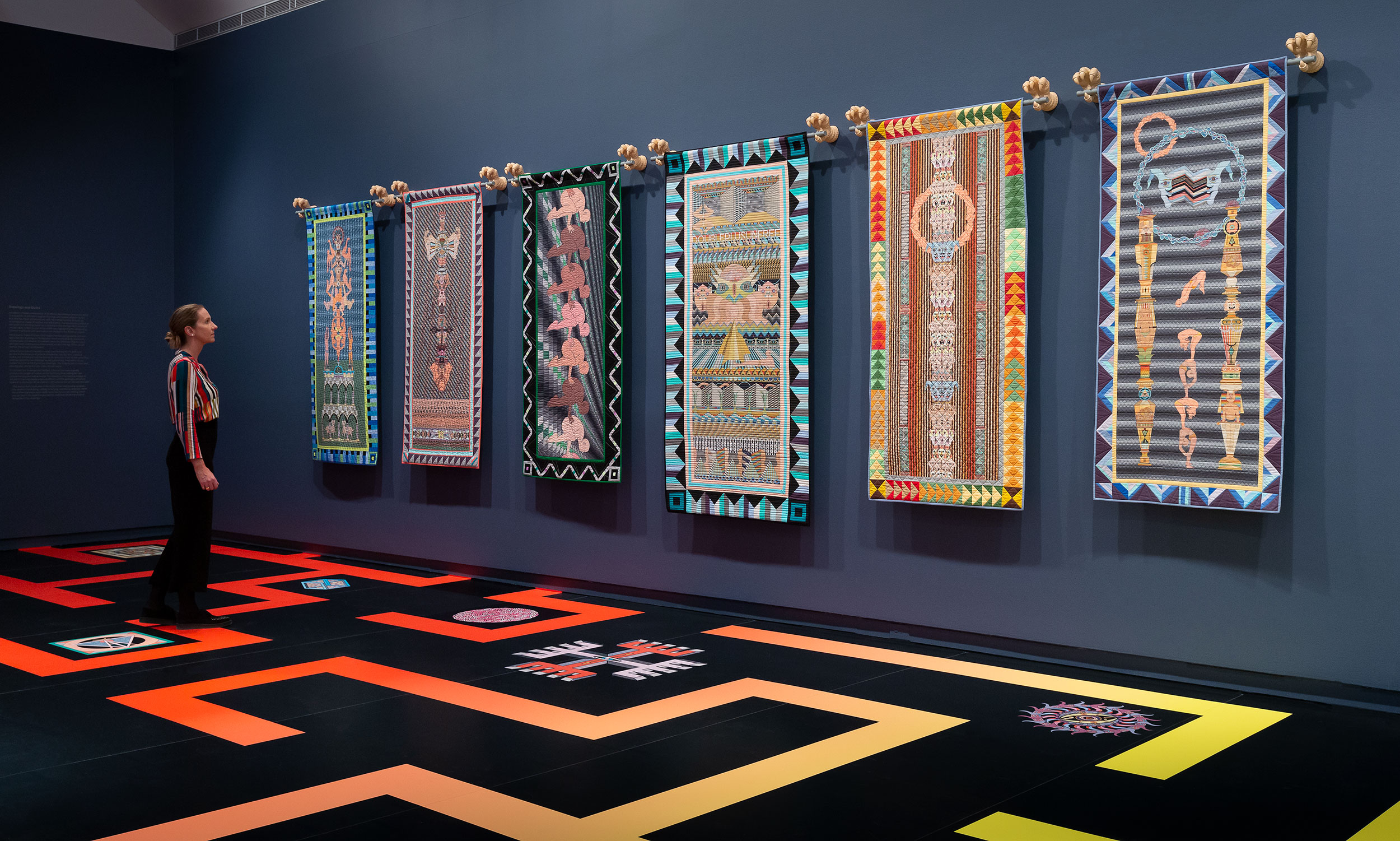 Jess Johnson and Simon Ward regularly finish each other’s sentences. The New Zealand natives are each artists in their own right – Johnson is an illustrator, Ward a video maker and animator – but since a fruitful partnership began in 2013, the pair has been attempting to articulate something approximating an entirely new universe.

Their latest shared work is their biggest. The large-scale immersive Terminus, currently showing at Heide Museum of Modern Art, spans five separate cyber narratives, directing audiences across a “map” on the gallery floor and – once a headset is fastened – into a linked VR experience. Using the gallery as a jumping off point, Terminus takes the viewer on a deeply psychedelic journey through 360-degree art that draws from role-playing computer games, choose-your-own-adventure stories and unsettling sci-fi iconography.

Drawing from discomfort
“I don’t think we shy away too much from discomfort, but a lot of films we consumed as kids dealt with some pretty esoteric, out-there, mystical themes and imagery,” says Johnson of the exhibition’s surreal nostalgia. “I remember being quite disturbed by scenes in The NeverEnding Story (1984) and Labyrinth (1986).”

That disturbance is a presence throughout Terminus. “We had quite specific conversations about referencing these formative experiences and narratives that got embedded in our brains when we were younger,” says Johnson. She points to one section of the exhibit where visitors cross an “incredible scale” threshold, which is inspired by a scene in The NeverEnding Story in which protagonist Atreyu attempts to pass between two giant sphinxes shooting lasers from their eyes.

“We really boiled down the narrative structure of those [kind of] movies,” says Ward. “After Star Wars (1977) it was always about the hero’s quest, but we tried to build our experience around our version of that. [In Terminus] there’s a psychedelic climax [similar to] 2001: A Space Odyssey (1968). Also, it loops around so it can be done in any order.”

Scaling up
The large-scale interior of Terminus was determined by its original commission in 2018 from the National Gallery of Australia in Canberra.

“They assigned us this giant, cavernous room in the lower part of the gallery,” says Ward. “We had this crazy idea for the format – to make it as big as possible – and that’s where it started. This idea of a large map that you navigate defined the size as well.”

Johnson agrees. “The National Gallery is this really austere brutalist building,” she says. “The walls were made of slate and … how high was the ceiling?”

“That’s why the [floor] map was the starting point,” says Johnson, “because we had to use the floor.”

“And then the structure came as a solution, so we could push things higher,” says Ward.

“It all leads the audience to five different realms,” says Johnson. “In each realm you can experience part of the journey in virtual reality.”

Time warp
Johnson and Ward spent more than a year developing Terminus. Johnson is based in New York and Ward travelled to the States to work with her and sound composer Andrew Clarke and developer Kenny Smith. For an intensive month the quartet shared a studio at the International Studio & Curatorial Program (ISCP) to nail down the skeleton before returning to their respective corners of the world to flesh it out.

The map in the gallery echoes the pixelated linear contours of games such as Minecraft or game-ified movies such as Tron. Dominating the floor it provides a useful through line for Johnson’s discombobulating illustrations – think twisted humanoid torsos against retro-noir-like backdrops, partway between ancient architecture and cultish iconography – and Ward’s decidedly visceral VR work, which brings to life and expands Johnson’s imagery.

Further works
The exhibition at Heide will be bolstered by an exclusive selection of drawings and textile works from Johnson. Those include favourites never previously shown in Australia; a series of quilts made in collaboration with her mother, quilt maker Cynthia Johnson; and garments on loan from Romance Was Born, an Australian fashion label with which she created “these sequined ball gowns with alien orifices and worms extruding from them”.

Terminus is on display in Heide’s main galleries from November 2, 2019 to March 1, 2020. See details and book tickets.