Dan Rule chats with Misha Hollenbach about his exhibition at Utopian Slumps. 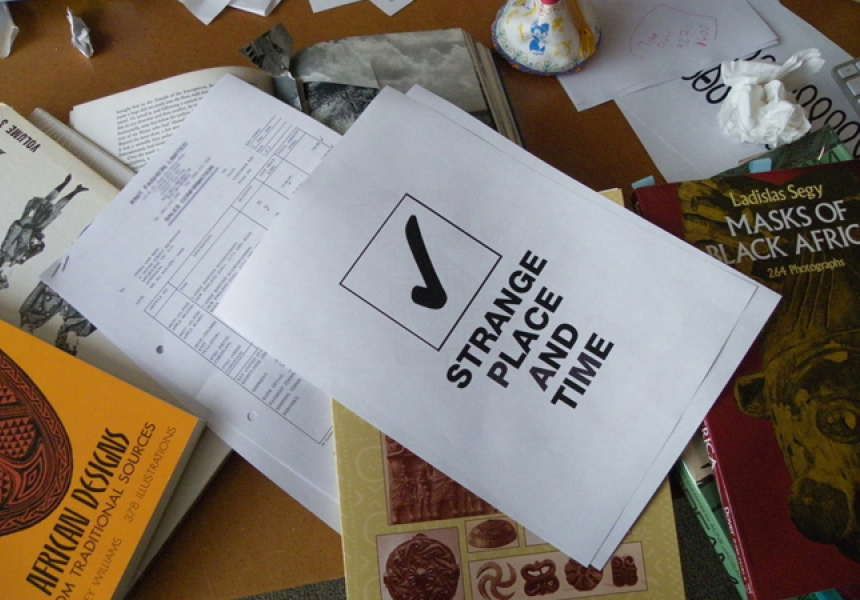 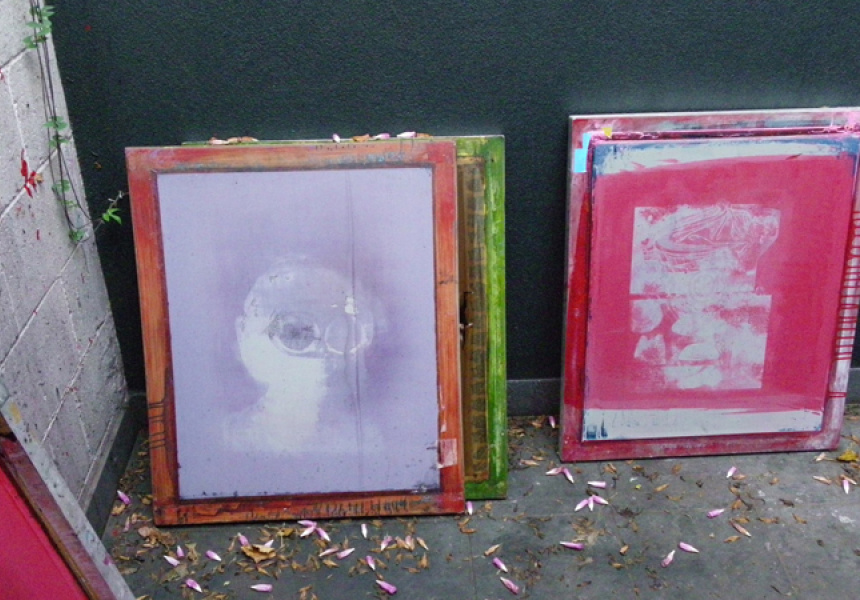 Better known as one half of eclectic husband-and-wife fashion and design duo Perks and Mini (the other being Shauna T), artist Misha Hollenbach likes to keep his creative practice on the home front. Hidden behind the Perks and Mini warehouse, which doubles as the garage and laundry of the couple's Richmond home-office, Hollenbach's studio is a magnificent mess of found objects, paint tins, paper scraps, general clutter and creative trash and treasure. We take the tour and chat with the internationally recognised artist about place, family, his unconventional process and his new exhibition at Utopian Slumps.

Is having a space in the home really important to you?

Yeah, actually, one of the things that’s a running thread through all of the things I do – whether it’s this artwork or our label or whatever – is that it’s part of our life. It isn’t just work or my art practice or my studio. It really is our life. It’s all day long and kind of moves in and out of itself.

Eventually, I would love if the studio got bigger and especially if it was in the countryside somewhere, but yeah, it’s a conscious decision to have the studio where we live. Just with the amount of projects we have going on and having a new child, it allows for me to nick down here for half an hour to finish something, then to nick upstairs to finish something else, then further upstairs to baby-sit the kid. So it just allows my art to be part of life rather than a separate chunk. It’s the best situation for me actually.

Your new show, and a lot of your work, seems to be about attuning yourself to the materials around you. I’d love you to tell me a little about that.

I think it’s about perception. It’s not so much about creating, but discovering and acknowledging and also filtering this stuff. Aestheticism, for me, feels sort of innate, but it also feels like it’s an artistic practice in the sense that it is practice and it takes a long time and I love this idea that you can go deeper into it. You can go deeper into researching or deeper into looking, and that’s kind of what it is for me.

Our everyday surrounds are so rich and I love the non-hierarchical quality of that kind of image search, where it’s not like a really intellectual, learned process – it’s much more natural than that – but it does involve fulltime looking and thinking.

Do you feel that you’ve acquired that ability over time?

I think so, I think I’ve been able to acknowledge that it’s something you can do and realised that it’s something I don’t ever want to switch off. Life seems so rich and our environment seems so rich, even in the most banal places, and you do find yourself in banal places. To kind of make the best of the situation, I try and find the things that speak to me, or have the potential to speak. “It’s hunting as well, which is a very primal, human thing.

Is getting away from your studio and immediate environment important to that?

I think when I do travel I really fill up. I fill up with ideas and I fill up with images in my camera and I fill up with bits of junk that I’ve found in the street, because I’ve actually been on foot for a long time, walking from place to place or whatever. So coming back feels quite calm, kind of like you’ve had a huge meal and you need to lie on the couch.

Then the digestion period occurs, looking back at all these ideas and all these things you’ve found. It’s a really nice process and it does follow the same sort of path as eating and digestion and really basic, primal, human existence. I’m really interested in art being part of that process, rather than this thing that is higher than us or completely intellectual. I like the process of eating; I like the process of finding nice ingredients and making a nice meal and sharing it with friends and collapsing on the couch; and I love shitting it out in the morning. I think I’ve been able to acknowledge an art practice that follows that same kind of cycle.

Tell me a little about your day-to-day working process in the studio.

I think I’ve acknowledged that I don’t get much time, so when I can have a minute then I just come down here and do some work. I’ve been lucky enough to channel that idea that things can be very quick and direct. I don’t have the time to sit down and ponder it. I don’t have the attention span actually. I don’t have the necessary skills to sit down and draw a super-detailed picture. So acknowledging all those things and channelling them into some sort of practice has been really fruitful for me. I think having a child really helps. My daughter is 10 months old and the last 10 months has been the happiest time I’ve had, through having a child, but also the most focussed and considered time in making artwork. It’s been a very focussing and grounding situation and it’s really shifted the balance for me to recognising a much bigger picture, which is the world and human life and realising that art fits into that. It’s not the most important thing in the world, or something to beat yourself up about or pursue in some serious way, but when you get to do it, it’s fucking amazing. It just becomes fun.

Tell me about the collages in your new show.

My practice is increasingly heading towards making things, rather than thinking about making things. I’ve always had this incessant need to pick up pieces of paper and crap, but not really known what to do with it, so I decided that I needed to start sticking stuff down.

I have a real problem putting my name to something, because all I’m doing as an artist is putting it out there. I author it or whatever, but as soon as I’ve finished it, it’s really out of my hands. It becomes cultural matter and then what I think about it or take from it is as valid as what you do, but no more valid. I love that idea, that you’re just taking stuff and then putting stuff back and it’s all part of a bigger energy, and if you make people smile and make people think a little, then you’re helping the world in some way, however small.