Starry nights on plates, and rivers in mugs, inspired by Scotland. 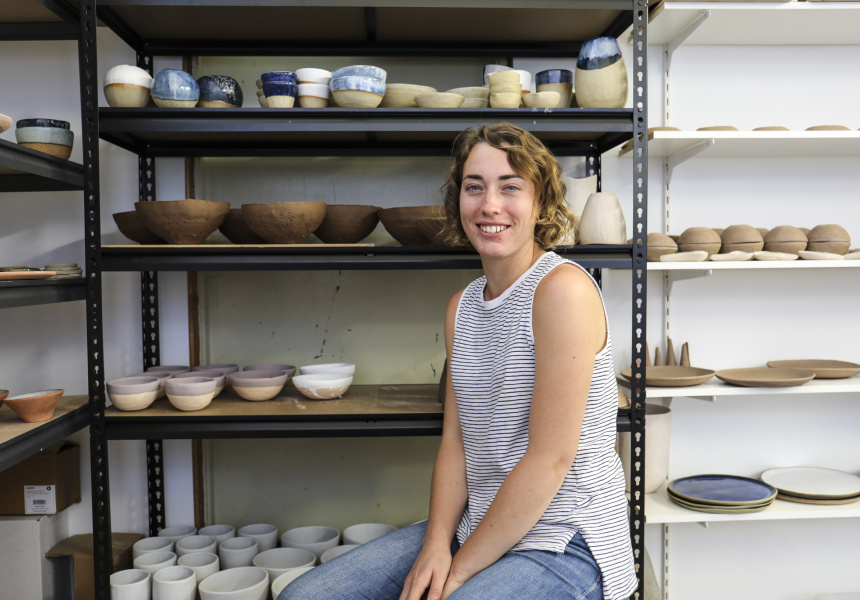 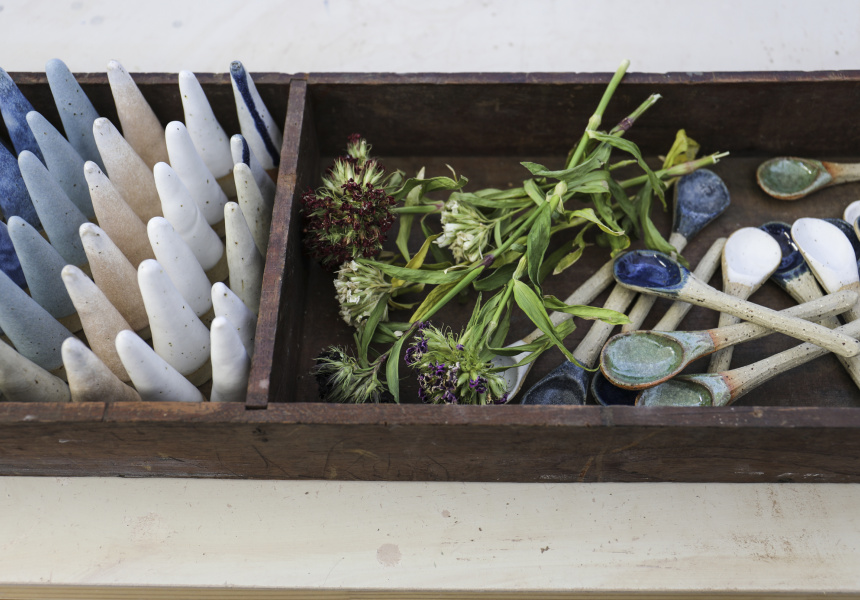 “I grew up on a farm in the hills and countryside,” the 28-year-old ceramicist says. “Scotland is so green and in winter it’s so rugged,” she says.

Now living in Melbourne, Cooper was born and raised in Perthshire, a rural county in central Scotland. The deep, mossy green in some of her pieces are obvious reflections of her home soil and its rolling pastures.

Her tableware and sculptural vessels are already a favourite of British food stylists (you can see her plates in Jamie Oliver’s Food Revolution) and are sold all over the world.

“The pieces are tactile, earthy and natural, I like to think they may go back into the earth one day,” Cooper says. Or, the sky. One of her trademark surfaces looks like a starry night: a dark blue glaze speckled with white.

Each piece is singular, with idiosyncratic marks and grooves.

“Because my clay isn’t thrown on a wheel, they never come out symmetrically,” Cooper explains. “They always come out slightly different, which I really like.”

A trip to China after college in Scotland cemented Cooper’s desire to make ceramics for a living.

“All the museums and shrines were so beautiful, and so were the glazes,” she says.

After China (and a visit to Australia) Cooper returned to London and took an evening course in pottery. She started her business in 2014 and moved to Melbourne in September this year for a lifestyle change.

At her Brunswick studio, tiles from China adorn the walls alongside greenery, collages, paintings and some of her own artwork. A banding wheel, which Cooper uses to pinch clay into organically shaped vessels, sits on a work table. The kiln – affectionately named Betty – has its own spot outside the room in the studio building’s entrance.

“My pieces all start from a ball of clay in my hands and in a way shape themselves throughout the process of pinching,” she explains. On the day Broadsheet visits, Cooper begins to work with folk music playing in the background. Effortlessly, a ball of clay evolves into a bowl with the help of handmade Scottish wooden rib tools. She uses a coarse forming tool to create her trademark textured edge. Cooper has a clear idea of how her pieces will fire – that is, the glaze that will result after it’s been in the kiln – but every now and then, “one or two do their own thing,” she says.

“These are the really special ones – it’s always nice to see people buying them at markets and appreciating the individuality of the colours and shapes.”

Her concern for, and relationship to, each piece is obvious as she describes two sky-blue glazed bowls with a texture similar to the ocean’s sandy shoreline.

“I love how the glaze collects around the edges, it’s almost like butterfly wings,” she says. “If you look up close you get that dappling effect and the flecks of pink.”