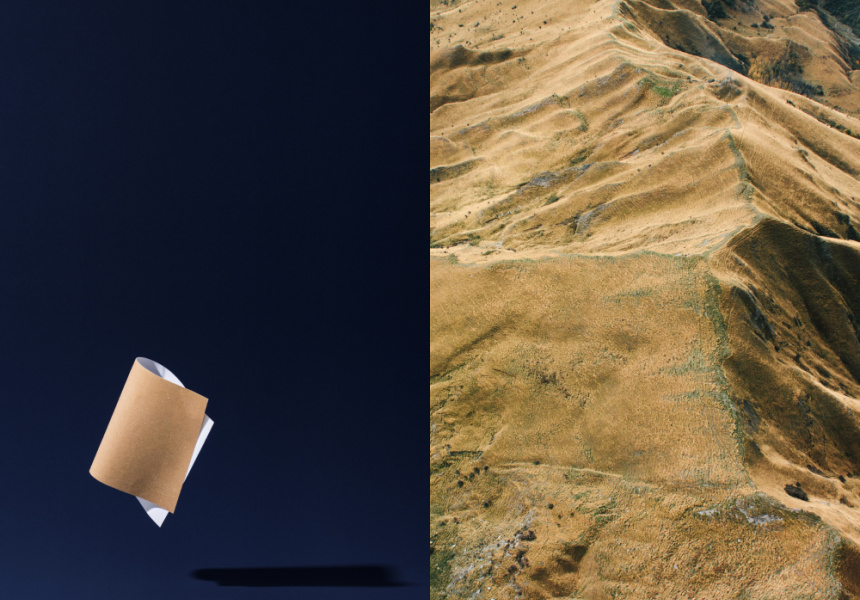 In the corner of their Smith Street shopfront studio, which they refer to as their “white cube”, Brooke Holm and Marsha Golemac pull their freshly mounted photographs out of the bubble wrap and take me through their work.

Dramatic images of snow-capped trees are accompanied by a close-up of abstract paper cuttings. The texture of a rippling ocean is played off against a sparse photograph of a lone seashell cast from clear jelly. “It took us a while to find that,” says Golemac, “but it’s really interesting that you can create something with nothing. It can take time, but it’s a basic, everyday item that we’ve made into something new. I think that’s what really makes us tick.”

The project started with Holm’s vast landscape photographs from all over the world. Each photograph is then matched with a conceptual response from Golemac.

The result is some striking juxtapositions that play with scale and work in the gulf between the vast and the miniature. Golemac describes how her responses to Holm’s dramatic landscapes come about: “It can be anything, really. It doesn’t have to have a meaning – it can be something that resembles the photo, or it can just be a texture.”

Holm and Golemac have been working together for three years. Most of that work is commercial; involving styling and photographing products. They’ve never done anything quite like this.

“We do have a lot of control over the work we do,” says Holm, “but having full creative control over something … there’s nothing like it.”

Despite the roles – Holm behind the camera and Golemac creating the stylised responses – the pair’s work is collaborative every step of the way. “We come up with weird ideas and then say to each other, ‘I don’t know how to do this’,” says Holm. “It’s always good to figure out the logistics of something we’ve never seen done, and don’t know how to do – we’re dedicated to finding a way.”

Workbook is launched 6pm–8pm on Thursday October 30 at 466 Smith Street, Collingwood, and then moves to Modern Times, 311 Smith Street Fitzroy, until November 16.

All are welcome at the launch, however RSVP is essential: studio@neilhugh.com.