Broadsheet is a proud media partner for Heide Museum of Modern Art.

The Stories Behind Timeless Featherston Designs

Grant and Mary Featherston are known for their pioneering modernist furniture and interior design. In partnership with Heide, we find out how their work is about more than just a comfortable place to sit. 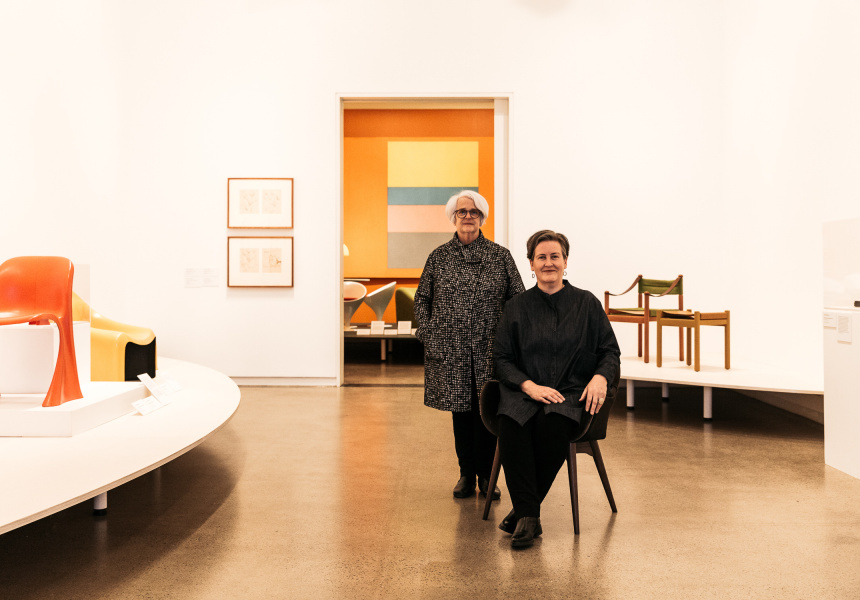 The Featherston name is synonymous with timeless Australian design. Belonging to Grant and Mary Featherston, the design power couple led the modernist charge in Australia from the 1950s onwards.

Their work was practical above all else, but also beautiful, elegant and simple. The clean lines and curves so favoured by the pair were not just the result of two brilliant minds working in tandem, but a product of their environment.

Their work is the focus of a new exhibition at Heide that explores their legacy. With the help of co-curator Kirsty Grant, we delve into some of the stories behind the display.

The R152 Contour chair
In the first room of the exhibition lies a burgundy-upholstered chair with the inscription “R152” on its plinth. The inauspicious name heralds a landmark of Grant Featherston’s early practice.

“He was responding to the new style emerging in architecture,” says Grant. “Houses were small, open plan and minimal. You could see the living room from the kitchen. Furniture had to be lightweight, functional, able to be moved, and couldn’t take up too much space, physically or visually.”

The story of the chair goes that in 1950, Grant tore a tram ticket in half and folded it, realising that by doing something similar with two pieces of plywood he could make a simple, curved and armless design, with tapered legs. There was nothing else like it on the market.

The Expo ’67 chair
In 1966, just a year after Grant and Mary married and began their professional partnership, they secured a major commission. Robin Boyd was designing the Australian pavilion at Montreal Expo ’67, and asked the Featherstons to create some chairs for it. But he also wanted the chairs to talk.

Each had built-in speakers. A pressure switch activated pre-recorded audio when sat in, delivering a snippet of contemporary Australians talking about Australia. “The idea was visitors to the Expo were on their feet all day,” says Grant. “This would be a relaxing way of learning about contemporary Australian life. To my knowledge there’d never been a talking chair before. And perhaps there hasn’t been one since.”

The chairs were a huge hit at the fair. The design was intricate and ingenious – speakers were cabled through the floor to tape reels in the building’s basement. But the outside remained simple and elegant. Though designed specifically for the Expo, today they’re commercially available, with a bluetooth update to the audio components.

The Nature Wall
Mary and Vicky Featherston Tu, who also designed the exhibition, collaborated on this selection from the family’s collection of organic objects. Featuring a bird’s nest, seashells, bark, bones and coral alongside photos of the duo’s interior design work, this wall was Mary’s idea and reflects how fundamental the natural world was to their practice.

“They would refer back to these objects a lot,” says Grant. “They’re not always direct links, but you can see it in their work. They would often seek out the structure of natural forms. Grant had a mantra: simple as in nature. He wanted to pare back the materials he used, and return to the source of it all. This is an intimate reflection of that.”

A photo of the duo in the new NGV building, 1968
A photo in the exhibition shows the elegant couple standing in the then newly opened NGV building on St Kilda Road, looking at the camera.

“They designed every moving fitting in the building except the phones,” says Grant. “Everything from the boardroom table to the storage cabinets.” The pair even designed the display cases they stand in front of in the photograph. Almost entirely glass, on a simple base, the cases artfully sink into the background. “I think lesser designers might have tried to make their work more visible, but these are designed to show off the objects they contain,” says Grant.

Fifty years on, and several major refurbishments later, elements of the Featherstons’ work remain. Grant has a simple explanation for the longevity of their work. “They were designing in response to human need,” she says. “It all has a purpose and a function.”

And it doesn’t hurt that it’s beautiful.

Design for Life: Grant and Mary Featherston is at Heide Museum of Modern Art until October 7. More details.

Broadsheet is a proud media partner for Heide Museum of Modern Art. Learn more about our media partnerships here