A giant television set sits down near the St Kilda beach ready to unveil its open air entertainment this summer. 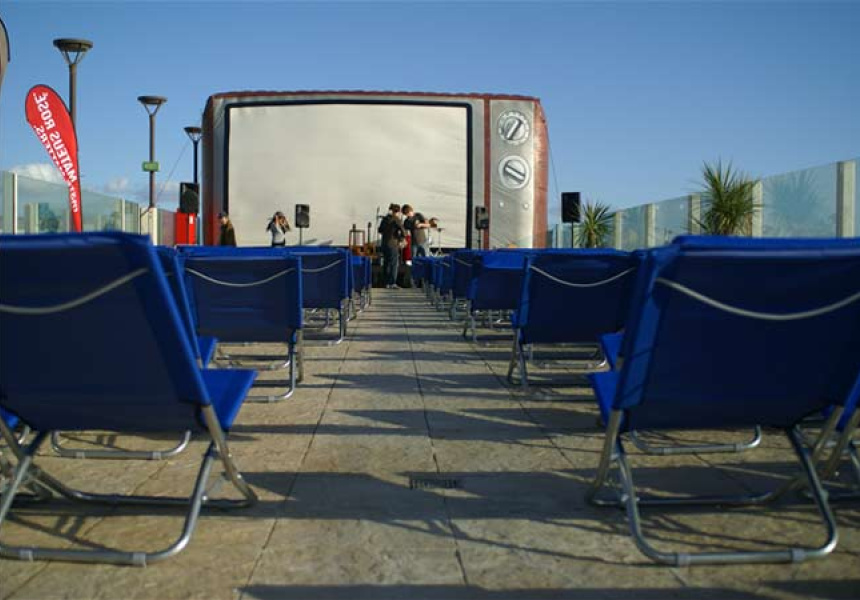 You might have glimpsed a giant television screen being assembled whilst strolling along St Kilda beach and wondered if it was a mirage. But no, this is a real oasis in the form of the St Kilda Open Air Cinema. Located on the rooftop of Melbourne’s Sea Baths, St Kilda Open Air Cinema takes the beach, sunsets, tunes, drinks and movies and combines them into a quintessentially summer event opening this Thursday.

The program features a healthy mix of cult favourites, classics, new releases and a handful of lesser-known films. Opening night features Exit Through the Gift Shop, a film that takes you on a whirlwind ride through the world of street art. Directed by the prolific and daring Banksy. Other notable films include New Zealand sensation Boy and the latest Harry Potter episode Harry Potter and The Deathly Hallows.

Bands play before dusk and this year’s musical line-up is just as good as the feature films. Make sure you get down there by 7pm to see some of Melbourne’s best local musicians such as The Polites, James Sidebottom and Leon Thomas play until the sun’s rays have disappeared into the horizon.

There bar and some snacks available or you can bring your own picnic - just make sure you leave the alcohol and glass wear at home.