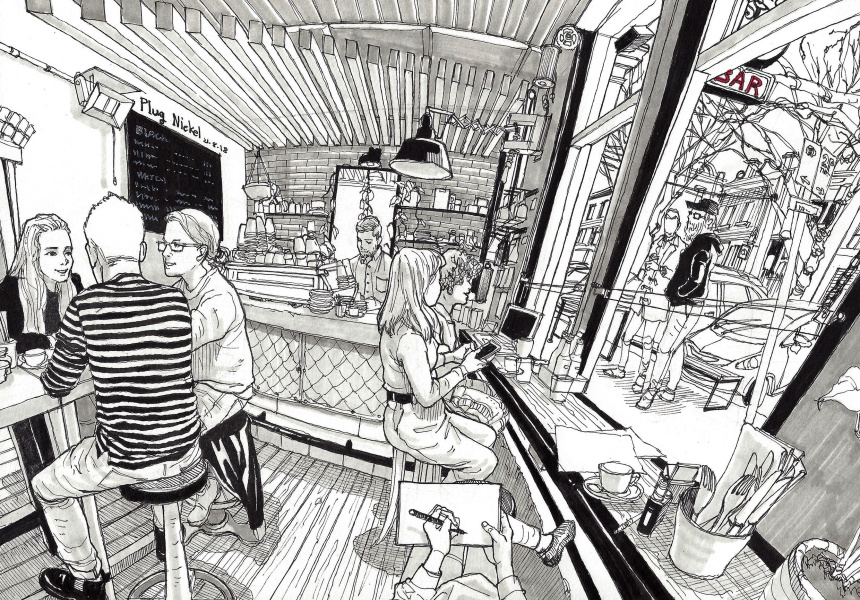 Seoul-born artist Jeesoo Kim is captivated by Melbourne cafes. So much so, she started drawing them, amassing an impressive collection on her Instagram account @pentraveller.

“When I moved to Melbourne I went to a cafe, and I just straight away [knew] – there’s [a] different vibe from anywhere else,” Kim says.

Kim began documenting the world around her when she was about eight years old, and she hasn’t stopped since. “I like travelling with my pen, so everywhere I go I have pen and paper,” she says.

When Kim first arrived in Melbourne to study at RMIT in 2013, she found the city's cafes provided an unhindered view of everyday Melburnians, often with their emotional guard down. She started spending hours drawing, fascinated by how much you can learn about a person through the subtlest detail.

"In South Korea, people don't...show emotions on their face, so it's very hard to catch something," she says. "[In Melbourne,] everyone...has [a] different life and I think it's just beautiful."

Kim is a fan of South Melbourne's St Ali, which inspired some of her earliest drawings.

“[It] doesn’t matter where I came from,” Kim says, adding that as a self-conscious newcomer to the city, she immediately felt welcome and accepted at the eatery. “I felt like I had to do something to [honour] them.”

Kim's account now has more than 3500 followers. Her comic-like drawings, with their fish-eye-lens view, seem like they could have been traced from wide-angle photographs, but Kim does all of her drawings from sight.

"When you see with your eyes, you see something more than just ... from pictures," Kim says.

At award-winning city eatery Higher Ground, she contrasts city workers in dark clothing against the light-filled space with its lofty ceilings, massive windows, and exposed brick. In Kim's illustration of Cup of Truth customers are reduced to outlines, layered one on top of the other, reflecting the hustle and bustle of Campbell Arcade. At Fitzroy's Industry Beans, Kim reverts to black and white to showcase the long, narrow interior flooded with light.

She's had a few commissions, too, from The Dessert Kitchen and Workshop Brothers.

Kim is working on a book of 100 drawings, which she hopes will come out in the next couple of months. After that, she plans to travel to other cities famous for their coffee culture, starting in Europe.

Above all, Kim draws these cafes because it makes her happy. "When I draw, I become the happiest person in the world ... as long as I can draw, I don't care about any other thing."