White Hand, 2012, Courtesy of the artist and Anna Schwartz Gallery 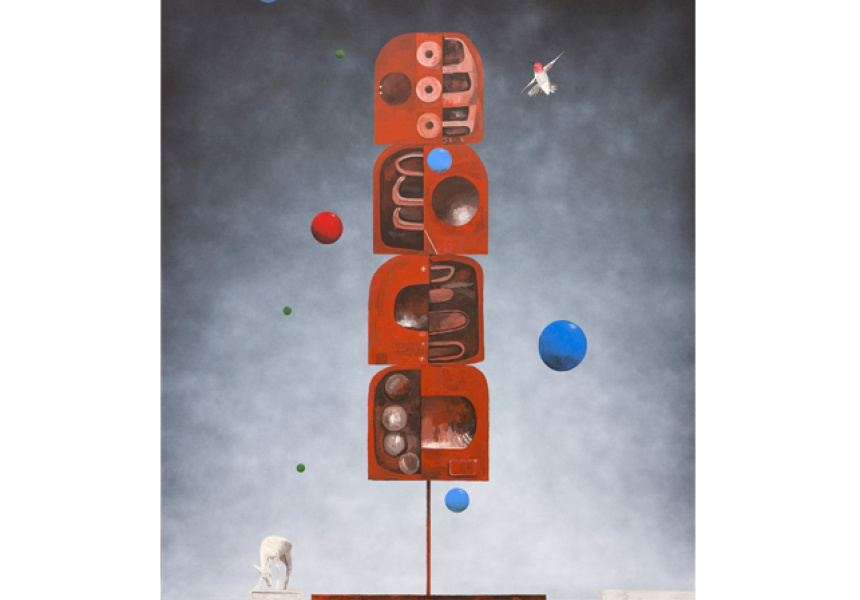 Blue Moon, 2012, Courtesy of the artist and Anna Schwartz Gallery

Though imbedded in the fabric of art history, Shane Cotton’s paintings don’t operate on an academic or particularly referential level. The lines that tether his work to various points in contemporary Maori art’s past are distinctly personal.

“I don't think of my work as definitive in any way at all,” he says. “It’s really just a personal evocation of ideas… It’s important to only have your own take on things.”

Cotton is referring to Smoking Gun, his stunning new suite of paintings showing at Anna Schwartz Gallery. Taking the first generation of contemporary artists to challenge the tropes of traditional Maori art as his cue, Cotton’s paintings recast a series of sculptures from the 1950s and 1960s, merging traditional totem-like figures with signposts of Western art. Indeed, Cotton’s paintings reveal cubist forms and Picasso-like touches amid more traditional folk-art motifs.

“Basically, these guys would take these sculptures – these forms of oddity – around to towns in the 50s and 60s and put them into community halls and show a Maori audience, who would be like ‘What the?’” he laughs. “So there are these beautiful photographs of the sculptures installed and you have these really quite crazy mixtures of styles and genres coming together, which creates a very bizarre sort of space and notion of how people negotiate that. You’ve got the known and the unknown and they’ve sort of collapsed together and you’re trying to negotiate and navigate the boundaries.”

What Cotton brings to the mix is a playful, surrealist inflection. Symbolic gestures, objects and beings perch and float amid his compositions. A target juts out at right angle; a blue moon hovers in the distance; birds soar; a traditional Maori horse carving looms over an oblivious pop-art bunny. Wisps of smoke permeate each work as if the residue of some kind of big bang.

Cotton, who is of Maori heritage, has built a career on his negotiations of New Zealand’s various artistic and social pasts. Though trained in the Western modernist tradition, the 47-year-old’s work has long incorporated and recast elements of traditional and contemporary Maori art as a kind of wider allegory for New Zealand’s bicultural identity.

Smoking Gun is no different. “It’s kind of this idea that at any point in a chronology, when something comes into play that is completely different, it changes the course of everything,” says Cotton. “Whether it’s a good thing or a bad thing, you can’t sort of halt it.

This is where the name of the exhibition comes in. “The analogy really is that in the 1800s and they introduced the musket – and they introduced it up north in an area where I come from – and the gun technology changed the history of New Zealand and changed New Zealand’s future dramatically for Maoris and Europeans. It was introduced in the far north and then northern tribes went south with new technology and just decimated what was in their path. The further south they went, the more tribes got the technology…and it was just like a stack of cards.”

But there can be positives amid such a rupture. Within the context of contemporary art history, where there’s smoke, there’s generally fire.

“These contemporary Maori artists of the time were really up against it,” he says. “They were being charged with degrading and prostituting Maori art by the traditionalists and it was really quite heavy.

“In effect, they were the ones who set the whole thing alight really,” he pauses. “In a sense, what they did was really quite heroic.”