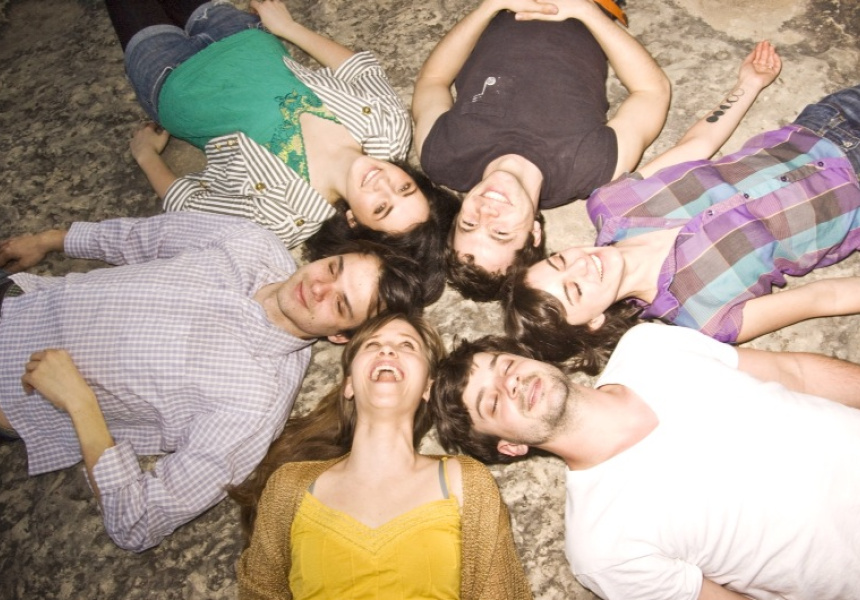 A conversation with Dave Longstreth proves a little spare for conventional adjectives or accepted musical phraseology. He speaks of music in terms of “nuance” and “collage”; he expounds his compositions as “little pieces of flowers”, as “intricate little patterns”; he sighs, digresses, laughs at random.

“I feel like words are just a set of bells or something,” he offers, falling quiet on the phone line in thought. “You end up harmonising them with the song in the same way that you harmonise the chords that you put under the melody or something like that. Finding the right set of words doesn’t just necessarily mean the ones that fit the contour of the line.”

It’s little wonder. In a little less than a year, Dirty Projectors – lead vocalists Amber Coffman and Angel Deradoorian, Nat Baldwin on bass, Brian McOmber on drums and third female vocalist Haley Dekle – have risen from a touring band barely known outside of their direct musical circles to one of the most acclaimed, in demand (not to mention hyped) acts on the planet. As if to illustrate the point, our telephone conversation takes place during a strict half-hour window of opportunity between rehearsals for a live, 15-piece chamber orchestra rendering of their 2005 opus The Getty Address at the Lincoln Centre in New York.

“We’ve been at it for the last month or so, learning how to play it, learning how to re-orchestrated it,” Longstreth explains, exhaling a lengthy sigh. “It’s been a challenge to configure and play live because it wasn’t conceived at all that way.”

Spend any amount of time with the Dirty Projectors’ music and you’ll discover a band whose sound palette extends far beyond that usually attributed to pop. Across six records – The Glad Fact (2003), Morning Better Last! (2003), Slaves’ Graves and Ballads (2004), The Getty Address (2005), Black Flag covers album Rise Above (2007) and Bitte Orca (2009) – Longstreth has defined his musical output on an intensely layered, interlocked and uncanny tapestry of styles, sounds and approaches.

The pop constructions of Bitte Orca, for one, comprise such a swathe of elaborate details it’s near impossible to trace how it all fits together. Voices, personalities and intonations clash and coalesce in full view. Perfect harmonies form from a rabble of shrill screeches and howls, flawless in their disarray.

“I love the idea that when you take out one element, the whole fucking thing falls apart,” urges Longstreth. “It’s that economical, you know? But it’s also that thing of if you add one more element it becomes lugubrious and over-orchestrated. It’s just awesome when music does that, when it pops in that way.”

In some ways, Longstreth’s widescreen musical vision doesn’t come as a surprise. Having grown up in New Haven, Connecticut, he began penning songs from the earliest of ages. “I wasn’t ever interested in knowing how to play music or play the guitar,” he says. “I had no interest in learning how to play All Apologies by Nirvana or anything like that. For me, it was always just about making a song.”

For Longstreth, music was about accumulating the tools to harness an innate will to create. “Before I knew a chord I remember making this song just with notes on the guitar and just writing linearly, I guess; writing melodies as opposed to chords. My brother played the guitar, so he eventually showed me how to play some basic chords and when I knew two chords I wrote a song with two chords and when I learned a third chord I wrote a song with three chords.

He went on to study composition at Yale, eventually dropping out to move to Portland, Oregon, and release his debut solo effort, 2002’s largely acoustic The Graceful Fallen Mango. It proved an important time in the development of his creative voice. “I totally hated any kind of remotely demonstrative instrument playing,” he recalls. “I thought it was completely indulgent and insincere and stupid.

“But that’s the thing,” he muses. “You start off with your intention of not wanting to know how to play anything, you know, and then that becomes a thing that has its own nuance or technique in itself.”

He soon returned to the eastern seaboard, where he assumed the Dirty Projectors moniker and began working with a rolling cast of musicians – including Vampire Weekend’s Ezra Koenig and Rostam Batmanglij and Ra Ra Riot frontman Wes Miles – many of whom would find Longstreth’s artistic directorship domineering. Indeed, former band member Larkin Grimm infamously described Dirty Projectors as “what happens when an egomaniac tries to control everyone”.

Recent years have seen a shift. While still very much in control, Longstreth surrendered his work to interpretation and collaboration more than ever before. Indeed, prior to Bitte Orca’s June 2009 release, the band joined forces with the legendary David Byrne to cut a track for the Dark Was the Night compilation, before being invited to perform one of Longstreth’s compositions with Bjork at a homeless benefit concert in New York.

When Solange Knowles released a melting RnB cover of Bitte Orca’s future-soul infused single Stillness is the Move (sung entirely by Amber Coffman), Longstreth embraced it with open arms. “I think Amber had actually heard it before me and was like ‘Dude, you have to fucking check this out’ and we just blasted it,” he urges. “It was just awesome. I think she fucking nailed it!”

Indeed, the sensibility that most characterises Bitte Orca is its stunning, ornate tangle of personalities and voices – from the serrated vocal gymnastics and guitar phrases of Cannibal Resource or the perfectly clumsy finger-picked guitar motif and lush orchestration of Angel Deladoorian’s solo track Two Doves, to the acrobatic guitars and underlaid groove of No Intention and the gorgeous maelstrom of Useful Chamber.

“I write all the arrangements and all the harmonies, but with this album one of the things I wanted to do was really make it feel like a band,” Longstreth says. “I really wanted it to have this sense of different personalities warring against each other or complementing each other.”

Longstreth may not have relinquished control, but his band is now at the foreground of his wild musical imaginings. “With Led Zeppelin or The Beatles, you hear these different personalities in conversation or equilibrium,” he says. “Writing for Amber and Angel – these two very strong, very different female voices – was kind of like imagining them standing in a garden full of flowers that complemented their colours.

“This band is like a family,” he pauses. “It would be depressing to me, and not really honouring the idea of playing music together, if it all just sounded like me.”

Dirty Projectors play the sold out Golden Plains festival on March 6-8 and The HiFi on March 9. $46 www.thehifi.com.au

Bitte Orca is available through Domino/EMI