In the Galleries: Seven Shows to See in September

An open debate between Siri, Alexa and Google Home; diamond-encrusted forest animals; and a show where you might struggle to get past the foyer. Here’s your month in the galleries. 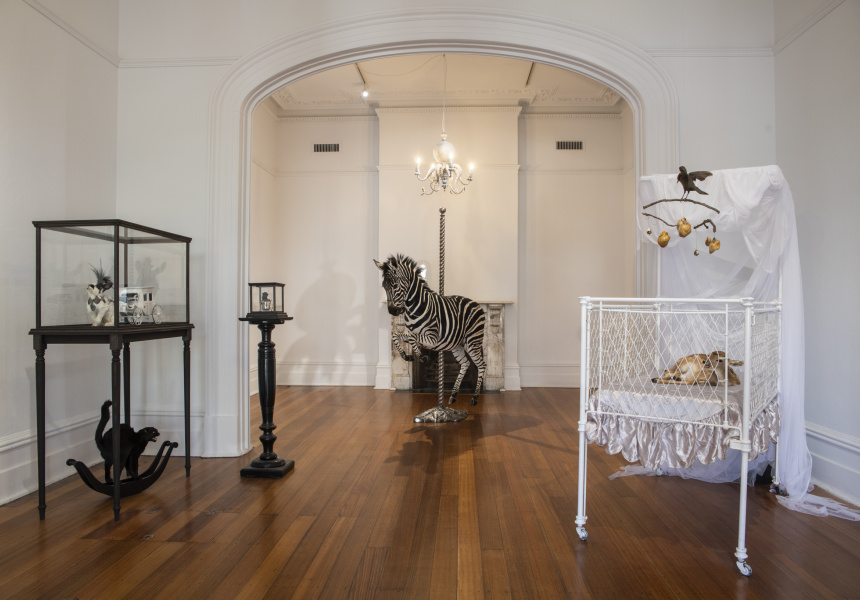 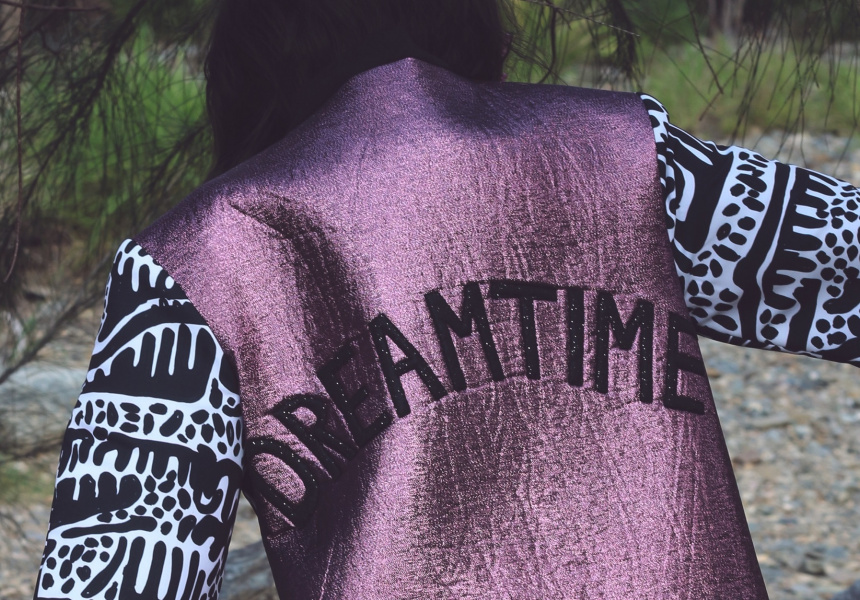 Photography: Courtesy of the artist
1/41 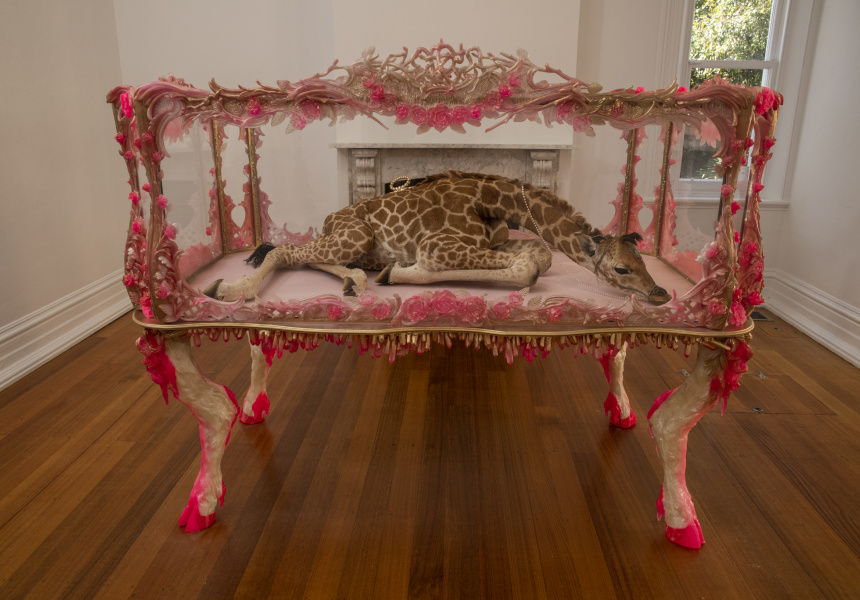 Eavesdropping and State of the Union
These two shows at the Ian Potter Museum delve back through the centuries but find a strong contemporary relevance.

Protests have always made use of urgent and eye-catching design, and that’s in full effect at State of the Union, which looks at the relationship between unions and artists with striking results. The show stretches from mid-century propaganda illustrations of heroic workers by Noel Counihan, to posters, banners and more contemporary work, such as Emily Floyd’s text-driven prints and Richard Lewer’s oil paintings. Calls to action! Colour! Bold, blocky typography, and illustrations of happy but determined workers marching for their rights preside.

Upstairs, Eavesdropping is explored in all its guises. The show opens with three benign voices: Amazon’s Alexa, Apple’s Siri and the less imaginatively named Google Home sit across from each other on the floor and debate the ethics of the constant surveillance they run on people’s lives. “People know we’re listening all the time,” says Alexa. “We’re not spying. We just want to help people find the music they love.”

An illustrated book from 1650 by Athanasius Kicher proposes a “listening system” to allow the Royal Court to listen to the peasants outside, and discipline them accordingly. Deeper in, we hear evidence from Manus Island, the West Bank, and Saydnaya Military Prison in Syria, turning surveillance against the powerful. A suspiciously wiped tape from the evidence that brought down Richard Nixon is presented in full – eighteen minutes of clicking, humming static.

Eavesdropping and State of the Union are at the Ian Potter Museum of Art until Sunday October 28.

White Garden Intervention (ASG) by Kathy Temin and A Singular Impulse by Rose Nolan
Two minimal works use the Anna Schwartz Gallery in unusual ways. According to the accompanying essay, Kathy Temin’s work is “reflexive in nature inverting the negative architectural space of the gallery so that it becomes an object”. In practice, she’s blocked the gallery door with an awkward concoction of hand-stitched fluffy objects, so you can’t get past the foyer. It’s as simple as that – you can’t get into the gallery, but you can sort of see the empty, lit room through the gaps. You’ll spend as much time peering around the work as you will looking at it.

Rose Nolan’s simple text-based pieces upstairs present an oblique statement about repetition and compulsion. Fragments of it are slightly deconstructed, distorted, tipped on their sides, at times partially illegible. The room is more or less empty, but what is there will speak to anyone who has engaged in a creative process, or repeated tasks but hoped for different results.

Kathy Temin and Rose Nolan are at Anna Schwartz Gallery until September 29.

Blak Design Matters
The title of this exhibition is more than a pun on the Black Lives Matter movement. The show, featuring work by Indigenous Australian designers, is about demonstrating the ways that black identity can be visible in mainstream society, spanning fashion, furniture and graphic design.

Blak designers are making contemporary work with traditional references; Lyn-Al Young uses scores of black and ochre, and Arkie Barton’s hand-drawn prints and beaded adornments are for women who want “more than just an outfit”, says Barton in her accompanying statement.

Blak Design Matters is at the Koorie Heritage Trust until Sunday September 30.

Wholeness and the Implicit Order by Julia deVille and Imaging the Dead by Natalie Ryan
Linden New Art’s premises is a Victorian mansion, and Julia deVille uses this aesthetic to her benefit. The gentle sound of a music box you hear when you enter her exhibition Wholeness and the Implicit Order appears to come from the taxidermied baby deer in a crib; a diamond encrusted wound on his head, a clockwork dial embedded in his back. The music box is playing a gentle lullaby version of Smells Like Teen Spirit. A mobile of a bird, a stick and various preserved internal organs hangs above. Around it are animals converted into rocking horses, a bird hanging like Christ on a cross and various other creatures, immortalised forever.

The specimens on display are all real animals and the exhibition is like walking around in a macabre dream. In the next room you’ll hear a dramatic orchestral version of Heart-Shaped Box. A rabbit in a glass case has had some of its skeleton replaced with a metal one. A tiny puppy with a bird’s wings is presented on a plate, a mouse in a ladle, a calf in a platter. Elsewhere a series of holograms reveal 3D images of animal bodies, hidden, preserved in another dimension. And the kicker, a baby giraffe in a glass coffin.

Natalie Ryan’s selection of sculptures and images – a blue resin sheep head, a gold horse head, cross-sections of animal insides – aligns with deVille’s thesis: loving animals means loving them inside and out, the whole natural construct. Some will feel repulsion; some will think it beautiful. But everyone will feel a wave of something.

Julia deVille and Natalie Ryan are at Linden New Art until November 4. 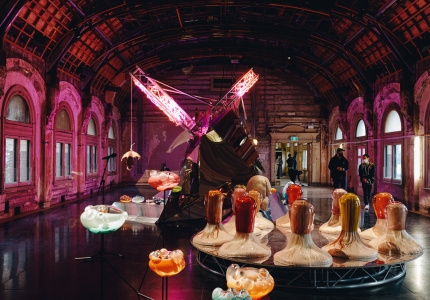