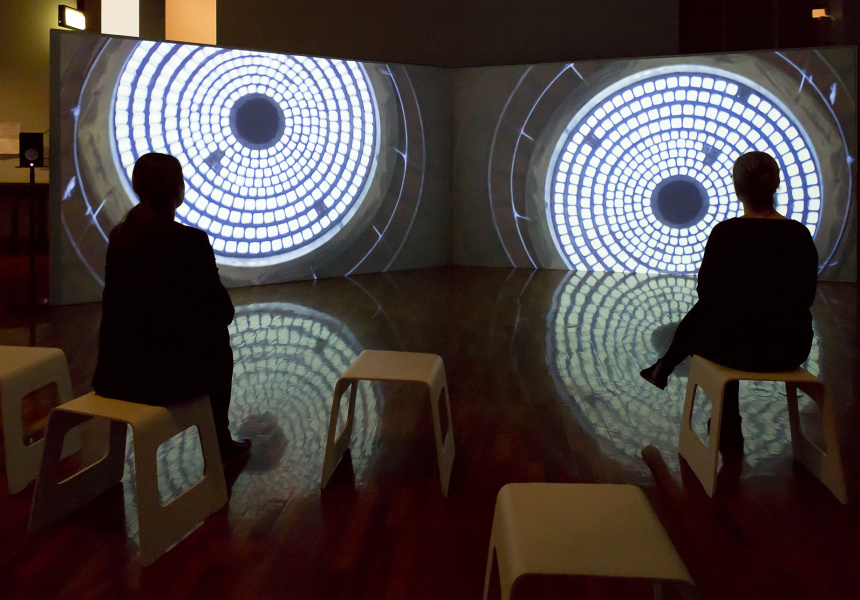 Centuries ago, musical notation was standardised into the lines, dots and Latin terms we recognise today. But how can such an emotive, endlessly re-interpretable artform be boiled down to a rigid system of rules?

The Score, a huge new exhibition at the Ian Potter Museum, is about alternative visual representations of music. The featured artists and composers have gone beyond treble clefs, five-line staves and quavers to represent music in a way that standard notation can’t convey. The results are endlessly inventive.

“What we see on the page is a result of centuries of experimentation,” says Jacqueline Doughty, the show’s curator. “Putting pitch and rhythm and tempo onto a piece of paper isn’t easy.” Standard notation is a compromise. Take the drones and long sustained notes in contemporary electronic music, for example – how do you capture those?

“For me it’s about translation,” says Doughty.

The most intriguing piece is “A Galaxy of Suns” by Michaela Gleave, who has translated the position of a cluster of stars into music. A live, 36-part choral performance of the piece will take place in the gallery in October: live both in the sense of it being a live performance, and that it will be a live and immediate translation of the stars’ current positions. The choir, snaking up the building’s central stairs, will literally be singing the stars.

Angelica Mesiti has translated a Morse code message into giant wind chime, which she’s then translated into percussion, which has then been interpreted as dance.

Nathan Gray has converted two pages of experimental notation by composer Cornelius Cardew into a large sculpture. Performing the score involves physically interacting with it.

These aren’t just theoretical ideas; they’re visually exciting as well. 1950 paintings by Ludwig Hirschfeld-Mack show sound as waves of light around abstract human forms. Dylan Martorell’s scores are based on natural forms like plants, and are somewhere between botanical illustrations and technical charts.

Cubist and futurists were already thinking about music in abstract painting as far back as the 1900s. “There are strong correlations between the development of abstraction and the way that people were making analogies between sound and colour,” says Doughty.

For Doughty, the starting point for this show was seeing graphic notation from the 1950s. “Composers were coming up with their own idiosyncratic symbols to represent music. Geometric forms. Squiggles. I’d never seen anything like them.”

The Score is at the Ian Potter Museum of Art until November 5. A performance of Michaela Gleave’s “A Galaxy of Suns” will take place on October 10. Tickets are available here: