We chat with Saskia Folk, a photographer with a particular fascination for rusty metal panels from broken down cars found in the depths of the Australian desert. 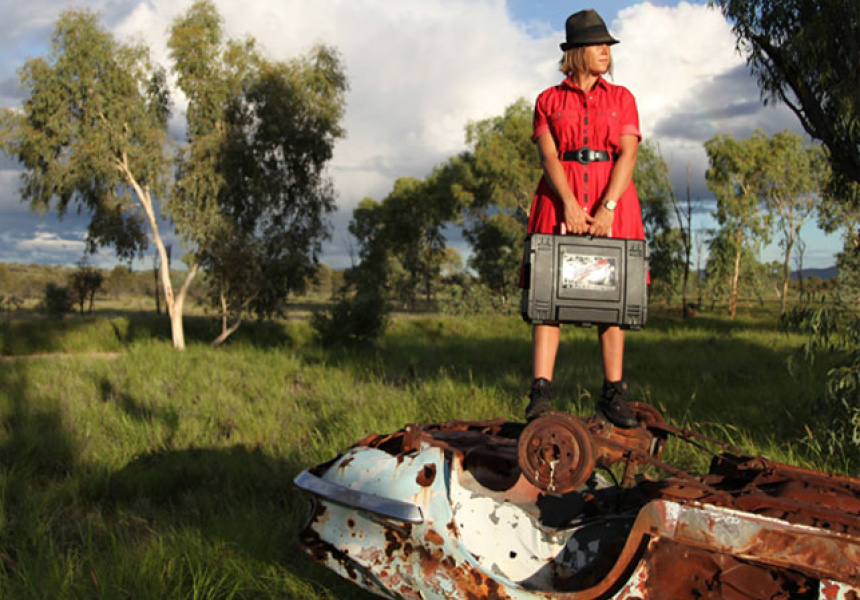 Originally from Melbourne, Saskia Folk has spent much of the last couple of years in Alice Springs, working as a field officer for the Western Desert Art movement, stretching canvas, mixing paints and making tea runs for local Aboriginal artists. Most of her time was spent making the long commute between Kintore and Kiwirrkurra, 530km and 750km west of Alice Springs respectively.

Along the way, Folk would come across broken down cars left to decay in the desert. Suffice to say, she became fascinated by their weather-beaten qualities, hues and textures, and in her spare time began rummaging around tips and retracing her steps to find cars in the desert with bits and pieces that had rusted away “just right”. “I take pieces of the cars that I think are really beautiful in some way or another,” she says. “The door, or the bonnet, the boot, the side panels.”

She describes the rusted chunks of metal as “ready-made art”, with the harsh desert weather creating the unique colours and textures on the panels.

“A lot of them look like landscapes already, just in the way the weather has affected them. So it does look like I have manipulated the surfaces when in fact I haven’t.”

But this doesn’t mean Folk isn’t willing to get her hands dirty. She may now own a cordless angle grinder, but it was no small feat when she managed to remove her first car door with the help of a measly hacksaw.

“Some of the car panels can be really buckled,” she says, “so I used to run over the pieces of panel with my car to flatten them out.”

It has taken Folk eight months, but she has finally hacked through enough cars to put together an exhibition, due to open this Friday at Scott Livesey Galleries in Armadale. Featuring 30 pieces (out of a possible 60), the works vary in size from small 10cm x 10cm works up to that of an entire car bonnet.

“My garage is completely chock-a-block with all sorts of different things, but I wanted to select pieces that went well together and keep the other ones for shows that I’ll hopefully be having in the future,” she says. Folk describes the cars as becoming part of the desert circle of life, affected as much by the weather as the surrounding landscape is. Removing them from the desert and placing them in the gallery environment “completely changes the panels and as they are not associated to the car anymore, there is no way to tell if they used to be a Ford or a Holden or a Mustang.”

“I think they’ve all got a story,” she says. “A bit like in an abstract paintings, different people read into the pieces in a number of different ways.”