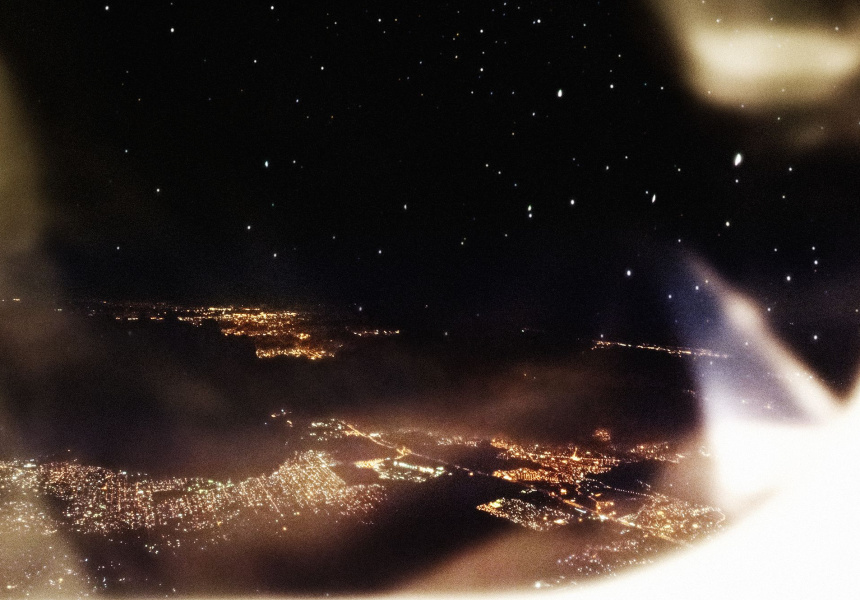 “The central focus of the show is my experience at Cherry Springs,” says Shmith. “I spent eight hours at a time, just staring up and contemplating. I looked longer than I’d ever looked. As a place to contemplate these huge things, it’s a sweet, homey place. Very American.”

When I talk to Shmith about his work, he mostly wants to talk about astronauts. Kittinger, who did the 30-kilometre skydive, was an air-force pilot before the space program existed, and his jump was intended to test a new high-altitude parachute. He was one of the first to see the curvature of the Earth, and took the first step on our path to space. “He was a hardened military type, and a scientist,” says Shmith. “But he and a lot of other astronauts had these spiritual experiences and didn’t know what to do with them.”

As one returning astronaut said, they really ought to have sent a poet.

Shmith’s photographs, like his ideas, are big and enigmatic. What might at first look like blurry landscapes and ethereal skyscapes are in fact digital collages: images picked from Shmith’s archive and re-appropriated into new composite images. The first work in the show, for example, is a night-time horizon, the lights of a town below and the bright, motion-blurred stars above. “It’s not physically a picture of Cherry Springs,” says Shmith. “It’s a picture of my experience of Cherry Springs. I might have shot some of it there. I’m not sure. But this is a recollected experience.”

Perhaps, he says, rather than photography, it’s more like painting, taking colours and textures and creating an imagined representation.

Kittinger’s descent is explored in a few of the show’s most-captivating images: a tiny indistinct figure falls through a vast, billowing cloud. Other shots reflect vastness and descent: city lights from an airplane window, for instance, and a tiny portrait, mounted about eight feet from the floor, of a woman and child on a rollercoaster, eyes closed, holding hands, ready for the plunge. All the works hide in simplicity, but carry the weight of the cosmos, just hinted at through their titles. Untitled (Two Moons, Michael Collins), for example, references Apollo astronaut Collins’ claim that after his return to Earth, he had two moons in his head: the one he can see from Earth, and the one he saw up close. “Every time I think about that I get goosebumps,” says Shmith. “It’s an extraordinary perspective.

“Emily Dickinson said that if we had even the slightest definition of life, then ‘the calmest of us would be lunatics’,” says Shmith. “People with the solid knowledge of the scale of things … I don’t know how they cope, day to day, with the small stuff.”

Cherry Springs is at Arc One until December 5.