As one of Australia’s few Indigenous architects, Rueben Berg works to build connections between design professionals and Indigenous culture. 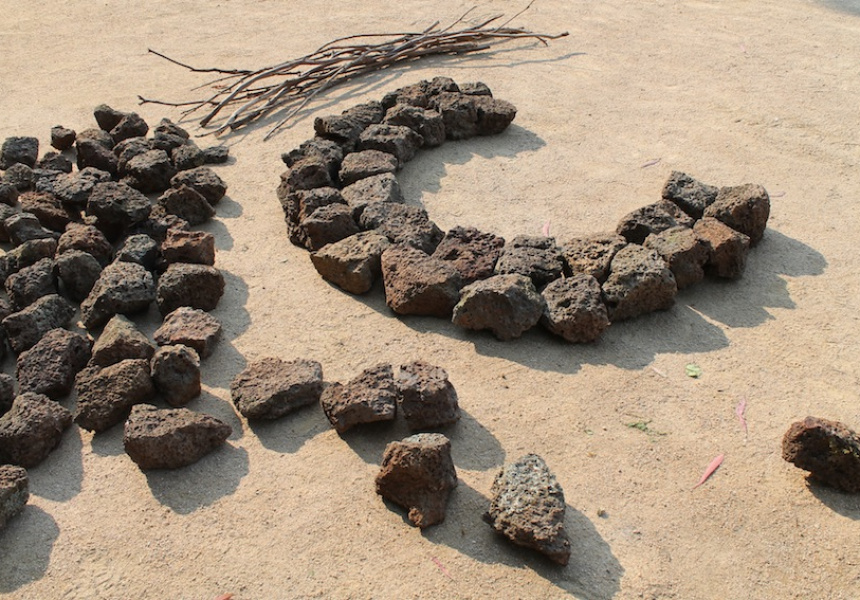 “An architect might have a site and say, ‘This was a dairy 100 years ago.’ But what was it 1000 years ago? Or earlier? What is that history and how can you tell that story through architecture?”

Rueben Berg is a Gunditjmara man, architect and co-founder of Indigenous Architecture and Design Victoria (IADV). The organisation exists to strengthen culture and design in the built environment, and encourages architects to consider Indigenous place and culture in their designs. “There is so much to be inspired by if you look at a site’s Indigenous history,” he explains. As Rueben says, a project doesn’t have to be Indigenous to draw inspiration from Aboriginal culture.

Indigenous life in Melbourne can be traced back 40,000 years. The earliest evidence of Aboriginal life was found in the Maribyrnong River valley, around Keilor. There are heritage sites all over the state, from artefacts and ancient stone formations, to meeting sites and scar trees. Rueben points out that when we think of Aboriginality we often conjure up dot paintings, the desert and Kakadu before thinking of Victoria’s own Indigenous culture.

Rueben founded IADV with fellow Indigenous architect Jefa Greenaway when he noticed the divide between Indigenous culture and design culture. “Jefa and I thought we could set up an architecture practice and do the design work, but that doesn’t actually help bridge that gap between architecture and Aboriginality,” he says. “We realised we could help everyone work together in a broader sense, and facilitate those connections.”

Through IADV Rueben hopes to alleviate the challenges designers and Indigenous communities might face when working together. Representing an Indigenous culture through design, or working with a protected site can be complex. “It is tricky to navigate and that’s why we are there … people often get upset because these are contentious issues they feel passionate about. It is important to come at it from the right place and understand the concerns.”

Rueben explains that when working on projects for the Indigenous community there are, “subtle and nuanced ways you can embed culture into design.” Recently he has been working with the Aboriginal Childcare Agency. He’s been consulting with the Aboriginal community on what it needs in a healing centre and how it could represent their culture. He’s working with the architects on the design and what’s culturally appropriate. Indigenous culture can be expressed in a multitude of ways through design. As a few examples, Rueben suggests dedication to sustainability, a connection to the land, expressing local materials such as timber and stone, opening up spaces to the outside, using native planting or incorporating artwork. But he thinks the best projects find a unique, tailored way to express culture.

“Architecture is all about culture. So the way a building is set up, the way the spaces are placed and orientated, reflects the culture.” Rueben sites Gregory Burgess’ Institute of Koorie Education as a good example. After consulting with the institute, it became apparent there wasn’t a strong hierarchy between staff and students. “So they didn’t separate the spaces. There is a kitchen everyone uses and the offices are intermingled with teaching spaces, because that’s how they operate culturally. It shows how you can use a building to reinforce and shape a culture.”

Rueben has also explored place through traditional Aboriginal architecture. In 2012 he built a stone house in Federation Square and Birrarung Marr as part of the Melbourne Architecture Annual. He collected the stones from Heywood in south-western Victoria, where there’s historic evidence of a large, settled Aboriginal community and stone houses. Rueben asked permission from the local Indigenous group. Then he reconstructed a stone house opposite Flinders Street Station.

Through the stone house project he wanted to build awareness that vibrant, sustainable communities existed in Victoria for thousands of years. “I built it every morning, and took it down at night – I thought it was important for people to see it being built,” he says. And what was the public reaction? “Some people were fascinated and came to find out more. Others were asking, ‘What’s going on here?’ But my favourite was when people would walk past and say, ‘Oh yeah, Aboriginal people had houses, that’s cool’.”

Indigenous Architecture and Design Victoria and the Victorian Young Architects & Graduates present a discussion on Indigenous housing on Monday July 7 at 6.30pm, as part of the Process architecture talks at Loop, Meyers Place, Melbourne.

Rueben Berg will be interviewed on 3RRR’s The Architects on Tuesday July 8 at 7pm.

Go to iadv.org.au for information on Indigenous architecture and design resources, news and events.