How one man made the largest mural in the southern hemisphere. 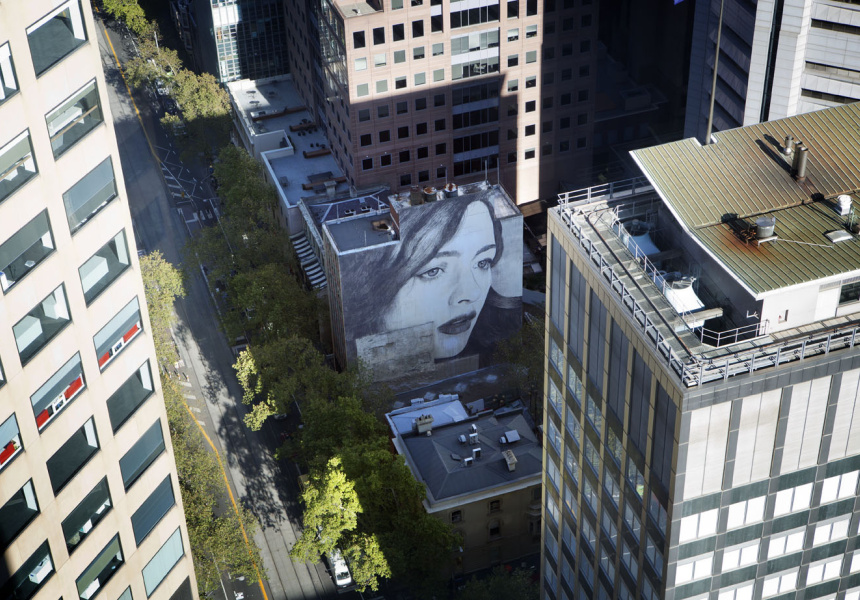 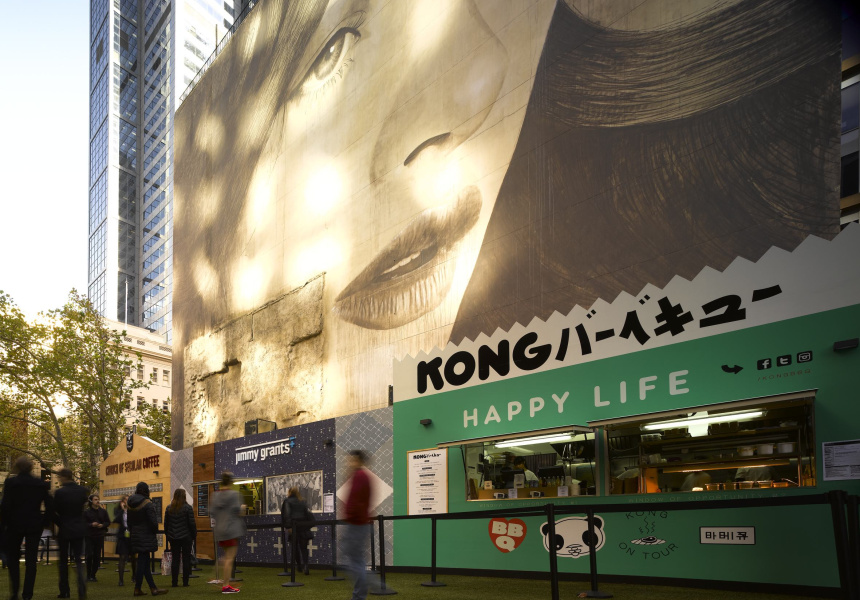 You’ve probably seen it by now. At number 80 Collins Street, the Paris End, someone has painted an eight-storey mural of a girl’s face on the side of a building. In a single shade of mission brown, 20-year-old model Teresa Omen is like a sumptuous Godzilla, with her lips apart and her dark hair tumbling 20 metres down the facade. Grand visions aside, there’s an obvious logistical issue. Namely, how did someone do that?

That someone is Rone, an unassuming 30-something with long hair and black glasses. We meet in his Collingwood studio, which he shares with EverFresh, the collective of the who’s who of Melbourne street art.

"I didn’t even bother with a matrix,” he says of his method. “You know how you divide an image into small squares and then concentrate on copying each square? I knew that wouldn’t work on something this big, so I didn’t bother.” Instead, he describes how he lay an A4 version of the drawing over a photo of the wall, and then aligned the drawing with cracks and other imperfections in the concrete to guide him as he painted up close. “It was scary,” he says. “In the studio, if I put the mouth in the wrong place, no worries. But out there, everyone was watching.”

For Rone, this latest piece comes after a decade of painting women’s faces in Melbourne alleyways. If you had a passing interest in graffiti the early 2000s, you’ll remember posters of a tearful, pouting lady rendered in monochrome appearing pretty much everywhere. This was Rone’s work; a 21-year-old skater and graphic-design student from the burbs with a social-worker mum and a car-painter dad. No one knew who was behind the posters until November (the the now defunct skate-wear company, not the month), figured it out. It asked him to take over its artwork, which he did with gusto while his classmates did assignments. After the November gig, he returned to murals, which he’s done ever since.

“I can’t believe this is my job,” says Rone, shaking his head. “When me and the other guys started there was no way you could make a career out of it. But now, some guy I met the other day told me he’d done his first piece on a street corner. He said he was working towards an exhibition and I was like, nah, you’re thinking about it in the wrong way.”

For Rone, graffiti’s shift from underground pastime to state sanctioned art form is bizarre, if not somewhat tasteless, but he’s happy at the life it has afforded him. He describes seeing his own work at the National Gallery of Australia as “surreal”, and people recognising him as “surprising.”

“While I was painting the building, I turned around one day and someone in the opposite building, like 10 storeys up, was holding a sign that said ‘Rone’. Nothing else. Someone just wanted to say they knew who I was. I was pretty happy about that.”

So how did this monster mural commission come about? QIC Global Real Estate, the company that owns Nauru House and most of the Collins-Exhibition corner, installed a pop-up street-food quarter called Rue & Co. Managing director Steven Leigh approached Rone for a mural above the food vans. “He wanted something small,” smiles Rone. “And I saw the wall and fell in love with it. I knew I had to do it all.”

In the end there was no wiggle space in the budget, so Rone paid for the boom lift he used out of his own pocket. “But the reception has been totally worth it,” he smiles again. “And, you know, my own grandmother, who’s known what I do for years, saw an article in the paper and it finally clicked for her. She was so thrilled that I paint street art, and that’s got to be worth it just on its own.”