Initiation_OA_RR was one of the jewels in the crown of Rising festival, devastatingly cancelled due to Melbourne’s snap lockdown. But restaurateur Rinaldo “Ronnie” Di Stasio has scooped it up for his brutalist CBD restaurant – struck by the parallels between the veteran Melbourne artist’s coming-of-age tale and his own. 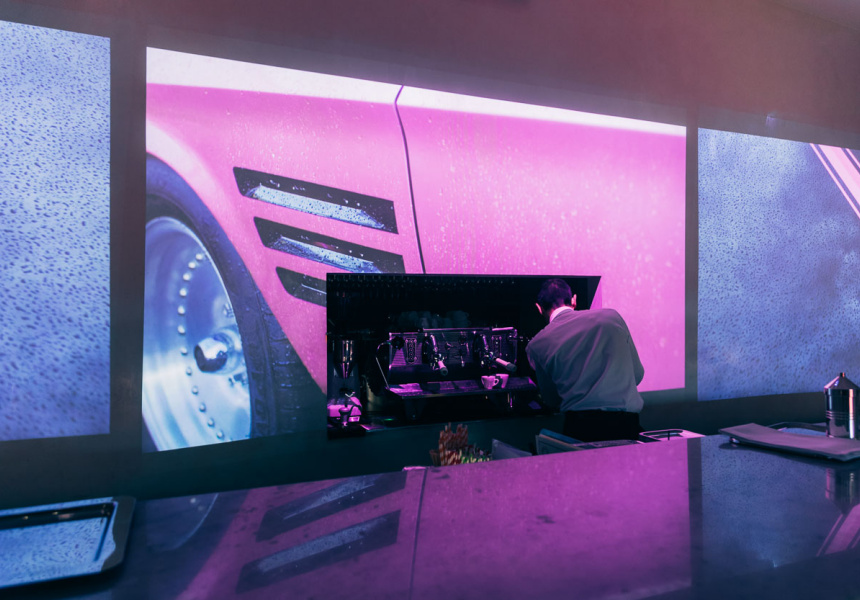 Kamilaroi/Gummaroi/Gamilaraay artist Reko Rennie’s grandmother, Julia, was forcibly taken from her home and family at the age of eight, in the name of a legalised policy of assimilation. She was forced to spend her childhood working on pastoral stations.

It’s an unbearable trauma Rennie has addressed in his work before; most notably, perhaps, in his first monumental three-channel video installation, OA_RR.

If you’ve been to Di Stasio Citta, you’ll know it – it’s graced the wall behind the sweeping marble bar for years. In it, Rennie returns to his grandmother’s Country in a Rolls-Royce covered in his signature geometric camouflage. Rennie says he’s heard early-1900s pastoralists – some who enslaved Indigenous men, women and children on their properties – would arrive at church on Sundays in their Rolls-Royces or Bentleys. Rennie instead rips spectacular red-dust-raising burnouts, referencing traditional Kamilaroi sand engraving.

This imagery has become as much a part of the Citta experience as being welcomed in the beautifully brutalist entryway by a white-jacketed waiter, the luxurious red-leather chairs or such menu favourites as the capellini con granchio (handmade crab pasta).

But now Rennie has brought to life another treasured piece of his grandmother’s story in the new three-channel video installation, Initiation_OA_RR, which is projected behind the bar. It’s a permanent home for the work commissioned by Rising festival, which had to be cancelled last-minute because of lockdown.

“[My grandmother] had this beautiful soprano voice and she’d won an eisteddfod,” Rennie says. “She was offered a scholarship to study music and [her adopted] family didn’t allow her to go. So that shattered her dreams of performing”.

Rennie has always felt his success as an artist was because of her. “I owe it to my grandmother, hence the soundtrack,” he says. That soundtrack is an original operatic score written by Yorta Yorta woman, composer and soprano Deborah Cheetham AO – and performed by her together with 47 musicians and a conductor from the Melbourne Symphony Orchestra. As show-stopping drone footage captures the back of a souped-up hot-pink Holden Monaro cruising through the darkened streets of Melbourne’s west, Cheetham’s voice soars with a modest yet powerful set of lyrics.

As well as being a stirring ode to his grandmother, Initiation_OA_RR brings to life Rennie’s own story – his coming of age in the western suburbs. “I was born in an urban environment where traditional notions of initiation were experienced in a completely different way to my ancestral home.” He grew up in a working-class community where “everyone’s parents were working night shifts and struggling while extended family members were living together, supporting one another. [My grandmother] practically raised me while my mother worked seven days a week to put food on the table.”

The lamp-lit streets of the west carry a raft of memories for Rennie. “From learning jiu-jitsu from the age of five, to run-ins with law and justice, to testing boundaries and trying to understand my place in society. There were positive influences at times but there were more negative influences for me in these spaces and luckily that’s where I left them.” The impressive cinematography takes in such sites as the docks, the Altona oil refinery and streets from Footscray to Williamstown, combined with close-up shots of the Monaro’s seductive lines and Rennie – cool, calm and collected – in the driver’s seat. “The various sites in the work represent my coming of age through experiences that brought trauma, love and loss. That was my initiation.”

It’s a coming-of-age story which, in some poignant ways, reminds restaurateur Rinaldo “Ronnie” Di Stasio of his own upbringing. The son of Italian post-war migrants who settled in Thornbury, Di Stasio spent much of his adolescence feeling like he never quite fitted in – not quite Australian, not quite Italian – an uneasy condition felt by many migrants and their children in Australia, even today. “I spent all my time alone and it wasn’t until the age of 22 that I went to Italy and realised, this is where it is.” It was that year in Italy that inspired Di Stasio’s trademark term “Italianality”: “a vision bridging a unique sense of my Australian and Italian identity”.

Di Stasio purchased Initiation_OA_RR without having seen it in its entirety. He’d had some “miniscule glimpses” at a few stills and he also admits that he had “no idea where it was going to go”. To the uninitiated, this daredevil approach might seem unconventional. But when acquiring an artwork, Di Stasio relies on his instinct. I think it may also be a touch of chutzpah. But these are the traits that are crucial for collectors of art, and supporters of culture, to have. Artists need others to believe in them and to trust their visions. As Rennie says, “To have that support, that commitment, means that we can take the risks and make the kinds of work which we might not be able to make otherwise”. And the feeling is undeniably mutual, with Di Stasio adding, “We bounce things off each other, we talk, we’re family and it’s fantastic.”