It stretches from Williamstown to Fairfield. 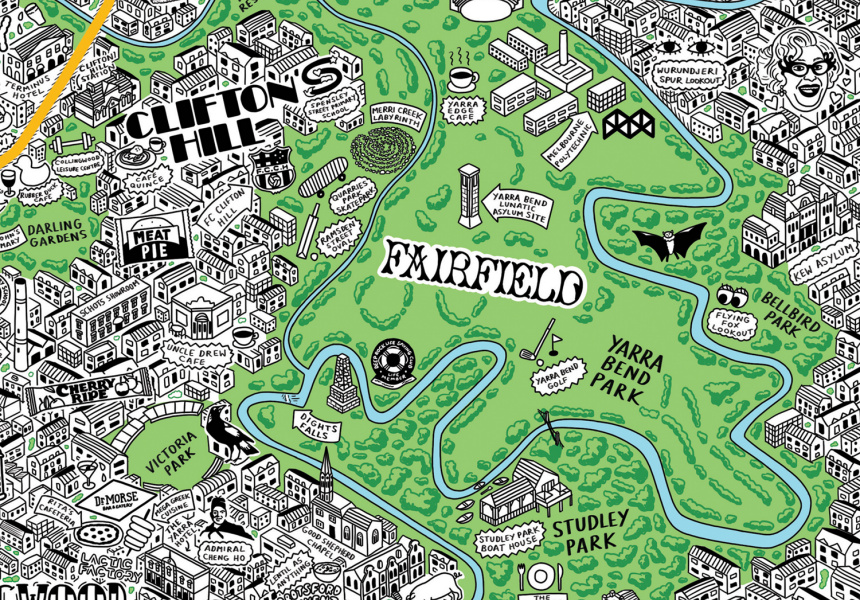 Jenni Sparks’s maps are a little different to the one in your parents glovebox. They’re bright, manic explosions that take liberties with exact coordinates. But they’re also full of the character of the cities they lay out, and are the product of more than 1000 hours of work.

Sparks’s illustration of Melbourne stretches from Williamstown and Port Phillip Bay, up north to Brunswick, with Footscray and Fairfield resting on its edges. Skyscrapers sit side-by-side with local food spots, cartoon characters, skateparks, stadiums and a giant jar of Vegemite.

“I’m not just trying to get the standard geographical info – I’m more interested in the vibe of a place and the in-jokes that you make when you live somewhere,” says Sparks, who has also created maps of Sydney, Paris, New York, Berlin and San Francisco.

The London native spent almost five months in Melbourne researching the map. Areas like Fitzroy and Collingwood fitted in with what she expected, but Sparks found surprises elsewhere.

“I was definitely surprised at how the CBD felt really modern and had so many new skyscrapers,” says Sparks. “Melbourne felt quite modern and futuristic compared to London, which has a lot of older buildings.”

Melburnians helped Sparks to pick out important locations to include. Bloggers, museums and tour guides all pitched in to help. “I really enjoyed it because once you get someone talking about where they live you can see how much they love the place.”

Sparks spoke to Broadsheet about some of her key takeaways from the city.

On the city’s aesthetic
“I was pretty taken aback by the variety of architectural styles. It felt like a mixture of so many different cultures. I was particularly appreciative of all the sign-writing styles on the windows of the stores – it reminded me of an old-school American aesthetic,” says Sparks.

“I wanted to make sure I illustrated the names of the different areas in the kind of sign-writing font that I saw everywhere.”

On Melbourne’s Indigenous history
“[It] was quite shocking to learn about the colonising of the area and its darker history, as well as the way that the people lived and their beliefs and traditions. I think it’s definitely a good thing that it is acknowledged as much as possible, but it doesn’t get away from how sad and complicated the history of the city is.”

On deciding what to put in and how to arrange it
“This bit of the process is probably the hardest, as I need to make sure things are geographically in the right place as much as possible, which poses a lot of design problems – especially in the CBD area where there’s a bunch of tall skyscrapers and a lot of cool restaurants and bars, so trying to fit everything in is very problematic.”

Working out how exactly to fit all of the city’s restaurants into a handy, accessible format is a challenge Broadsheet knows all too well.