Life as she knows it is about to change forever for Australian actress Elizabeth Debicki, who stars opposite Leonardo DiCaprio and Tobey Maguire in The Great Gatsby and will next appear alongside Cate Blanchett and Isabelle Huppert on the Sydney stage. 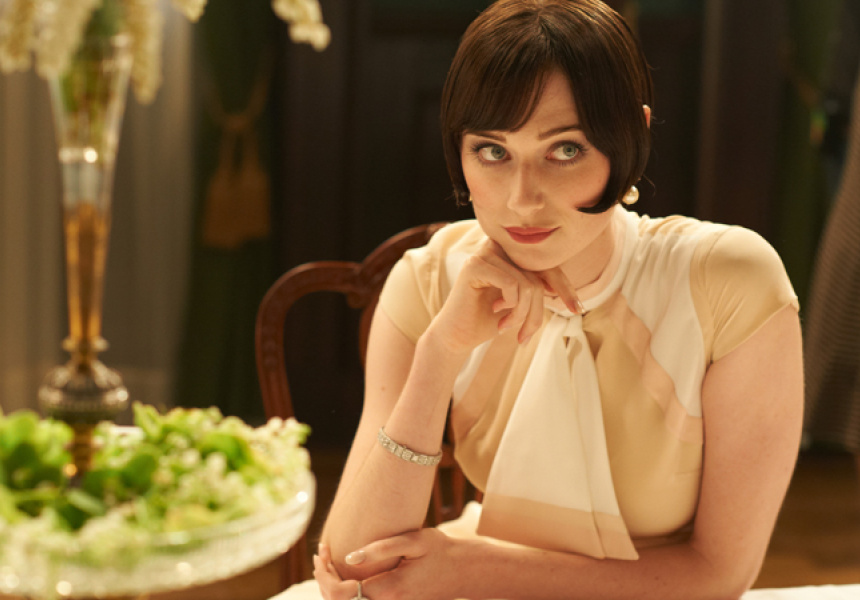 Elizabeth Debicki sounds weary and looks distracted, and not without good reason. Baz Luhrmann’s ‘discovery’ and a lead actress in his new $150 million film adaptation The Great Gatsby, Debicki has spent the past few weeks being wined and dined by Louis Vuitton, Prada and fronting the world’s press following the international premiere of The Great Gatsby at the Cannes Film Festival. The Gatsby caravan then rolled onto the US, Europe and parts of Southeast Asia before hitting Sydney, where it had a glittering premiere followed by a wild, decadent Gatsby-esque party. The evening before we meet, Debicki attended an exclusive soiree at Rockpool on George hosted by Vogue Australia and Tiffany & Co., whose sparkling baubles adorn the film’s female cast.

Mere hours later, Debicki is back in the Sydney Theatre Company’s rehearsal room being put through mental gymnastics as she works on The Maids, the dark, challenging play by surrealist French playwright Jean Genet, in which she stars alongside Cate Blanchett and French screen legend Isabelle Huppert.

Before now, the name Elizabeth Debicki was meaningless to many, and it was no different when Luhrmann invited her to audition. The recent Victorian College of the Arts graduate was performing in her first main-stage play – The Gift by local playwright Joanna Murray-Smith for the Melbourne Theatre Company – when she was called to Los Angeles to test for the part of Jordan Baker, the enigmatic socialite and pro-golfer with whom the film’s narrator Nick Carraway (Tobey Maguire) falls “halfway in love”.

Debicki duly landed the role, surprising many, including the film’s co-producer Doug Wick, who says in the film’s production notes: “We didn’t know her work, we didn’t know who she was… But then we went to a reading she was part of, and though she was relatively inexperienced, she brought a wit, a comedy and a presence. The fact that she was in the company of such extraordinary actors and she was comfortable was amazing.”

Since then, Debicki has gone on to receive superlative praise from the critics for her star turn in Gatsby, in addition to being featured in Vanity Fair, Vogue Australia, various other local media outlets and being cast as the face of boutique local jeweller Jan Logan. Debicki’s is a name we will get used to hearing.

But who is she? The 22-year-old, who was born in Paris to an Australian mother and Polish father, moved to Melbourne at the age of five with her parents, both dancers, and began to learn ballet herself. It soon became apparent she would grow too tall to dance professionally – she now stands at 180 centimetres – but her natural grace and athleticism have held her in good stead. Indeed, it was part of the reason Luhrmann cast her.

In person, Debicki is breathtakingly beautiful, even dressed down in faded, ripped jeans, a grey woollen sweater, minimal make-up and her long blonde hair hanging loose (she wears a cropped dark wig in Gatsby). She has Blanchett’s luminosity and she is regularly referred to as “the next Cate”. Performing in The Maids opposite Blanchett, one of Debicki’s role models, has been educative. Debicki was not required to audition for the role, but instead met with Blanchett and the play’s director and co-translators Benedict Andrews and STC artistic director Andrew Upton before being cast. Preparing herself for a rehearsal room with two of her most admired actors could have been intimidating.

“It was bizarre in the first few days of rehearsals. I think when you meet people you really admire you become really self-aware, you hope you will come off as the best version of yourself,” she says. “Which isn’t really helpful in rehearsal because you need to be able to drop everything and get into it. But that did happen.

“Cate and Isabelle are some of the hardest-working actors I’ve seen. From the second you step into the room you’re working; it’s a relentless commitment to being present and doing the work you’re there to do.”

Written in 1947, The Maids is a strange, dark tale of power, corruption, class envy and high fashion in which two maids and sisters Claire (Blanchett) and Solange (Huppert) fantasise about killing their madame (Debicki), with disastrous consequences.

“It’s a study of power: who has power, what is power, does it need to be given? For me it’s an obscure thing to be the mistress to Cate and Isabelle!” she says, going on to admit that she finds it difficult verbalising the playwright’s intent, hence her distraction and desire to return to the rehearsal room.

One final question before she disappears: is she often recognised? “You mean on the street?” she asks. “No, no, I honestly think I look so different. Even at the Sydney screening a lovely woman who’s been working on the film for a long time didn’t know who I was and said to me, ‘Why are you in this [cast] area?’ and I said, ‘I’m in the movie!’ I’d be very surprised if people recognise me.”

Let’s hope she enjoys her anonymity. It won’t last long.

The Maids runs at the Sydney Theatre from June 8 to July 20.

The Great Gatsby is screening nationally.