While they may have softened a little, Brian Jonestown Massacre are bringing their thorns back to Australia. Brian Jonestown Massacre are a very different kind of band. It’s certainly their sound, but maybe also their approach which harps back to a time when rock singers offended people and had drug addictions. No it’s not pretty, but it is one of the most pure psychedelic rock/punk mashups on the planet. That can’t be underestimated, even when writing about them means interviewing their notoriously prickly frontman, Anton Newcombe, over the phone from a Christmas party.

“I’m not trying to say anything,” he snaps down the line. “I’m playing lots of shows, I pay my bills, I’m my own boss and I don’t have to attend some Christmas party to do it – that’s not trying, that’s successfully making.” He’s missing the point (our Christmas party was awesome) but he’s also strangely right. Since the band first formed in San Francisco back in 1988, BJM have never appeared to try, and that’s half their charm. From the mountain of feedback that introduced their first album Spacegirl & Other Favorites, to their 2004 rockumentary Dig!, which saw an enraged Newcombe present the Dandy Warhols with shotgun cartridges inscribed with their names - BJM’s career has been successful simply because they don’t care. “I never cared about promoting, playing the game, any of that stuff and it’s never hurt me. Besides, if I told you about how great the game is, we’d just have a laugh because it’s really not.”

Of course, Newcombe is aware of his reputation. He described the aforementioned documentary as “at best a series of punch-ups and mishaps taken out of context,” and asserts several times that he’s often the victim of sensationalism. Indeed, Newcombe now lives in Berlin with his wife and son, where he’s given up drugs and even drinking in order to live a more mindful life. “You know, I’m even thinking more about how the band relate. Like there’s one guy who’s sort of a dick when he’s stoned, and there’s another who we always have to wait for, but it’s a family and we just have work to get what we need out of it.”

Certainly his candour seems to undermine his arrogant reputation. He happily explains that the upcoming Australian tour is a result of Meredith Music Festival. “They invited us and that paid for the tickets so we could get over there.” Newcombe adds that although he likes Australia, he sometimes feels a bit unsafe “Like Kings Cross on the weekend. That place is fucking dangerous. And actually I feel a bit unsafe in a lot of cities, much more than in Berlin.”

Anton sings in silky refrain, over quietly menacing guitar in a similar school of psychedelia to Queens of the Stone Age, with an older, more Bay Area feel. They can be sweet and gentle but then so suddenly they’re just downright discordant. This contrast fits an artist who begins a conversation with snarls and ends with polite insights into the band’s finances. To top it all off, Anton described what newcomers can expect from their show. “I don’t care what they think. They should know us because we’re good.”

Brian Jonestown Massacre will play at The Palace Theatre in Melbourne on December 20. 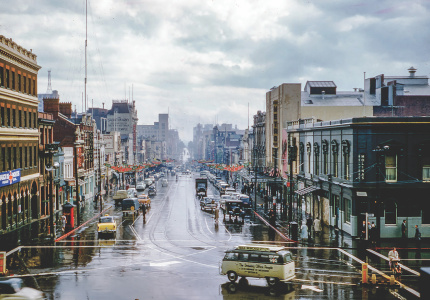