Paul Nicklen: Life at the End of the World

We sit down with National Geographic photojournalist and conservationist Paul Nicklen to hear about life on assignment in the most remote parts of the planet. 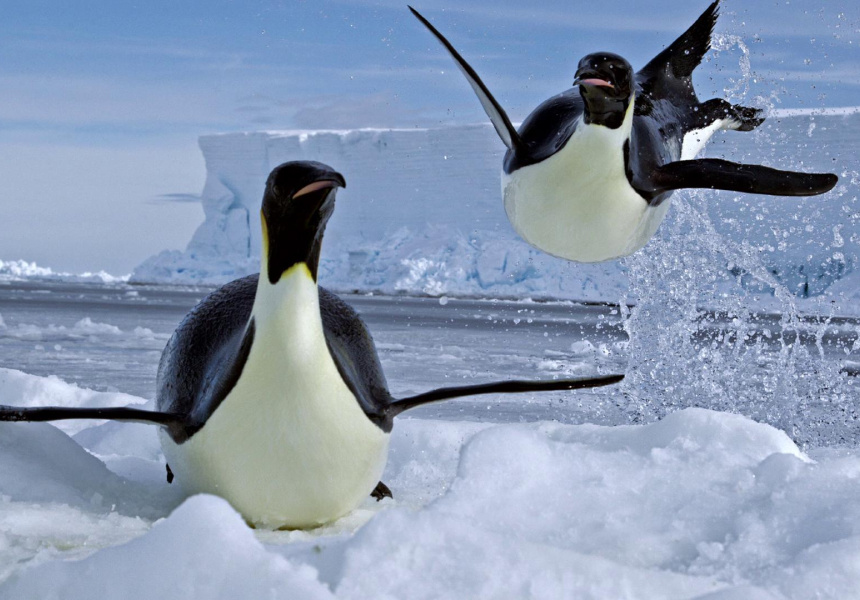 Paul Nicklen has lived so hard that he’s narrowly escaped death more times than he can count on one hand. The 45 year-old biologist, nature photojournalist and conservationist has plenty to show for it though – 13 of his stories have appeared in National Geographic, including a cover, and he’s claimed more than 20 major international awards for his work. Beyond making pretty images, Nicklen has dedicated a life and career to documenting our changing planet and sharing them in an engaging and thought-provoking way.

While he can relax amongst polar bears and sea lions, Nicklen isn’t so at ease in cities or crowds. It’s one of the reasons we’re sitting in the closed bar of his Collins Street hotel – a small pocket of quiet. He’s in town for talk at Fairfax Studio this Sunday as part of the National Geographic Live series, sharing a presentation he’s been travelling the world with. While people surely come for the nail-biting adventures and tales of near-death – and there are plenty of those – Nicklen is hoping to convey a range environmental issues even more dangerous and concerning.

“The work I’ve been doing for the last 15 years through National Geographic and my own work has been trying to show the interconnectedness between species and sea ice,” he explains. “If we lose ice, we lose an entire ecosystem.”

Growing up in a tiny community of 200 Inuit people in Northern Baffin Island in Canada, up near Greenland, a life without television, computer or radio left the young boy with nothing but his friends and a vast playground of ice. As neighbouring beluga whales swam by, he and his friends would go camping, hunting and compete to see how many pieces of sea ice they could run across until falling into the ocean.

“I remember that as a kid, my favourite thing was to hike up above the community when it was dark at night with the aurora borealis and just sit there for hours until I was so frozen I couldn’t take it anymore.”

Living amongst the Inuit, Nicklen learnt patience, a trait that he feels is absent from our modern lifestyles. “To be able to hunt, to be able to wait for a seal or caribou…when things aren’t happening, they don’t force it,” he says. “So that’s been crucial in my photography and story telling, to learn to be patient and not force things.”

Perseverance in the face of disappointment has made Nicklen who he is, and his images as powerful as they are. Flicking through the pages of a nature magazine, just how those images came to be is hard to fully comprehend.

National Geographic ran 15 images, including the cover, of Nicklen’s stunning 2011 photo essay on the elusive Spirit Bears. While actually tracking the bears, Nicklen sat by the river for two months before he even glimpsed one. Like any paid photographer working to a deadline, especially for a publication with as much esteem and reach as the National Geographic, the pressure is tremendous.

“When you’re working on these things, the fear of failure is huge,” Nicklen says. “It’s terrifying…two months of waiting and nothing’s happening.”

Those final Spirit Bear images came from a couple of days out of three months of trying. Another story, on narhwals, he shot in three or four hours, after 10 years of trying.

“With the work I do, I fail 98 per cent of the time. Every day that I get up with my camera and I get excited – ‘Today I’m going to get that spirit bear on the river’ – nothing happens. You fail that day, and you fail and you fail. And it finally does happen, but you screw up… Then I’ll send my pictures to my editors, and they’ll be like ‘no’. But I’ve never failed a story entirely, because I’m a persistent bugger.”

Having overcome hardships like hypothermia, near-drownings, ravaging loneliness and disappointment, the biggest obstacle Nicklen is facing now is making a meaningful connection with his own species. After 20 years of shooting in the polar regions, Nicklen has been a direct eye witness to the imminent effects of climate change, and he’s telling it to us as simply as he can.

“The ice changes in the last 20 years are huge,” he says. “So many places are sick. The Barrier Reef is sick. Everywhere I go, it’s like ‘You should have been here 10 years ago’ because it’s all changing.”

Nicklen reached the tipping point in his career in 2007, when he ignored his journalistic instincts and published an emotional plea in the National Geographic for readers to realise the danger of the vanishing sea ice. The striking photo essay received the highest readership score in the past 14 years of the magazine, and something clicked in his approach.

“I’d found a formula of communicating that people were ready for,” Nicklen says. Knowing that taking his environmental message to the public would cost his journalistic credibility, he made a decision. “Fuck it. Time’s ticking, and I gotta do this now.”

Shooting in the Arctic and Antarctic since 1994, Nicklen has seen the sea ice vanish before his own eyes – and captured it on camera.

Fourteen years ago, on a trip to the Northwest Passage, he and his team were smashing heavy ice with big ice breakers. Now people can travel through, at the same time of year, in little fibreglass sailboats “without scratching their hull”.

Even just a few years ago, Nicklen was on an assignment in Svalbard, Norway. When they got there, they realised they couldn’t complete their project, as there was no ice.

“Can you imagine? We’re only 900 kilometres from the North Pole…and we can’t do our shoot because there’s no ice. And this is in winter.” He can’t understand why climate change is still up for debate.

Nicklen is trying to convey to people – and to make common knowledge – the critical connection between life and sea ice. “Ice is like a soil in a garden. Things can’t grow without ice,” Nicklen explains, a phrase he must have uttered hundred of times now. “People don’t understand that.

“We’re going to lose half the species on this planet in the next 50 to 80 years, and probably polar bears will be in there,” he stresses. “And I can’t stop. I wish I didn’t care because it’s exhausting to care. It’s frustrating, and it makes me angry.”

“If we can’t save half the species on the planet, including the most sexy, charismatic, beautiful megafauna in the form of whales and polar bears and lions and tigers, can we save ourselves? I don’t think so. I think at this point we’ve gone too far.”

His job isn’t about inspiring fear or guilt, but stirring up a sense of respect, mutual responsibility and, mostly, awe. “Nature’s unbelievable,” Nicklen says. “It’s very resilient, if you just protect it.”

Paul Nicklen will be appearing at Into the Icy Realms: On Assignment with Paul Nicklen on Sunday July 28 at 3pm and 6pm at Fairfax Studio, Art Centre Melbourne. Tickets are available here.