Ron Galella in Smash His Camera

The godfather of paparazzi and subject of doco Smash His Camera, Ron Galella talks to Broadsheet about a life spent shooting celebrities. 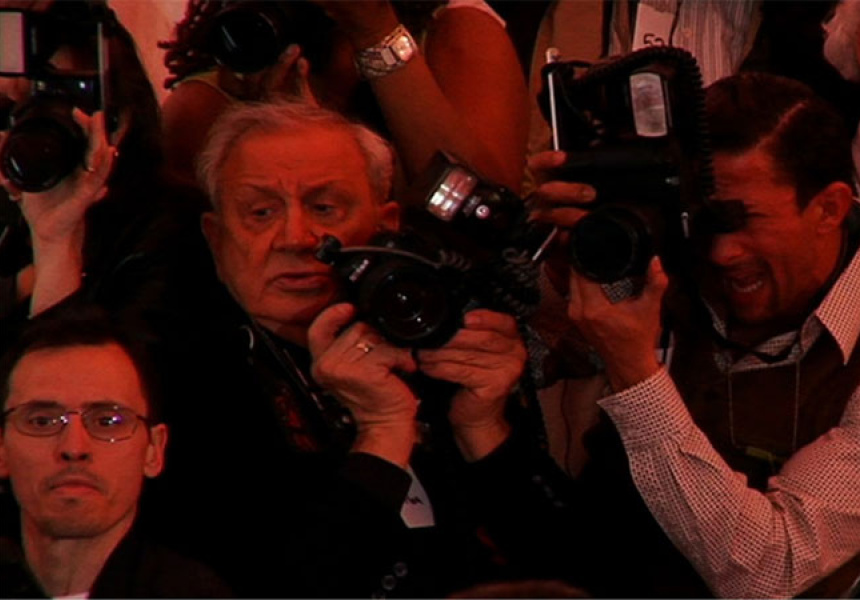 For more than 40 years, paparazzo extraordinaire Ron Galella’s photos have filled the pages of the world’s biggest magazines. Often reviled (the court case and restraining order brought against him by Jackie Kennedy Onassis made him infamous while Marlon Brando once broke his jaw), he is the subject of a documentary, Smash His Camera, that’s about to open at ACMI this week.

“People think paparazzi is a kind of dirty word,” says Galella. “But I believe I made it an art.” His focus on celebrities stemmed both from financial necessity and genuine curiosity. “Selling the pictures is one factor,” he admits. “But it’s mainly interest. We all want to know what these celebrities look like in real life. Even when I was going to college I’d crash premieres like Guys and Dolls and get pictures of Sinatra, William Holden. It was great. To see these stars in person was a big thrill. And that’s what I’m looking for. The glamour. The stars that I shot years ago – they earned their celebrity. And they weren’t exposed as much. But today it’s the opposite. You have Lindsay Lohan and Paris Hilton and Britney and they’re all overexposed. Night and day they’re bombarded with the paparazzi.”

Oddly, however, Galella denies he’s contributed to current celebrity media crush. “I don’t think so,” he says. “My work is more… [laughs] I hate to brag, but I think my work is more artistic and more … greater [sic]. Photographers today, they just do it for the money. They rely on luck to take great shots.”

Galella also seems wilfully oblivious to the distress he caused many of his subjects. “Jackie said that [I frightened her] in court, but it’s not true,” he says. “Her lawyer said I jumped out of the bushes, I jumped out of the coat rack. That’s not true! I jump INTO the coat rack and behind the trees! I want to get the off-guard picture. I don’t want them to see me, you see. And to prove their case, when Jackie had the big trial, she was trying to prove invasion of privacy and harassment. And jumping out, frightening her is harassment, you see. But that’s not true. I don’t think I ever frightened her really.”

One suspects that this disingenuous defence belies more of an understanding of the hostility towards his work than he would like to admit. Indeed, pressed on the subject, he reluctantly admits to feeling “a little guilty”, particularly in regards to Jackie Kennedy.

Galella’s days of controversy are, however, largely behind him. These days he doesn’t take very many pictures (“mainly just to renew my press card in New York,” he says), instead spending most of his time putting together books from the literally millions of photos filling his archives. Of being the subject of a film himself in Smash His Camera, Galella says little other than “it’s great to see me when I was young and handsome. Now I’m eighty years old. It’s the magic of photography that it records forever the way we were.”

We have five double passes to the Sunday screening at 5.30pm. To win one email win@broadsheet.com.au with Smash His Camera as the subject.