For four nights, the Yarra will turn into a powerful laser show. 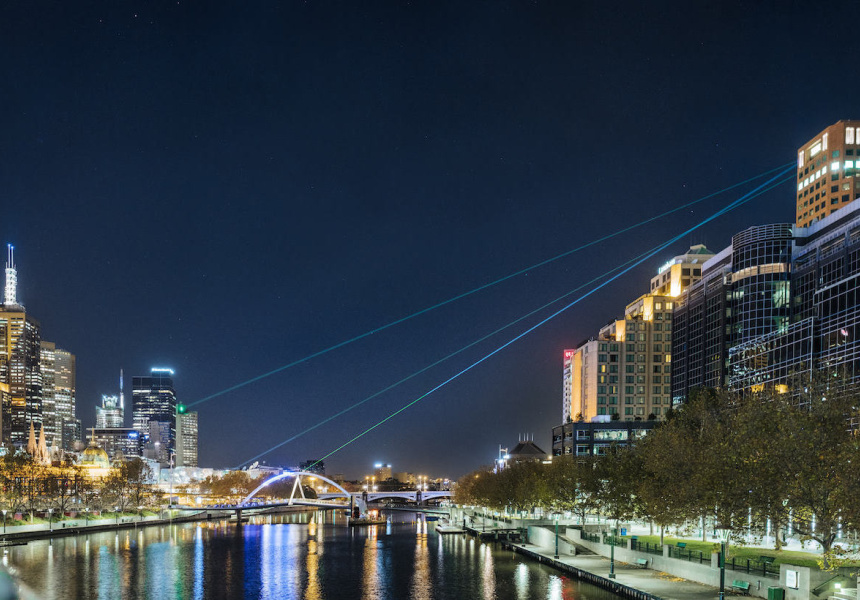 Each year, Melbourne Fringe Festival gives you a reason to step out of your artistic rut and see performances you wouldn’t see elsewhere. This 34th year of the festival sticks to its long-held spirit of unadulterated discovery.

As well as being provoked, come prepared to be entertained, and to discover new genres you never knew existed. With more than 6000 artists, this year’s program is a trove of diversity, and includes acts that will make you laugh, cry, think and grow – sometimes all at once.

To help you avoid that most-chronic Melbourne affliction – too much choice – we’ve made a concise list of Fringe Festival acts to help you step out of your comfort zone with confidence.

Sky Light – Robin Fox
Over four nights, buildings along the Yarra River will be connected by powerful laser beams and immersed in an original electronic composition that follows you as you walk along the banks. Come sundown you are invited to choose your own path along the river, and to notice as you walk how the overhead lights shift, fade and reappear as your own perspective changes.

Restrung – Casus Co-Founders by Helen Clark
Casus is an ensemble quickly becoming known for the beauty of its contemporary circus pieces. In a re-working of its much-awarded show Knee Deep, Restrung will see musician Helen Clark join the acrobats live on stage for an intimate and multi-sensory performance that will have you pondering the fragility of life while marvelling at the strength of the human body.

Cosmonaut – Ryan Good, produced by Lucy Tafler Presents
In one of those instances of “I’m glad they did it so I don’t have to”, Ryan Good – the award-winning creator of Sex With Animals – went through 50-years’ worth of Cosmopolitan magazines in a quest to find the worst sex tips of all time. The end result is a show that’s premise is as simple as it is funny: to share them with us.

Onstage Dating – Bron Batten and Gary Abrahams
Bron Batten has agreed to go on a series of first dates in front of a live audience. For each night of this performance, Batten will test her chemistry with a volunteer from the audience in a humorous and potentially cringe-worthy piece of improvised theatre that lends new meaning to audience participation.

The Awkward Years – isthisyours? by Dan Koerner, Insite Arts
The Awkward Years is a celebration of puberty enjoyed from the safe distance of a (hopefully) less-awkward adulthood. For the duration of this 20-minute party, you'll be guided through the tumult of your past, with a nostalgic playlist that will have you digging up old memories and even older dance moves.

Chairman of the Beard – Adam Page
Adam Page’s beard has won more awards than most other people’s body parts combined. Proving that a one-man band can be more than an anachronism with an accordion, Adam Page’s improvised performances have been known to include everything from jazz to Punjabi music, and work every time thanks to equal parts charisma, humour and talent.

Get Yer Dag On – Damian Cowell’s Disco Machine
In the past Damian Cowell – the former frontman of TISM – has collaborated with Shaun Micallef, Kate Miller-Heidke, John Safran and Tony Martin for his brand of satirical comedy disco. Tim Rogers says: “If anyone's ‘gonna make fun of me, better it be Damian rather than someone who writes bad songs.” There are four nights only to get around this ultra-loose party at Fringe.

Kids vs. Art
Each week over the three weeks of Fringe, a new Kids vs. Art podcast will be released as part of the festival program. On the podcast kids will let loose their sometimes insightful, often funny, and always brutally honest opinions on contemporary art and performance. Artists, beware.

Festival Club
From 6pm daily, the Festival Club – located in North Melbourne’s Arts House – is where you can mingle with fellow festival-goers and share a drink and a dance after each day’s programming. But more than just the social heart of the festival, the club will host its own diverse line-up of free performances every night (except Monday). Quirky events include On The Mark (a comedic take on football commentary); Church (a queer church service); and YUMMY Up Late (a cabaret that combines dance, circus and music). The Festival Club is its own late-night microcosm of the Fringe Festival program.

Melbourne Fringe Festival will run from September 15 to October 2 at various locations around Melbourne. Ticketing and program information can be found at melbournefringe.com.au.