One Hundred Giant Skulls, and A Spanish Prince

Ron Mueck’s new sculpture, Mass, is a grinning, gruesome room-sized pile of skulls inside the NGV. 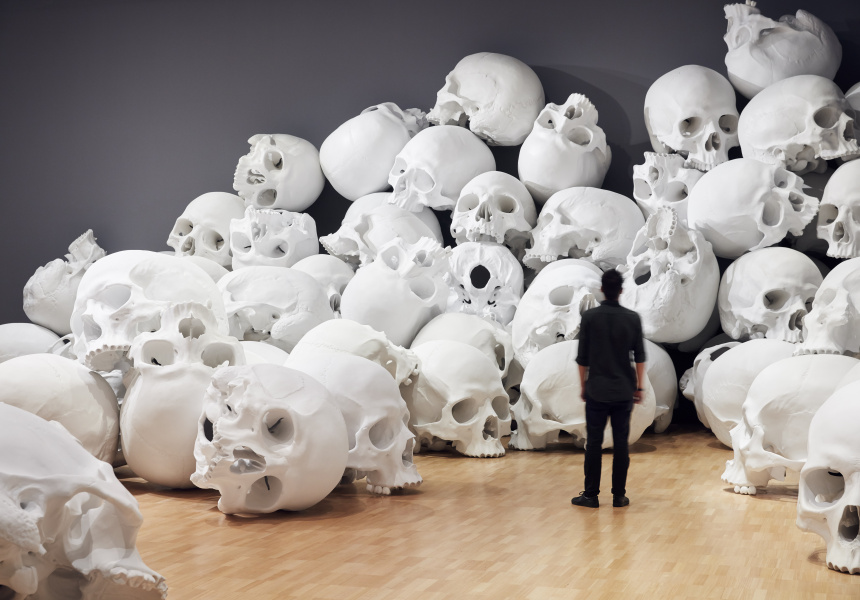 On the second floor of the National Gallery of Victoria, among 18th and 19th century paintings, there’s a huge, jawless skull. The sculpture is an invasion, without context, of one of the most conservative wings of the gallery, and it’s a little unsettling. Then to your left, two rooms away, there are 99 more.

Seeing the skulls through the doorway is a disconcerting experience – as if you’re peering into a microscope. Inside the room, it’s even odder. The 99 off-white sculptures are piled up haphazardly, like a macabre ball pit. Each is about one-metre-square. Some are cracked. Some have broken teeth. Gaping eye sockets somehow glare at you.

A few paintings have been shuffled around to accommodate the huge installation, so the skulls share the space with neoclassical portraits of a Spanish Prince, and a castrato and his friends. It’s as if skulls have multiplied here – like cell division – and NGV has done its best to sweep them to the back of the room, as if its something they’ll come back and get later.

There was Dead Dad, a metre-long sculpture of a deceased old man, tiny, ineffectual and naked. It was that piece, twenty years ago, which established Mueck as one of the trendy set of Young British Artists, alongside Damien Hirst and Tracey Emin. Later came A Girl, a five-metre-long giant newborn baby; the eerie Two Women; and his Mask series of giant disembodied faces. All play with scale, but Mass is his largest yet.

I can’t tell you what this piece is ‘about’ in any straightforward sense, because Mueck himself won’t be drawn on it. In fact, he won’t speak to me at all.

“He doesn’t do interviews,” says David Hurlston, the NGV curator who worked closely with Mueck on the commission. “He prefers people to respond to his work in their own ways.”

He almost did an interview with the Age in 2010, but it never happened.

“He doesn’t want it to be about himself,” Hurlston says.

Here among the neoclassical paintings, Mueck’s skulls sit brazenly. They recall the skull-lined catacombs of Paris. The gallery’s catalogue essay says the work refers to Cambodian, Jewish and Australian Aboriginal genocides. But that’s just one reading. Not everyone will distinguish that brutal underlying imagery.

“The skull is an eternal symbol of humanity,” says Hurlston.

They’re held aloft by actors in Hamlet proclaiming, "Alas, poor Yorick! I knew him, Horatio, a fellow of infinite jest..." They’re the inspiration for costumes on the Mexican Day of the Dead. They’re emblazoned on children’s pirate-themed pajamas. And Nazi SS uniforms.

“It can be gruesome and sombre, or it can be grinning and witty,” says Hurlston. “He didn’t set out to make something sombre and bleak.”

Up close – you can meander through the maze of bones – they lose their form. They simply become a sculptural form, with the universally human texture and curvature of our own skeletons. En masse, near or far, it’s an image that holds incredible power.