With more than 30 resident organisations and artists, find a record store, a ceramics studio, a design bookstore, contemporary art galleries, The Social Studio’s new home and more. There’s also a leafy courtyard for events, and an all-day diner and rooftop bar (with Colour nightclub DNA) are still to come. 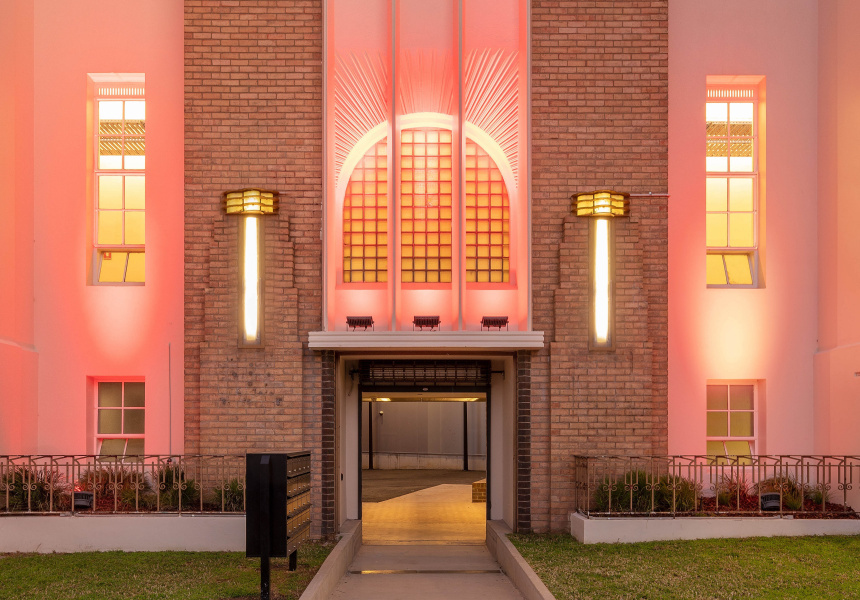 With its striking art-deco entrance, towering red-brick facade and courtyard full of leafy, longstanding trees, the more than 6500-square-metre site between Collingwood’s Johnston, Perry and Wellington streets feels like it’s been around forever. And in a way it has – over the past 140 years it’s been a courthouse, council chambers, a design institute and the Collingwood Technical School.

But its restoration, new paint job (with patches of bright pink and blue stripes) and buzz of activity signals the arrival of something new. Arts precinct and community hub Collingwood Yards is now open to the public, after years hidden behind construction hoarding. And it’s here for the long haul.

“Immediately upon going for a walk around the buildings, which were in a pretty bad state of disrepair, I saw the possibility and promise to create an extraordinary community of arts organisations and artists,” founding chair Daniel Besen tells Broadsheet.

The three-building, multi-level project has been more than half a decade in the making, but the vision – to create a community where creativity can flourish, and where collaboration is encouraged – hasn’t wavered.

Already, Collingwood Yards is home to more than 30 resident organisations and artists, from publishers and radio stations to fashion retailers, gallery spaces and solo studios. (As well as an iconic Keith Haring mural on its outside wall.)

On the ground floor, a handful of tenants are open to the public: Licorice Pie’s new second-hand-focused record store, local ceramicist Tantri Mustika’s studio and retail space, an architecture and design bookstore by boutique publisher Uro, and social enterprise and clothing store The Social Studio. And an all-day diner by Hope St Radio has opened by Jack Shaw (Cooked With Jack) is open, with Israeli-Australian chef Ellie Bouhadana (Ellie’s Table) at the helm.

Coming soon is a new cafe and retail store for Padre Coffee. The team behind the multidisciplinary Stay Soft Studios (which includes Liam Alexander and Benny Rausa from Carlton nightclub Colour) is opening a rooftop bar with views to the north, and Collingwood Yards is still looking to fill its subterranean space (hopefully with a bar and live-music venue).

Up on the first floor find galleries by the contemporary-art-centred West Space and the artist-run Bus Projects, while the top level is filled with offices and private artist studios. Other tenants include Agency, a not-for-profit promoting Indigenous arts and culture; the Birrarangga Film Festival; Arts Project Australia, a social enterprise supporting artists with intellectual disabilities; Bad Apples, the record label founded by Indigenous rapper Briggs; and youth music organisation The Push.

In the future, the courtyard will be used to host art and design markets, live gigs, light shows from the Centre for Projection Art, and other community events.

“All of the artists and artisans bringing together their different communities, and the collective ripple effect, bring me such joy about all the possibilities that will emerge once all the organisations are really thriving,” Besen says.

The state government gifted the massive buildings to Contemporary Arts Precinct Ltd, which manages Collingwood Yards, and philanthropic and corporate partners helped fund the site’s refurbishment. The result is affordable rent and spaces for the artists and organisations – not just at opening, but for years to come.

“We saw arts organisations being forced out of the inner north, and our ambition was to provide spaces that are significantly subsidised,” Besen says. “This presents a wonderful opportunity of creating affordable spaces and security of tenure for artists and organisations, which was much needed for the community and the vibrancy of Collingwood, and also frankly of Melbourne.”

This article was updated on May 20.