Now and Then: Gunter Christmann at Heide

The first retrospective of the Berlin-born artist Gunter Christmann at Heide is a powerful and diverse show that finally pays homage to one of Australia’s best modern painters. 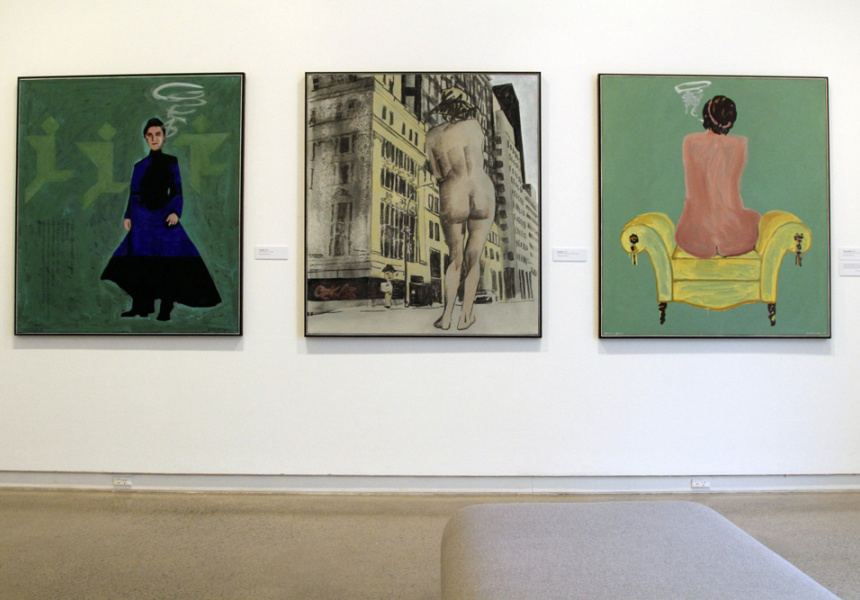 “Those who care to look have been rewarded with some of the most beautiful paintings of our time,” said John McPhee, a historian and former curator of Australian Decorative Arts at the National Gallery of Australia, in a Christies catalogue in 2006.

McPhee is referring to the work of the late Gunter Christmann, an artist who is not a household name in Australia, but probably should be. His evocative and arresting work is held in the National Gallery of Australia and every state gallery in the country. He was born and grew up in Berlin but, until his death last year, he spent most of his life in Darlinghurst in Sydney. He represented both cities on canvas often.

Now and Then at the Heide Museum of Modern Art is the first exhibition to survey Christmann’s impressive five-decade career. It spans his early, colourful abstractions, his innovative “sprankle paintings” as well as the more figurative canvases of his late career.

Christmann moved to Australia in 1959. He worked as a bricklayer to pay for art materials and eventually, with encouragement from his wife Jenny, he quit construction to paint full time in the late 1960s. He was featured in a major exhibition on colour-field painting at the NGV in 1968 and went on to participate in a number of biennales and international exhibitions. Some of his work is now part of the permanent collections of several overseas institutions including the Berlinische Gallerie in Berlin and the British Museum in London, among others. But he consistently eschewed the hype that surrounded his work.

“Gunter was not a great self-promoter, he disliked the political machinations of the art world and always painted for himself rather than the market,” says Lesley Harding, the curator of the Heide show.

Christmann was largely self-taught and did not belong to any formal school or collective. He was a technically precise painter whose gift and instinct for using and exploring colour is obvious from the moment you step into the Heide show. In one of the museum’s largest galleries, bold planes of bright pink and green and blue and yellow hang in one corner, while Christmann’s “sprankle” paintings cover the rest of the walls.

The works of the European geometric abstractionists, including Piet Mondrian, were some of Christmann’s earliest inspirations. His 1960s canvases – flat paint, structural forms and contrasting colours – share qualities with the Russian constructivists.

“Square or amorphous. Straight or not, it’s all figurative,” Christmann has said of his work. “No matter what anyone calls it I never, NEVER painted abstract.”

Christmann coined the term “sprankle” to describe his technique of covering a canvas with infinitesimal spots of paint, a style that dominated his output from 1969 until the mid 1970s. The works have the appearance of having been spray-painted and remain incredibly contemporary-looking, resembling grainy, digital pixilation. Pink smoke stone, on show at Heide, is reminiscent of fuzzy static on a TV screen, albeit much more beautiful.

To get this effect, Christmann mixed his paint to a consistency between milk and cream and with the canvas on the floor, “Flicked the brush in the air and then the paint fell on just like rain,” producing a shimmer effect, he said in a 1979 interview.

In the late 1970s and after, Christmann’s paintings became increasingly figurative, as the finely hewn Heide retrospective shows. His work reflected ties to his native Germany, his wife Jenny and the detritus of the ground underfoot; sand, leaves, rubbish. He also began to paint reductive self-portraits.

“While stylistically he moves around, thematically and intellectually there is a continuous thread, where nature and chance are key,” Harding says. But she adds that although Christmann maintained certain techniques throughout his career, he was on a, “seemingly inexhaustible quest for new ideas.”

“He didn’t labour anything and was always moving forward – this is a rarity – many mature artists revisit past successes, or settle into a comfortable mode in their painting,” Harding says. “Gunter never stood still.”

Gunter Christmann: Now and Then shows at the Heide Museum of Modern Art through November 16.