A Nod to Ned 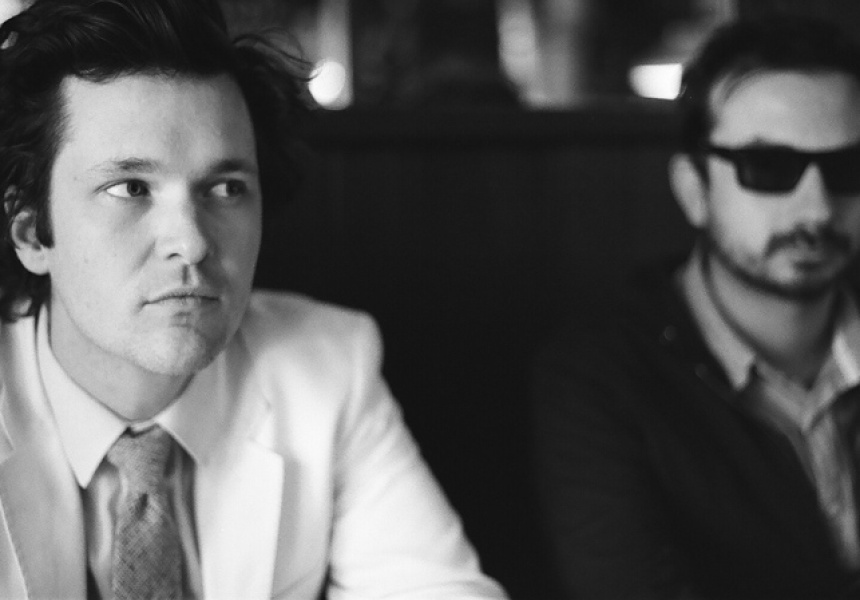 “I’ve become someone who needs time and space to create music and can’t become distracted when recording,” explains Collette. “Whether it be in a new country or in Australia over at Joe’s barn/studio [in country Victoria] it becomes your whole day-to-day existence.”

Recorded in Berlin and Melbourne, Collette’s aptly titled record 2 derives its title from both the length of the Berlin sojourn and the fact that it is the second Wirewalker collaboration. Four albums into his career, the LP finds the man tapping into fluctuating Spanish guitar and includes a range of universal guests who add spectral backing vocals.

The UK’s Gemma Ray, German stage actors Mirjam Smejkal and Sascha Gersak, and Australia’s own Laura Jean and Biddy Connor all assist in helping to craft the Collette and Talia vision – one that brings to mind a synthesis of the equally as inventive oeuvres of Devastations and Depeche Mode.

“Yeah, some of my tracks have had that vocal sense of Depeche Mode’s Dave Gahan, or even, someone once said Simon Le Bon!” muses Collette. “I don’t know, I mean I grew up as a kid in the 80s and had older siblings, so maybe this has filtered through? I also still really like George Michael and think Faith is a fantastic record so it all rubs off I guess,” he adds.

Demonstrating that song concepts can be constructed from virtually anywhere, the opening track from 2 is a number entitled Il Futuro Fantastico and was inspired by a Mediterranean beat that used to emanate from restaurants and car stereos when Collette lived on Sydney Road (in Melbourne) a few years back. The same beat has since travelled with the performer all the way to the streets of Berlin.

“I used to hear it all the time from the Turkish population on Sydney Road there, and Berlin is also full of Turkish people and you still hear that beat!” he laughs.

Collette informs us that like many of he and Talia’s embryonic ideas, both men shared the initial view that the song was “silly” before appreciating that they actually had something quite interesting to work with. “Much of our stuff, at the early stage, might be too cheesy and ridiculous and then you realise that it’s kind of like stage acting or something where you have to make the gestures a bit bigger, then dynamics kick in and a really corny idea turns around,” he declares.

Collette also admits that the imaginative pair has finally found that balance between his own songwriting edge and the experimental noises that Talia brings to the table. Indeed, it seems as though all the collaborative stars have finally aligned on this latest effort. “Sometimes, when you put songs over really abstract backgrounds, they don’t engage me [lyrically] that much and I can just hear the background on its own, but with this album it was a real trial and error process which really appeals to both of us,” explains Collette.

Having always had a proclivity for playing nylon string guitar, Collette states that the way he approached his use of the Spanish guitar on 2 also transformed the feel of the album. “It was probably a little more aggressive [the playing], moving away from a folky thing to more a driving sound that was definitely influenced by listening to a lot of Brazilian stuff from the 1960s and 70s like Jorge Ben [Jor],” he says.

And it seems the samba-funk narratives of Ben Jor have also leaked into the way both the players went about constructing the overall electro-acoustic composition of 2. There are drum machines and tape manipulations at play, an atmospheric awareness and also the Brazilian artist’s taste for laying down a delicate platform and having it detonate in the chorus.

“I wouldn’t say it’s a rip-off,” says Collette. “But this style couldn’t fail to come through because we just got really obsessed with those records a couple of years ago.”