Japanese Modernism captures the explosion of art and celebration of youth in an era sandwiched between two tragedies. It’s full of vibrant graphic works, homewares and clothing – including some risqué (for the time) undergarments. 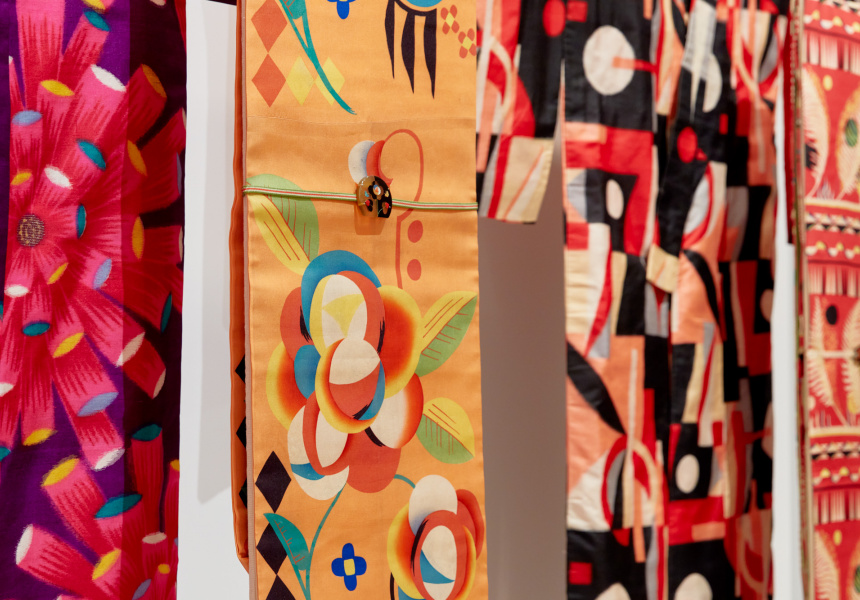 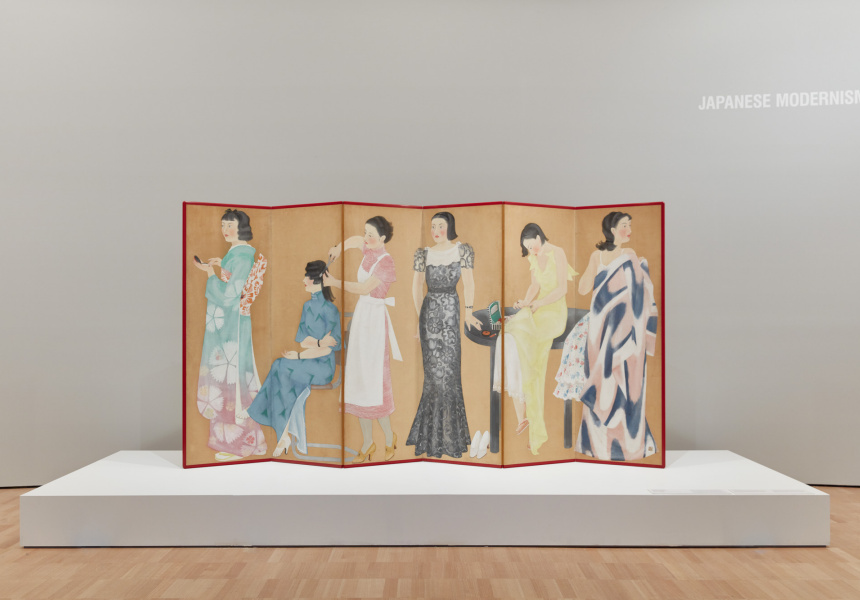 Installation view of Tanaguchi Fumie’s Preparing to go out, 1935 inside Japanese Modernism at National Gallery of Victoria, Melbourne from February 28 to October 5, 2020. Photo: Tom Ross I’m at the NGV and one wall is taken up entirely by delicate drinking glasses, each one distinct in shape and colour. In the 1920s and ’30s, Japan was one of the world’s biggest producers of cut glass, and these examples are a glimpse into that once-booming industry.

NGV’s Japanese Modernism exhibition, four years in the making, shines a light on this vibrant and dynamic time in Japan’s history, looking at the intricacies of everyday life; how people dressed (including some rather illuminating – and risqué for the time – men’s undergarments); and their daily lives.

In 1923, the Kanto earthquake devastated Tokyo. But what followed was an explosion of modern art, female independence, consumer culture and celebration of youth, before the door slammed shut in 1939 with the start of World War II.

“[The exhibition covers] this 20-year period where Tokyo came out of the ashes of destruction [from the earthquake] into one of the most burgeoning contemporary modernist metropolises,” says Wayne Crothers, one of the exhibition’s co-curators.

None of the 190 pieces here have been displayed in Australia before. There are sections dedicated to travel, publishing and fashion. Clothing and accessories are given equal weight to paintings and prints. A display of art nouveau and art deco-inspired portable make-up canisters takes just as much pride of place as a bold, colourful lithograph by graphic artist Hisui Sugiura, The first subway in the East (1927).

Women have a powerful presence here – both as artists and subjects. A collection of kimonos made from brightly coloured fabric with geometric designs were, at the time, considered a wildly modern spin on a traditional garment. Waiting for makeup (1938) by Negishi Ayako depicts a simple but intimate moment frozen in time: one woman kneels – possibly at a mirror just outside of the frame – as she fixes her hair, while the other gazes into the middle-distance as she waits her turn, shoulders relaxed, a handbag carelessly discarded next to them. The work was completed when the artist was 25 years old.

Taniguchi Fumie’s Preparing to go out (Yosoou hitobito) (1935) is a multi-panel screen showing six women as they get ready to leave the house wearing a mix of traditional Japanese and Western-inspired clothing. One woman is curling another’s hair. One puts on make-up. Another is absorbed in mending a hem.

All six women – in fact most of the women depicted in this exhibition – have short bob haircuts. It doesn’t seem like much now, but at the time this was avant-garde, the sign of a moga, or modern woman.

In this work, Fumie contrasts and subverts the art of 17th-century Matsuura screens, which also traditionally depicted women engaged in leisure, to allude to the changing attitudes towards women.

“[Matsuura screens have] 17th-century women on them,” says co-curator Annika Aitken. “The women [here] are sporting bobbed haircuts, they have quite assertive attitudes … you can see they’re quite confident.”

Fumie was a talented artist on the rise, but when World War II began she fled Tokyo to escape the allied bombing. In the 1950s she emigrated to Los Angeles, but never painted again.

Like the exhibition at large, Preparing to go out captures a nostalgia for a lost era sandwiched between tragedies. World War II also marked the end of the cut-glass industry. “During the bombing of the war, all of these workshops were destroyed,” says Crothers. “And of course the austere measures that followed never allowed this industry to get back on its feet again.”

On their own merits, the individual items making up the exhibition are enough to hold your attention, to make you think. But as a collection Japanese Modernism forms a time capsule, shining a light on quiet, unsung daily histories.

Japanese Modernism is on now at the NGV until October 4. Entry is free.