The NGV has gone all out this winter to produce the most extensive exhibition of Viennese Secession artworks ever shown in the Southern Hemisphere. 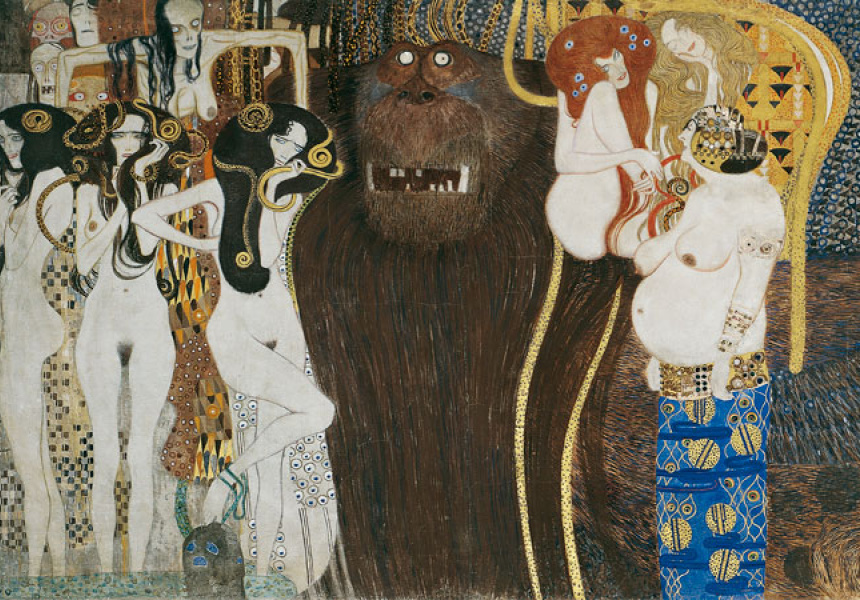 Even the most seasoned art lover will gush at this year’s Viennese Winter Masterpieces collection at NGV. The exhibition brings together an exceptional collection of works by Viennese Secession artists and designers such as Gustav Klimt, Josef Hoffman, Otto Wagner, Egon Schiele, Adolf Loos and Carl Moll.

The NGV has gathered works from New York, UK and Switzerland, along with those from Vienna’s famous Belvedere and Wien museums.

A highlight of the exhibition is the pair of Klimt works, Fritza Riedler and Emilie Flöge, travelling together for the first time. Director of Vienna’s Belvedere Dr Agnes Husslein-Arco says the Fritza Riedler is Klimt’s most important portrait.

“All the rich ladies wanted to have portraits of themselves by Kilmt,” says Husslein–Arco. “This work was specially restored for this exhibition and still sits in its original frame.”

The narrative behind the paintings is just a potent as the works themselves. At the turn of last century, Vienna was exploding with new wealth and cultural renaissance. “This is much more than an addition of masterpieces, it’s about Vienna around 1900,” says Wien Museum Director Wolfgang Kos. “Vienna was a city of logical and political contradiction.”

In 1897, artist Gustav Klimt established the Vienna Secession movement, a rebellion by a group of artists against established art circles. “It’s a show that is complex, because behind all the beauty there are a lot of layers,” explains Kos.

“All these [artists] used aesthetics for cultural representation.”

The new cultural representation included a revolutionary interpretation of how art could be used in daily life. “[Secessionist] Otto Wagner was the father of modern design,” says consulting curator Dr Christian Witt-Dorring. “He saw a discord between form and content in daily life.”

Wagner’s new design vision coincided with a population explosion in Vienna, leading to the widespread adoption of Wagner’s style. “Vienna was a building site and the new architecture was underpinned by functionality,” Witt-Doring adds.

An example of these new design techniques is the original façade of the Vienna Die Zeit newspaper building, designed by Otto Wagner in 1902 and reconstructed as part of the exhibition. The show also includes representations of Viennese sculpture and furniture. Examples of silver service sets, chairs, bookshelves and glassware from Josef Hoffman’s Wiener Werkstatte design company adorn much of the exhibition.

Those enchanted by Klimt’s famous ‘golden period’ will not be disappointed either. The Beethoven Frieze, a stunning, raised fresco-style painting, has been completely restored and pieced together in one room.

The Emilie Flöge portrait, also prized by Klimt admirers, represents both Klimt’s unique portrait style and an important element of his life story. His relationship with his subject, fashion designer Emilie Flöge, lasted for 27 years and was instrumental in connecting the Viennese artisan community with the young bourgeoisie.

The exhibition’s chronological layout ends in 1918, when Klimt, Moser, Wagner and Schiele all passed away, ending the Secession movement.

If there were any lingering doubts about the uniqueness of the exhibition, Belvedere Director Husslein-Arco puts its importance into context. “This is the largest collection, I think ever, of Vienna Secession artists in the Southern Hemisphere,” Husslein-Arco says.

Vienna Art & Design will run at NGV International until October 9.