The NGV Triennial’s Most Fun Work is a Digital, Phosphorescent Whirlpool

Enter the black box and take a wade in pools of light. In an empty, dark room in the NGV this summer, you’ll find dozens of people wandering around in circles looking at the lights on the floor. It’s a digital simulation of the movement of water – like wading through phosphorescent pools. Visitors drag beams of light around with their feet while overhead an ambient, choral soundtrack plays.

This is a living artwork: it only exists when someone is there to interact with it. And it’s one of the most fun works in the NGV’s sprawling Triennial.

Moving creates vortices and vortices create movement is an installation of light and sound based on a digital model of the movement of water. Sensors pick up the movement of your feet, creating ripples and whirlpools. On the Shikoku coast of the Naruto Strait in Japan, whirlpools of up to 20 metres happen regularly. Toshiyuki Inoko has been fascinated by them since childhood. He’s the founder of teamLab, the Japanese digital art collective behind the work.

“These whirlpools or vortices occur due to the differences of velocity in ocean flow,” he says. “There’s an island nearby that creates different speeds of ocean current.”

Inoko set out to create an interactive artwork where a person’s movements create similar ripple effects, drawing a clear line between our relationship with nature.

Experiment with your interactions; each ripple is made of a single particle, and each particle triggers an individual sound. When there’s sustained movement, they chime together to create a choral effect. When we stand still the lights dim, the music slows to staccato stutters and the vortices all but fade away, only to begin again when someone moves.

“In our society people move randomly with no impact,” says Inoko. “But every small movement contributes something positive to our society. Like how small islands in the ocean contribute to the whirlpools.”

“I want the whole of human society to feel a bit more meaningful.” 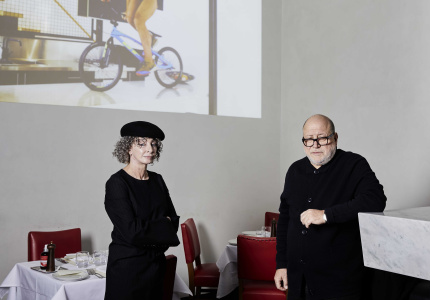