There’s an Indigenous reimagining of The Wizard of Oz (yellow-brick road included); a “Koori kitsch” lounge-room installation; a room dedicated to blak life in urban Melbourne; and several photographic series. 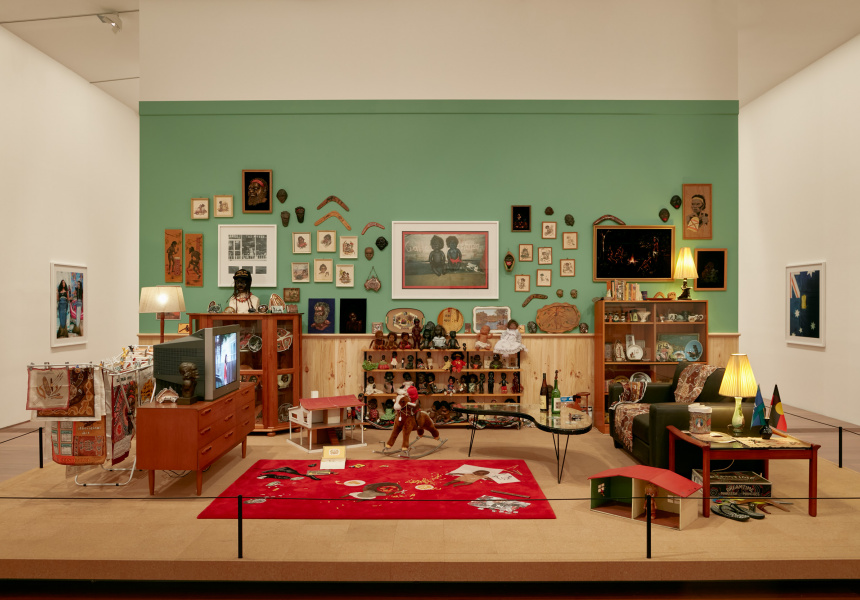 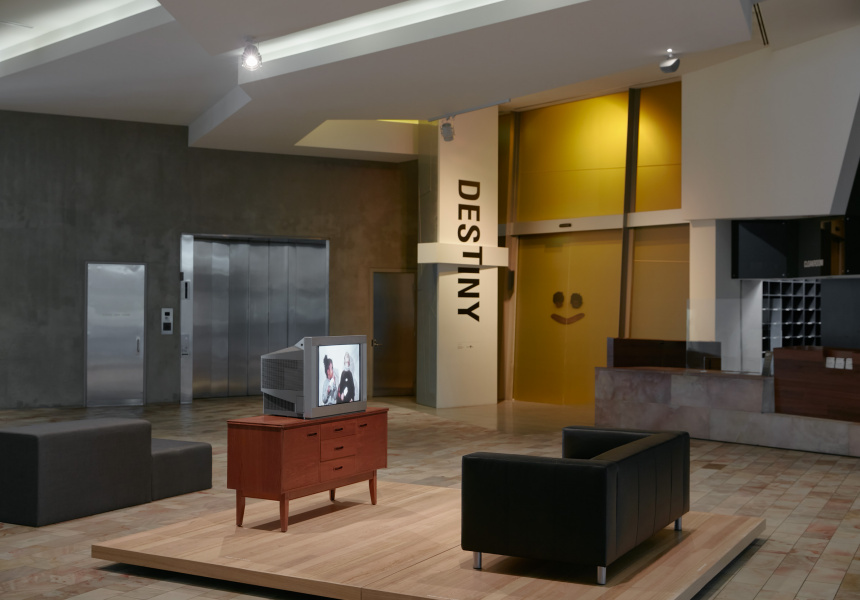 During my time on the Covid-19 roller-coaster, I realised something about art. It’s all well and good for it to be seen online. In fact, I love on-screen art. But a lot of art isn’t made for that. And this is especially true for the works of Indigenous Australian artists, which are often inextricably linked to Country.

Take Destiny, a major new NGV Australia exhibition celebrating the career of contemporary artist Destiny Deacon, as an example. Her largest retrospective to date, which opened today, is everything it should be when experienced in-person – powerful, nostalgic, dark … and even a bit absurd.

Her first solo show in around 15 years features more than 100 artworks – spanning photography, video, sculpture and installation – created over a 30-year period. A number of the pieces came to life with the help of her long-time collaborator Virginia Fraser, an artist, editor, curator and writer.

As soon as the doors open to the exhibition, I’m transported to another world. A yellow-brick road appears, foreshadowing the photo series – Oz Games – Under the spell of the tall poppies – that lies ahead. Created before the Sydney 2000 Olympics, it depicts Dorothy as a black dolly with dainty, sequinned red booties. “The Wizard of Oz is an iconic film and a reference point for a lot of people,” Deacon tells Broadsheet. “Anyone can relate to it and the different characters – I just did my own take.”

Deacon is a descendant of the Kuku and Erub/Mer people from Far North Queensland and the Torres Strait. But she’s also “a proud Melbourne girl”, she says. “It’s one of my frames of reference. I went to primary school, secondary school and university in Melbourne and have lived in different parts of the inner city all my life. I’ve been part of the Aboriginal community here since I was a nipper.”

Several works in the exhibition reveal these links to Melbourne. There’s the gaping Luna Park mouth in Whitey’s Watching, while the Moomba Princess and Moomba Princeling show Deacon’s niece and nephew dressed up in Tudor-style regalia in the City of Melbourne’s Art and Heritage Collection storeroom. Melbourne Noir is a room dedicated to blak life in urban Melbourne, complete with photographs, projections and digitally printed wallpaper.

Deacon studied education and politics before becoming a teacher and then a staff trainer for Aboriginal activist Charles Perkins. In this show, we see that her turn to photography wasn’t a breakaway from these experiences, but a continuation of them. “I’m a teacher by training,” Deacon says. “Hopefully people can learn something from the pictures. I like to make people think.”

Dollies and golliwogs – racist dolls that depict dark-skinned characters – are among Deacon’s most-used subjects. And it’s a reclamation of sorts. She says she “wanted to rescue them, because otherwise they’d end up in a white home or something, somewhere no one would appreciate them”.

At times they appear blindfolded, hooded or with their heads severed from their bodies, such as in Melancholy. They’re also included in a lounge-room installation housing Deacon’s own collection of “Koori kitsch”.

One of the privileges of witnessing series after series of Deacon’s photography in a dedicated exhibition is the overall feel of them. Many of the works are out of focus. Blurry, and deliberately so. Deacon tells me they represent “moods”. “Like a painting,” she says. “Sometimes that’s the way I see things.”

In Deacon’s work, tragedy (and even trauma) goes hand-in-hand with dark comedy. “I do see them as two sides of the same coin,” she says. “‘A laugh and tear in every picture’ is one of my maxims. Maybe I draw on my personal history, but not really as autobiography. It’s mainly thoughts about what’s going on now though, things I read and see in the news filtered through my point of view.”

Destiny runs until February 14 at NGV Australia’s Ian Potter Centre in Federation Square. It’s open 10am to 5pm daily and entry is free, but bookings are required.