NEW16 Launches at ACCA This Weekend

NEW16 launches at ACCA with eight vibrant works from around the country. 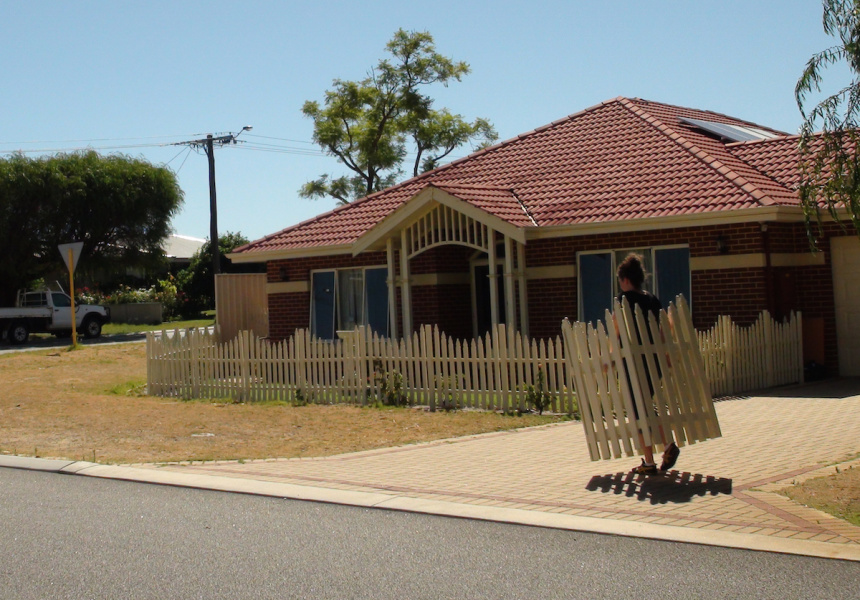 I drop in at ACCA a few days before the NEW16 exhibition is fully installed. It might not seem the best time to visit, but there’s a buzz about a gallery mid-install. There’s no one here but me, the artists (heads down, solving last-minute problems) and curator, Annika Kristensen.

“Commissioning a completely new show like this, you never know what it’s going to be until it’s upon you,” says Kristensen. She looked into 60 to 70 artists from all over Australia before she settled on these eight new works from 10 artists, and says that if anything connects them all, it’s that they all address some kind of tension or threshold. They’re also all made with a sense of art-for-art’s-sake playfulness.

Here’s a glimpse at all eight.

Catherine or Kate – My door is always open, unless it’s closed
Brisbane-based duo Catherine Sagin and Kate Woodcroft have looked inward at their working relationship for their piece. It can evidently be quite difficult.

“Sitting and working at a computer together is a really horrible process,” says Sagin. Their installation takes the form of a workspace, but one that has a built-in option for escape. The desk has been augmented with pedals and wheels, and visitors might not find it where it’s supposed to be. It may not even be in the right building.

Liam O’Brien – At Arm’s Length
Liam O’Brien, also from Brisbane, presents a video piece about social media and social disconnect. Marvel at a sunrise, followed by footage of bored millennials chained to their phones and oblivious to the tangible world around them. Feel the existential despair caused by the clock counting down in the bottom right corner of the screen, timed approximately to O’Brien’s estimated time of death in about 53 years.

This work also extends into the ACCA bathrooms. A soundtrack of notification beeps, text alerts and pinging emails will play in there. The hope is it will distract you from the task at hand.

Anna Varendorff and Haima Marriott – here there are infinite arrangements
Like Catherine or Kate’s wandering artwork, Melbourne-based collaborators Anna Varendorff and Haima Marriott’s work is a series of black-and-brass arches that emit theremin-like hums when touched. Not only does it encourage being touched, but each arch is on wheels. They just beg to be moved around, re-choreographed and re-arranged into new orchestrations.

“When we go to galleries, we’re used to having a purely visual experience, where we stand back and look,” says Varendorff. “But this encourages you to touch the work and even move it around the gallery.”

Tanya Lee - Curtilage
Lee’s multi-channel video work, recorded in her home city of Perth, is a playful meditation on our relationships with our neighbours. Despite living in close proximity, we live separate emotional lives, sometimes with not much more than a thin wall or fence line between us. Lee is interested in breaking that barrier down. It’s uncomfortable watching someone push an eight-foot-long toothbrush into their neighbour’s window to brush their teeth, or to see someone hold an even longer spoon over an apartment balcony to spoonfeed a woman in the next apartment. But why? They’re just neighbourly gestures.

“She actually had real difficulty finding people to do it,” says Kristensen, “which I think speaks volumes about our unwillingness to interact with our neighbours.”

Mason Kimber – Window, Museum, Previous Gestures, Fresco 14 and Fresco 15
Sydney artist Mason Kimber is interested in architecture’s relationship to art. His piece provides a rare moment of stillness and silence in the wild NEW space. He presents several new abstract paintings that talk back to their surroundings. The works all have angular and sharp lines, but look closer and you’ll see not just the texture – he’s emulated the weathered and uneven surfaces of Italian frescos using a combination of plaster, lime and paint – but also reflections of the ACCA building itself.

“The canvasses are portals you can escape into, but they also acknowledge ACCA’s own weirdly angular structure,” says Kristensen. As does the angular, colourful backdrop painted straight onto the wall.

Jacobus Capone - Volta
Jacobus Capone is a Perth-based artist whose work is the most overtly personal in the show. He uses a two-channel video work to discuss his father’s long battle with depression. In this hour-long piece, Capone’s father attempts to re-learn the piano accordion.

“It’s a loaded object for him,” says Capone. “He’s been able to play since he was a child, but he dropped it with the onset of depression. When he put it down it wasn’t tuned, and when he started again, he just picked it up and played it as he left it.”

Nothing here is staged. He goes into monologues, talks about being a child, his divorce. “He’s seen it,” says Capone. “He was disappointed he wasn’t playing more fluently. But these are the moments that I wanted to capture.”

Gabriella Hirst - Force Majeure
The best way to describe the work of this Sydney-born, Berlin-based artist is that it’s an attempt to paint a storm while in its eye. This comically sped-up video work depicts Hirst attempting to hold her canvas still on a picture-perfect hilltop while a chaotic storm rages around her. She doesn’t get far, and around the video projection are some framed examples of her attempts, which are little more than soggy bits of paper with a few splashes of watered-down paint on them.

“It’s a comically absurd gesture, a grand romantic gesture, and ultimately a futile one,” says Kristensen. “How much can you fail and then turn the failure into something productive?”

Julian Day – white noise
In NEW’s final room, Sydney artist Julian Day plays with movement, architecture, sound and the blank page. In a completely white room, six large reams of white paper cascade from the ceiling – they give the impression that the room itself is unfurling. Behind each ream, speakers emit inaudible subsonic frequencies – enough to make the paper shake and ripple, filling the room with the loud, violent sound of a paper storm.

The combination of the extremely white room and extremely white paper acknowledges both the neutrality of the white art-gallery space, and the blank page that can be a starting point – somewhere you might begin an idea.