The latest edition of the Australian Centre for Contemporary Art’s annual NEW exhibition series breaches the fabric of form, function and the framework of the gallery space itself. 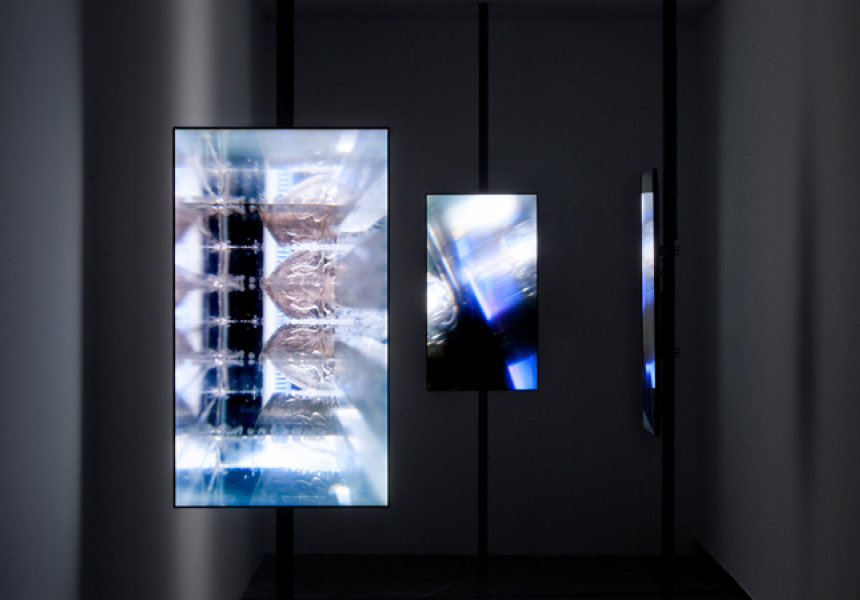 This year’s incarnation of ACCA’s annual NEW exhibition series comes with some baggage. Not only is it curator Charlotte Day’s swansong as associate curator of the gallery (Day was recently appointed director of Monash University Museum of Art, replacing Max Delany after his departure to become senior curator of contemporary art at NGV), but it also comes off the back of the undeniable success of Sydney curator Jeff Khan’s tilt at helming what proved a dynamic and – at least in part – poignantly humanist NEW12.

The series’ missive and its various applications have long divided and – in many cases – riled Melbourne’s wider art community. Indeed, NEW’s exposition of bright young things operating around conceptual art’s more experimental peripheries, not to mention its eschewal of more tradition iterations of painting and photography, seems to alienate as many as it entrances.

Linda Tegg’s vastly scaled video performance work, Tortoise (2013), masks its very protagonists. Set against the austere, stone walls of the NGV’s Federation Court, the work pictures performers shrouded in numerous flexible, mirrored discs. As the performers move, the discs warp and oscillate, creating a nebulous, meandering figure and fracturing and inverting our gaze with a cacophony of stretched and distorted reflections of the gallery itself. It attracts and repels in the same breath. Joshua Petherick’s video installation – spanning three screens strategically positioned in a long, narrow, hallway-like space – also, somewhat laterally, deals with notions of reflection and inversion. Set amid an ambient sound environment, he uses today’s vernacular tools of reproduction (in this case an iPhone camera and flatbed scanner, pressed against one another) as both tools and subjects, creating a shimmering, shifting and poetic series of images via digital technology’s purportedly cold and characterless feedback loop. It’s a huge and visually generous step for Petherick.

Sanne Mestrom’s suite of both petite and towering sculptural works makes for another clear highlight. A different kind of feedback loop, her historically and formally hybridised sculptural works echo with minimalist restraint and painterly flourish. Her installation for NEW13 hones its focus on the counterpointing references of Picasso’s Weeping Woman and the muted still lifes of Italian artist Giorgio Morandi. The centrepiece is a vast stainless steel sculpture that ‘weeps’ water from its highest point – a deconstructed and re-imagined Picasso that inhabits a kind of alien modernism. It could almost be a spomenik [war monument] from the former Yugoslavia.

There are other strategies at play. Alex Martinis Roe continues her, at times longwinded, exploration of text, reading the spoken word and their bearings on community with an installation that traces and enacts the operations of the Milan Women’s Bookstore Collective. Benjamin Forster’s constellation of tiny LCD screens and interconnected, automated computer modules – which are programmed to type an ever-changing essay using Noam Chomsky theories of generative grammar and enact various other linguistic tasks – meanwhile, continue the idea of feedback, deconstruction and reiteration, where Jess MacNeil’s 16-milimetre film work focuses on the notions of decay and erasure, as a panning shot of Trafalgar Square disintegrates and regenerates in front of our eyes.

Scott Mitchell shifts his gaze on the gallery itself, installing a swathe of small, strategically angled mirrors that capture the light outside and direct it into a space within the gallery, where it activates a pair of solar balloons.

It’s a powerful analogy for the exhibition as a whole. While disparate in terms of practice and theme, the artists that populate NEW13 each flaunt a particular criticality. They are unwilling to accept objects, technologies, architectures, genres and gazes as disconnected. The scanner is the scanned, the subject is the mirror, minimalism is cubism and the outside is in.