A New Communal Woodworking Space in an Old Abbotsford Warehouse

At The Shed, you'll find hot desks and permanent spots for beginners, hobbyists and full-time makers. 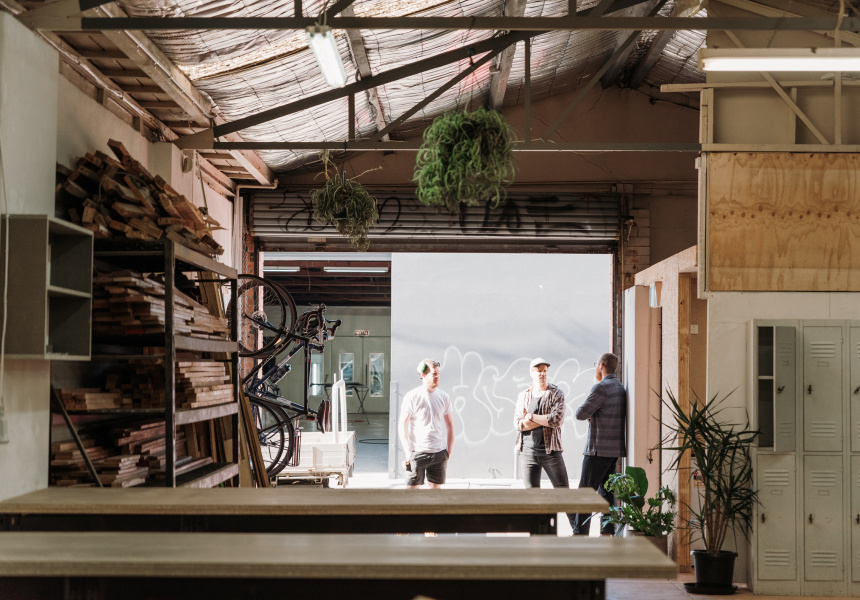 After moving to Melbourne almost five years ago, Dan Sleeman found share houses and apartments too cramped to pursue his interest in carpentry. So he decided to open The Shed in Abbotsford, a co-woodworking space for him and other budding carpenters to share.

Sleeman picked up his passion for timber in the small town of Pittsworth in Queensland’s Toowoomba Region. His grandad “Chub” was something of a cult figure in the community, and was known for his woodworking skills, which he practiced in his backyard corrugated-iron shed.

“He’d get up and go out there at the same time every day, only coming out to eat. My dad died when I was young so he was the main father figure in my life,” says Sleeman. “I’d just go in there and hang out with him for hours, watching him make craft items like timber puzzles and stools.”

Sleeman tried to set up workshops at the back of apartment complexes and in friends’ spare rooms, as well as in northern-suburbs co-working spaces, but couldn’t find anywhere dedicated purely to woodwork.

Leveraging his entrepreneurial skills (he works for RMIT’s Activator program, helping to educate budding entrepreneurs) and friends willing to lend a hand, he officially launched The Shed in June last year.

The 220-square-metre warehouse is a narrow light-filled space with nine benches; power tools including a drop saw, table saw, jointer and drill press; and plants for good measure. Twenty memberships are available for $95 per week, and grant access to the tools, bench space and storage. Or there’s a $70 per day fee if you just need a few days to finish something off. All new members must complete a $100 induction course to familiarise themselves with the workshop’s tools and safety protocols.

“For the most part I see it as being something for hobbyists who want to learn the craft. It’s affordable, so they don’t need to sell furniture or what they make to pay for it,” says Sleeman. “It’s a place where they can experiment on the weekends and just dabble.”

Everyone gets his or her own key, allowing 24/7 access. There’ll be Saturday open days and casual classes starting in February, including the introductory class “Woodwork for Fun” and beginners’ sessions where you’ll learn to cut timber to size, assemble and finish furniture.

“With so many of us working all day at computers and in digital spaces, I’ve come to find so many people want a connection to tactile skills,” says Sleeman.

“There’s a lot to be gained from doing something with your hands and seeing a tangible outcome.”