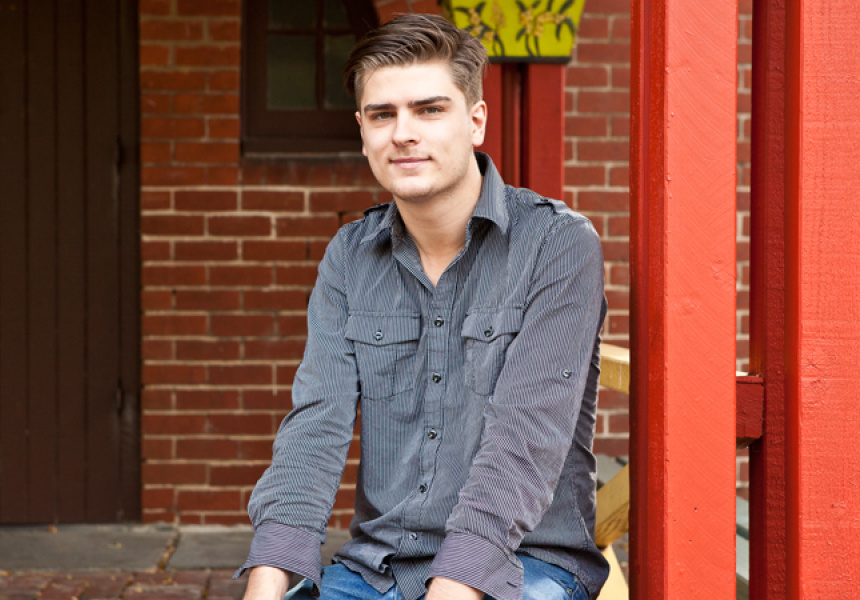 When Patrick McCarthy established Melbourne’s award-winning independent company, Mutation Theatre, back in 2008, it was more or less a one-man show. He wrote and performed Howard Arkley and Suburbia, portraying the troubled artist in a piece that Art Monthly magazine described as “an absorbing melee of malevolence, humour and spiritual bliss”.

Five years on and the 23-year-old artistic director has pulled together something of an ensemble. Mutation’s latest piece, Love Me Tender, by in-demand Australian playwright Tom Holloway, opens at Theatre Works on February 20, with two cast members – James Tresise and Matthew Epps – joining the troupe for the fourth time.

“I like the idea of building an ensemble, whether it’s actors or designers or whatever,” McCarthy reveals. “It makes people feel comfortable and safe in order to take risks and really challenge each other.”

McCarthy favours a free-flowing, collaborative style, with an emphasis on improvisation. “Even in things that are more scripted, there’s certainly a freedom and room for everyone to play,” he says. “We enjoy that rigorous and also quite fun process in the rehearsal room.

“We have a couple of great new actors in Love Me Tender, Nick Pelomis and Sarah Ogden. They bring a real energy.”

McCarthy – who picked up his collaborative approach from some of his favourite filmmakers, including Paul Thomas Anderson and Wes Anderson – tackles wildly different plays with the ever-evolving Mutation. So Blue, So Calm, written and directed by McCarthy and presented at the 2011 Melbourne Fringe Festival, was a dreamy, light-hearted affair. So he followed it up with Liberate Yourself From My Vice-Like Grip!!!, a darkly violent, claustrophobic piece, formed from intense improvisational periods, at 2012’s Next Wave Festival.

Suffice to say, McCarthy relished the change of tone. “It was really locking four guys in a room to see what would happen, and you end up in all kinds of weird spaces,” he laughs.

Next Wave was an inspirational period for the company, interacting with a huge range of artistic disciplines, from dancers to musicians, visual artists and curators. “You get opened to a whole lot of different perspectives and talk about each other’s work. That was a wonderful experience. It also clarified why we liked theatre and helped us think about the design elements of theatre in a more holistic way.”

Even in independent theatre, McCarthy believes that companies can get a little too comfortable, doing the same stuff over and over. He hopes to avoid that temptation with Mutation.

It was their double-header at the 2010 Fringe – an adaptation of illustrator and author Shaun Tan’s The Arrival and Katy Warner’s These Are The Isolate – that really got Mutation noticed. The latter was re-mounted for a return season at Theatre Works, having scooped that venue’s inaugural Fringe award.

McCarthy is looking forward to returning to the Acland Street venue with Love Me Tender. A re-imagining of an ancient Greek play that draws on the aftermath of the Black Saturday fires, McCarthy couldn’t wait to tackle Holloway’s piece after watching Red Stitch’s performance of Red Sky Morning, then catching And No More Shall We Part.

“It’s the kind of writing I love to see,” he says. “Innovative and experimental, but fundamentally Australian, fresh and honest. When I got my hands on Love Me Tender two years ago, I knew I had to do this.”

He was drawn to its “incredibly tight, architectural” script and intrigued by Holloway’s refusal to attribute lines to characters. “It’s very open to interpretation. You could do 10 different productions of this play and they’d all be completely different.”

While he says you wouldn’t want to get too insular, he worries Australia doesn’t have enough faith in home-grown theatre. “We’re constantly looking to Europe and America to measure ourselves against that, but people like Back to Back Theatre and Chamber Made Opera are touring the world, being raved about. We’re as good as anyone.”

With any luck, Love Me Tender will strike a chord with the home crowd. “Hopefully the audience gets to see something really alive, that’s made for this moment. It’s a play about us.”

Love Me Tender is showing at Theatre Works, St Kilda, from February 20 to March 2.