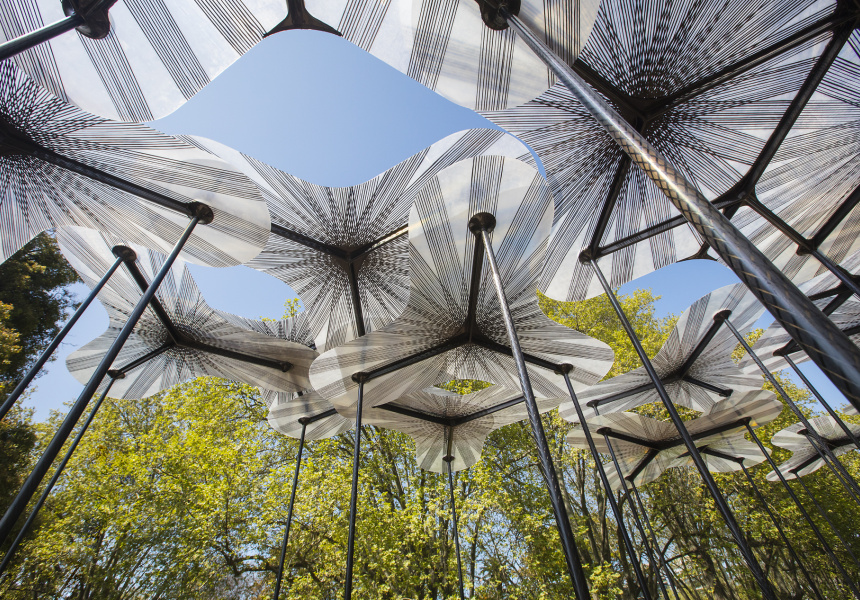 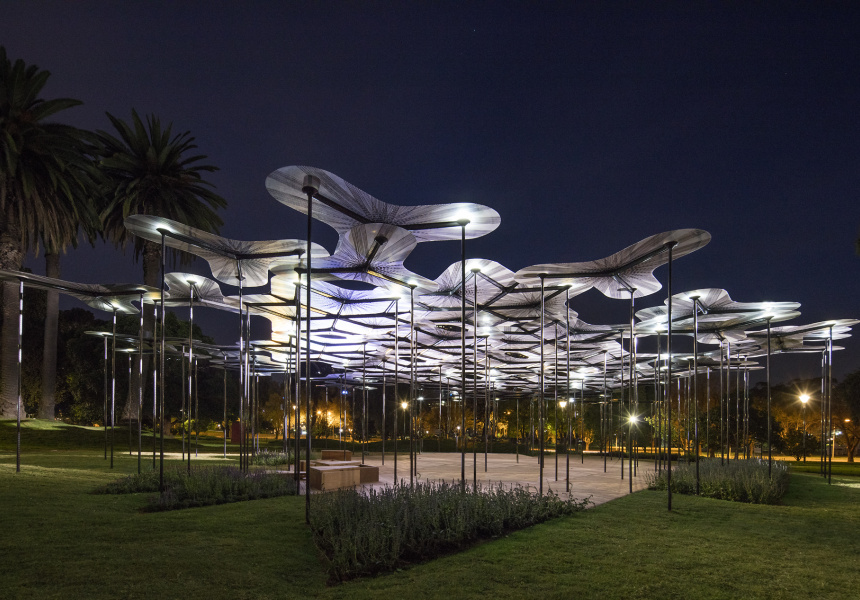 In a city that potentially bakes in 40-degree heat, then gets rained and hailed on all in one week, you’ve got to admire Amanda Levete’s interpretation of the MPavilion brief for 2015. It’s a structure that integrates the elements, rather than fights them.

“We really wanted to subvert the notion of a pavilion,” Levete tells Broadsheet. “We wanted to design something that moved with the wind rather than keeping it at bay.”

Her initial brief was to create a structure that mimicked a forest canopy. The result is a high-tech canopy open to the elements that moves with the wind. This means you can enjoy a balmy summer’s night during one of the pavilion’s many talks, presentations, or live performances (though we’re not quite sure what happens when it hails).

At first this structure – opposite the NGV in the Queen Victoria Gardens – doesn’t appear like it’s doing much, but there is more to it than is at first obvious. This pavillion has no walls. Instead, 95 carbon-fibre columns hold the roof up. The roof is made of pieces of petal-like translucent resin (akin to clear Perspex sheets, but stronger) only a few millimetres thick. These will be incorporated into a performance set to music each night – each petal is fitted with LED lights.

For followers of the British architect, this design achievement is nothing new. Levete is famous for using boat builders to construct the media centre at the Lord’s cricket ground in London – a design that won her the 1999 Stirling Prize (and saved her former architectural practice from bankruptcy). This year she collaborated with local fibreglass specialist mouldCAM for her roof. It is also responsible for RMIT’s green blob.

Speaking of great achievements: this Wednesday you can grab a free coffee from 10am to 4pm thanks to Three Thousand Thieves and Allpress.

There’s plenty in the program over the coming weeks: live music, design talks and collaborations with Melbourne Festival and The School of Life. You can even catch Levete in conversation with MPavilion’s patron, Naomi Milgrom, and V&A Museum director, Martin Roth tomorrow evening.

Free coffee will be available from 10am to 4pm on Wednesday October 7 at MPavilion. 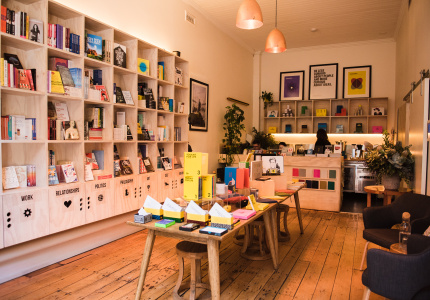