More Than a Game

Australian rock royalty dust off their footy boots for the Reclink Community Cup. 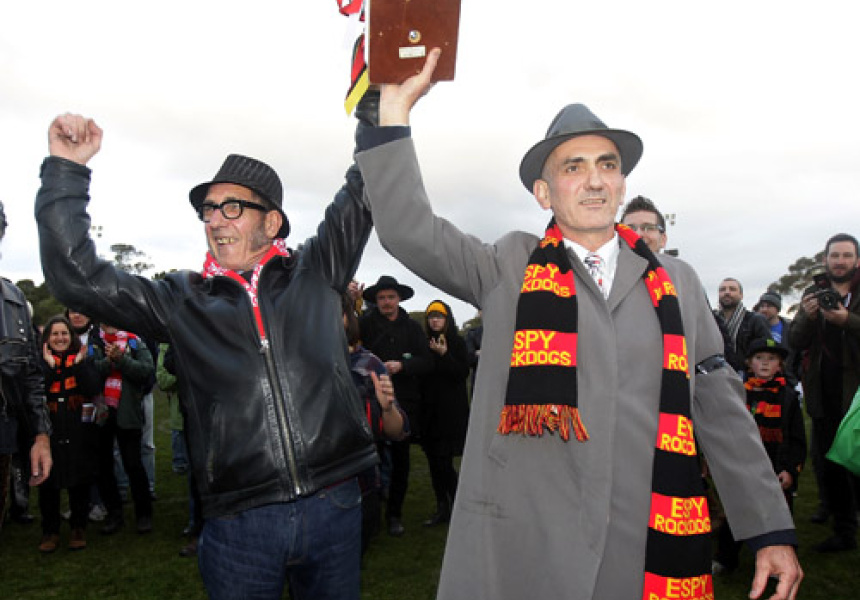 Successfully bringing together the often dichotomous realms of sport and music is a tricky business that has undone many a successful career. Think Meatloaf at the 2011 AFL Grand Final, or Russel Robertson on The Footy Show’s ill-fated ‘Screamers’ segment. This is what makes the Reclink Community Cup unique.

For the past two decades, an assortment of Australian rock royalty have dusted off their footy boots for the annual scratch-match between the ‘Rockdogs’ and the ‘Megahertz’, made up of broadcasters from community radio stations Triple R and PBS FM. The footy is best described as entertaining, with the more skilful performances usually coming from the stage. Many, like Reclink CEO Adrian Panozzo, have been involved with the event since it’s inception two decades ago. Panozzo fondly recalls the moments that have become Cup folklore. “Kram played for the Rockdogs one year. They all ran off the field at half-time and he runs straight onto the stage in his footy gear and starts smashing the drums,” he recalls, also mentioning Tim Rogers “throwing a purple jacket over his Rockdogs jersey and ripping on his guitar.”

For all the fun and frivolity, there is a serious side to the day that is not lost on the participants. Reclink provides 1000 activities per month around the country for victims of mental illness, addiction, domestic violence and unemployment among others. These activities range from homeless footy leagues to guitar circles and aim for participants to “feel better about themselves for a day or turn their lives around”, and all funds raised on the day are channelled towards supporting these projects.

This year’s Reclink Community Cup will be held at Elsternwick Park on Sunday June 23, with Paul Kelly coaching the Rockdogs and Dan Kelly returning as captain. Melbourne legends Beasts of Bourbon will headline the event, supported by Super Wild Horses and King Gizzard & the Lizard Wizard.

The 2013 Reclink Community Cup kicks off at Elsternwick Park on Sunday June 23. Gates open at noon, with live music starting at 12.15pm and first bounce at 2.30pm. Entry is $10 for adults and $5 for children under 16.