Moomba’s Past and Present: 60 Years of Parade Floats

As Moomba Festival gears up for its 60th anniversary parade, we take a walk through the busy warehouse where all the props, floats and costumes are constructed. 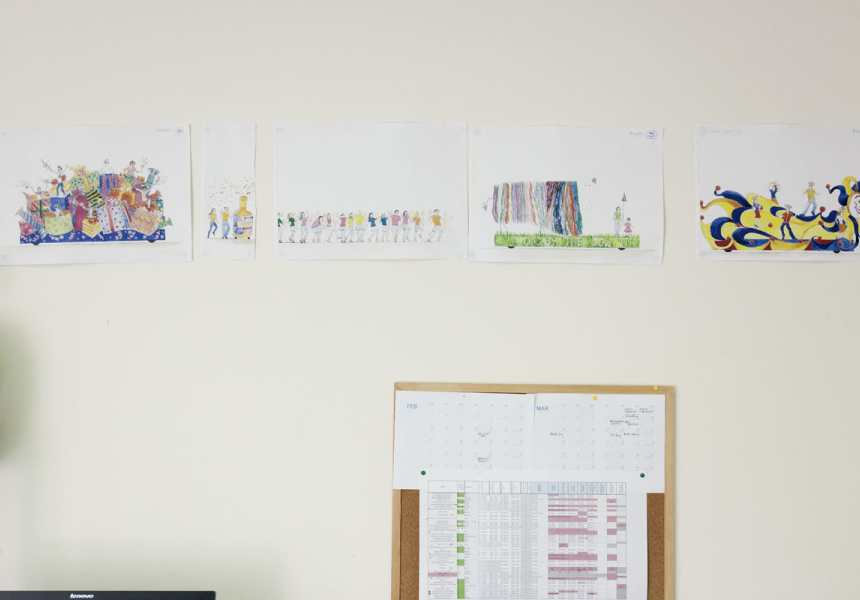 There is a huge banner overlooking the Moomba Festival workshop emblazoned with: “The Dream Factory”.

Throughout the Yarraville workshop there are glimpses of what punters can expect to see at Moomba Festival’s 60th anniversary parade. One of the first things to stand out is a massive commemorative float covered in molded, polystyrene foam flowers. It will carry dancers and the People of Moomba – 10 individuals who have been chosen to represent the parade’s six decades and three generations of festival-goers and contributors.

As parade director Sue Broadway walks us through the warehouse, she points out the remnants of Moomba parades past, as well as half-finished floats yet to be painted and polished for this year’s parade.

The Diamond Float by theatre designer Darryl Cordell is waiting for the huge, laser-cut diamonds that will cover it. Meanwhile, The People’s Float – which fittingly looks like a Dolly Varden birthday cake – will require some audience participation to complete. Moomba-goers will be asked to cover the cage-like dress with paper flower arrangements.

“We’ve been preparing since December,” says Broadway. She explains that the milestone parade, “will celebrate Moomba’s colourful past as well as what is to come in the future.”

This year’s Moomba Monarchy is a fitting reflection of the festival. The king, Bert Newton, was also the 1978 Moomba king and as a teenager he did a radio broadcast of the parade from a Swanston Street rooftop. Queen Lucy Durack has in recent years become a well-known Melbourne face since playing Glinda in Wicked and Elle Woods in Legally Blonde.

Over at the costume workshop, designer Laurel Frank is busily cutting material for the Jester Float. “We’re racing against time to get all the costumes and props ready for the parade,” she says.

The Moomba Festival is on this Labour Day long weekend in Melbourne’s CBD, with activities and entertainment all weekend, including the infamous Birdman Rally on Sunday at noon and the parade on Monday from 11am. If you’re up early enough, you might just see a strange convoy of colourful floats making their way out of the Dream Factory and into the city.

For the full Moomba program from March 7–10, visit the website.