Melbourne Music Week Is Back

Though still only a baby in its third year, Melbourne Music Week knows how to throw a party, and this year the annual festival looks set to once again surpass our expectations. Though still only in its third year, Melbourne Music Week is a festival that the city has come to embrace in no time. Garnering attention after winning multiple awards in its launch year of 2010 and bringing the colossal art installation and live music venue that was KUBIK in 2011, the anticipation surrounding this year’s nine-day extravaganza is palpable.

From the outside, the premise of this year’s festival seems much the same as that of previous years, but there are some crucial points of difference. The classic events such as Live Music Safari and Cinemix have stayed, as has the ambition to host as many gigs across the city as possible with as many imaginative venues playing host to boot. But this year, says curator Elise Peyronnet, the real treat is where?house, a hub located in the Argus Building, on the corner of La Trobe and Elizabeth Streets in the heart of Melbourne’s CBD.

where?house is set to act as the mainframe for this year’s festival, playing host to several of the 90 scheduled events happening throughout its nine days. “The idea was to take over a building in the CBD and retro-fit it into something amazing. I think the bands that will be playing there will have never played in a venue like this before, so it’s very exciting,” says Peyronnet.

By day, where?house will be serving up edible delicacies from Touché Hombre, Fancy Hank's BBQ, I Love Pho and Huxtaburger as well as hosting workshops and a number of the events as part of the Self Made series. By night, it will be transformed into a one-of-a-kind performance space, hosting the likes of House de Racket, Naysayer & Gilsun and Oliver Tank among countless others.

But keeping true to its style, the festival is hardly set to put all of its eggs in one basket, and has also scoured the city far and wide for other happily obscure venues. There’s also the photographic series Look.Stop.Shop that will be taking over FAT, Polyester Records and Prudence Bar.

“It’s about finding locations that are really unusual,” says Peyronnet. “This building [the Argus Building] is something that everyone knows about and passes by, but to be able to open it to the public and for them to see inside is really amazing.

“All of the performers will be taken out of their comfort zone,” she promises. “Even with where?house, the scale will be something they are not expecting.”

Melbourne Music Week is running from November 16 to 24. For more information, head to melbourne.vic.gov.au/mmw 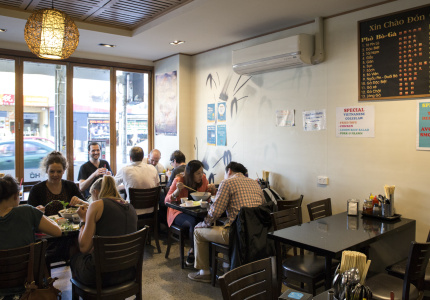