Melbourne Art Week Is Upon Us

Galleries are popping up in hotels and supermarkets, absurdly tanned lounge singers are accosting people in the street, and there’s a bathroom filled with flowers – it must be Art Week. 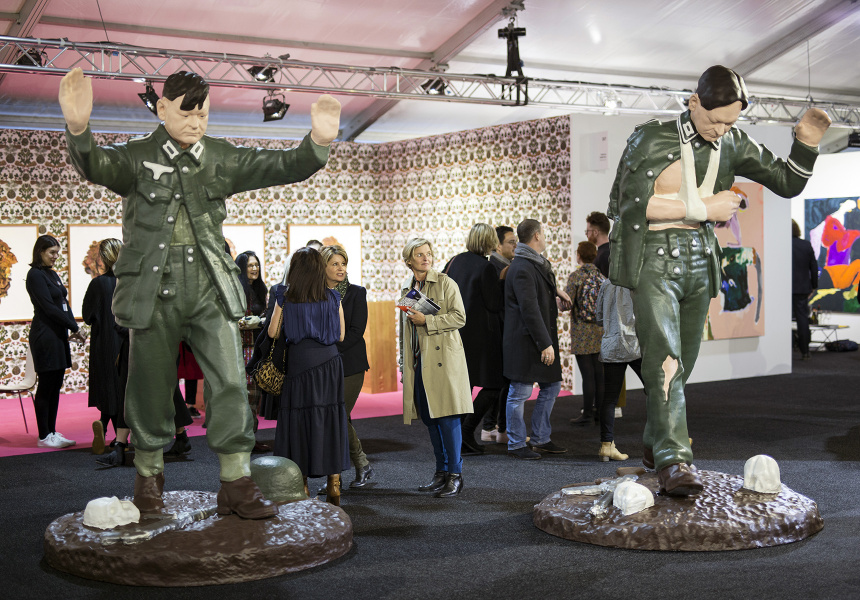 Photography: Courtesy of the Melbourne Art fair
1/12
by Will Cox
Share

After a few years’ break, the Melbourne Art Fair is back. This year the main event is in a big tent, pitched on the gravel next to ACCA.

Just inside are twin sculptures of giant toy soldiers, arms up in surrender. At their feet, guns and skulls. This is a newly commissioned piece from purveyor of the macabre and the comic, Ronnie van Hout (for more van Hout, head over to Buxton Contemporary for No One Is Watching You, an exhibition spanning 30 years of his practice). As with much of van Hout’s work, both statues bear his face. There’s no explanation or context offered, but seeing his face glaring down gives the work an eerily personal depth.

Giving up is implied. It’s a relief to be told that’s an acceptable strategy, and it’s a good approach this weekend. You won’t see everything. There’s a bevy of ideas and stimulating visuals. The fair is essentially a market for art collectors, but there’s plenty to see and do if you don’t plan to drop five or six figures into the art market.

Each gallery’s booth is a little pop-up exhibition in its own right, some with exclusive commissions and installations. Let your guard down, open up a bit.

It might help to start just behind the giant toy soldiers at the Tolarno Galleries booth. As part of an installation by Elizabeth Willing, which also incorporates wallpaper, collage prints and sculpture, there’s a cocktail on offer made with valerian, a herb known for its sedative properties.

With senses numbed, we can continue. At Gertrude Contemporary’s booth, I chat to performance character Renny Kodgers, an absurdly tanned lounge singer.

Art Week, though, refuses to be confined to the Art Fair. There are plenty of satellite events – both official and unofficial.

Just around the corner from ACCA there’s a guerrilla gallery hosted in the vegetable aisle of the Sturt Street IGA. It’s the work of online art traders Blue Thumb, making the point that art buying should be as accessible as grocery shopping.

On the way back to town, look out for a new video work from Jess Johnson and Simon Ward at Federation Square, combining Johnson’s kaleidoscopic imagination with Ward’s 3D-animation works.

At the top end of the city is alternative art fair Spring 1883. There’s no open-plan convention space here. Instead, 24 galleries are dispersed across three floors of suites in the Windsor Hotel. It makes for some interesting uses of space.

Some gallerists revel in the ad hoc nature of it. Paintings are laid out on beds; there’s a Brook Andrew piece last seen hanging at the NGV is propped lazily against a wall; in a storage room, a video by Laresa Kosloff presents unwitting gallery visitors, filmed looking at art, set to Whitney Houston’s I Have Nothing.

The curtains are drawn in Michael Bugelli’s suite.

“This is a carved wooden ouroboros,” says a man inside the room, pulling back bedsheets to reveal a sculpture of a snake eating its own tail by Heather B Swann.

Bugelli isn’t the only one to incorporate the hotel’s functions. Elsewhere, there’s a Patricia Piccinini sculpture of two entwined evolutionary quirks half-buried under the sheets. Tim Woodward’s piece displays the contents of the minibar. In one room, Madè Spencer-Castle and Jeremy Eaton have filled a bathroom with flowers. In another, the bath is full of ice and bottles of champagne. This might not be an exhibit. The gallerists do seem to be in a good mood.

On Saturday, audio artists Sonia Leber and David Chesworth will take guests through a sonic walk of the fair and exhibits. A panel will discuss the invisible voices of Australian art in Indigenous Archives and Storytelling.

In a Kensington warehouse, The Other Art Fair has yet more of everything. There are guided tours, zine-making workshops, augmented reality installations, and 88 emerging and unrepresented artists – almost all from Australia – selling their work directly.

Melbourne Art Week is on now, and continues until August 5.