Man on the Ground

The National Gallery of Victoria’s new director Tony Ellwood is redefining the institution’s relationship with artists and the public alike. He chats with Broadsheet about the challenges of changing course. 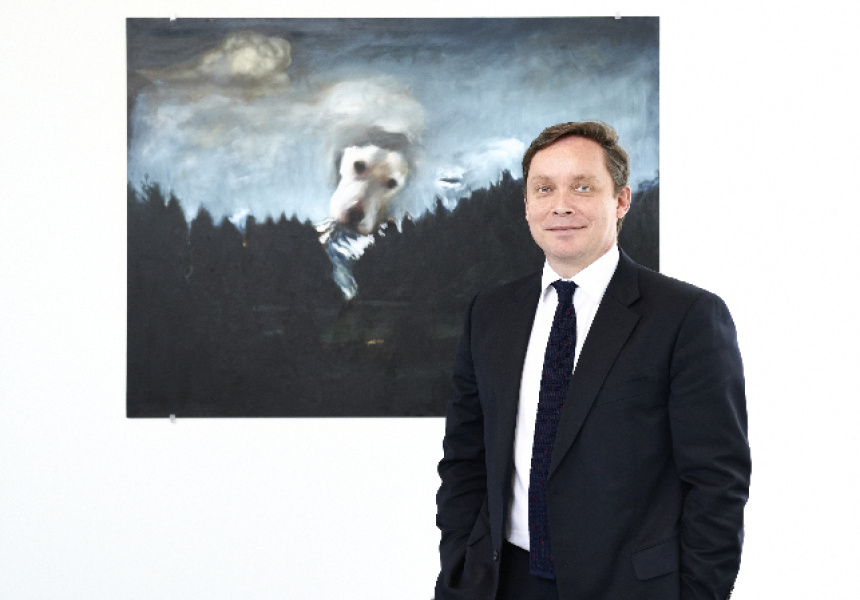 That it takes almost a month to confirm a solid interview time with Tony Ellwood says something relatively steadfast about the man’s schedule since replacing the retiring director of the National Gallery of Victoria, Dr Gerard Vaughan, earlier this year.

The momentum at which he enters his office foyer, flashes a smile, exchanges information with his executive assistant, runs his eyes over some notes handed to him by his media officer and extends a hand in greeting articulates it in even more clearly. Pounding the pavement may not be a task usually associated with the directorship of a major cultural institution, but since Ellwood assumed his new role in August – after five years steering Queensland Art Gallery and its sister site the Gallery of Modern Art (GoMA) to become one of the most innovative and popular art institutions in the country – he has been one of the most visible, and visibly active, gallery figureheads in recent memory.

It’s no mistake. Taking a seat at a meeting table that spans one wall of his light-filled corner office, his back to a typically brooding surrealist landscape by Melbourne artist Louise Hearman, he describes his first few months in the job in terms of ensuring the gallery’s “visibility” within the wider Melbourne art context, to “expand the vision” of the NGV’s collecting patterns and, of course, to “enact that rather quickly”.

“I can’t ask the community to get behind me if I’m not getting behind them,” he offers matter-of-factly. “I want to demonstrate, as much as I can, how committed and engaged I am and how much I value being a part of it – and a real part of it.”

It’s something that has been keenly felt in the Melbourne art scene. While Ellwood’s August speech to the Melbourne Press Club prefaced a significant shift toward contemporary art on both a local and international level (an area for which his predecessor Dr Vaughan had endured his share of critique), his first few months in the job have seen him hit the ground running, acquiring several younger Australian contemporary artists for the first time – such as multi-disciplinary artists like Ash Keating, painter Juan Ford to expat photographer Polly Borland – and making regular appearances at galleries around town. The appointment of popular Monash University Museum of Art (MUMA) director Max Delany to the coveted role of senior curator or contemporary art in October only confirmed the NGV’s shifting gaze, as did the announcement of Melbourne Now, a major exhibition featuring the work and input of a swathe of contemporary Melbourne working across various mediums and contexts, in late 2013.

Such an early flurry might be dismissed as good old PR, but nonetheless, Ellwood has managed to generate a genuine sense of excitement and good will among a community of artists and galleries who had, for some time, felt ignored by their state’s preeminent institution. “It’s something I take very seriously,” he says. “The sector just wants to feel like they’re relevant and even just having you come in and say ‘nice show’ and introducing yourself as an NGV employee means a lot.”

That said, he does still feel as if he’s flying by the seat of his pants. “When you first walk into a job and people ask you to tell them about your vision, the fact is that you’ve barely even put your biro down on your desk,” he laughs. There will be a couple of laughs today. For all the aforementioned hurriedness, Ellwood is undeniably personable and unpretentious in his conversation and way, a quality that one could reasonably assert to have marked his time at GoMA, which saw the gallery embark on a distinctly approachable, inclusive and even playful course. Indeed, there are the flashes of grinning self-deprecation, the low-key admission that today is in fact his birthday and the smiling evasion. “You don’t want to know how old I am,” he laughs (he’s 45).

It belies his precociousness and ambition. He was born in Alexandra and he spent his childhood growing up in rural Victoria (from Tallangatta to Warragul and eventually to Bendigo). He still remembers his first childhood daytrip to the gallery he now runs, describing the experience as finding his “safe place in the world”. He would go onto study art history, painting and museum studies at university, before moving to the Kimberley to run the Waringarri Aboriginal Arts Cooperative. He took up the directorship of the highly regarded Bendigo Art Gallery in his late twenties (where he helmed a rebuild and oversaw a 300 per cent audience expansion), later graduating to the NGV where he would fill various roles for four years before eventually being appointed deputy director (a post he would hold for seven years).

By the time Ellwood took the reins at GoMA in 2009, relocating to Brisbane with his partner Tom Mosby (a solicitor and former NGV employee from the Torres Strait Islands), he was already understood as something of a maverick in the often stuffy world of the art institution. Indeed, many have since speculated that his personality and vision were a little too unconventional for him to progress any further at the NGV during his deputy directorship.

While Ellwood won’t be drawn, he will admit that his time had come. “I suppose I was at that point where I started to form views that were not necessarily institutional views,” he says, pausing a moment in search of the right words. “But I had to work within a bigger institutional set of values and I fully respected that, and I felt that need to go out and express an alternative point of view…I knew that I had to leave to do that.

“Leaping into the unknown can be a really frightening thing, but what you get back…well, it’s best thing you can possibly do.”

While Ellwood’s tenure at GoMA – which brought about a series blockbuster shows, including Andy Warhol, Picasso and Yayoi Kusama’s Look Now, See Forever – saw it rise to become one of the most popular galleries in Australia (it even pipped the NGV as the country’s most visited gallery in 2010), not all have been fans of his approach, with some critics deriding his quest for popular appeal as turning the gallery into a “fun park” rather than a place of scholarship.

It’s the one moment during our interview in which Ellwood’s countenance turns. “It’s a cheap shot from one or two more conservative art critics,” he says calmly, doing an admirable job of masking his frustration. “I don’t think the standard of the scholarship has ever been depleted as a result of being more inclusive.”

Still, he’s at pains to stress the “balanced”, “incredibly rich, historic program” that he will administer at NGV – with a twist, of course. “Historic shows don’t always have to look like a pastiche of the past,” he says. “That’s a very old-fashioned way of talking about history… So how do we respect the environment that helps the work read well – which is paramount – but how do we actually breathe some life into it so that it makes us feel like we’re walking into a 21st century institution? It's that sort of tension that I’m interested in.”

Ellwood clearly sees the NGV as Australia’s art paragon. It’s been widely publicised that he knocked back the offer of a significant salary increase at GoMA and an opportunity to interview for the directorship of the Art Gallery of New South Wales to return to a Melbourne institution facing government funding cuts and various other pressures.

But it’s more than just the gallery that led Ellwood and, of course, Mosby back to Melbourne. “There’s a familiarity that comes with it and the fact that we grew up in it together as a city and I love it so much.” A pause. “For me, there were so many years in my twenties and thirties where I just didn’t question that the community I lived in was open-minded, embracing of all forms of culture and were prepared to take artistic risks, and then when I didn’t have that…sitting up there in Queensland, I couldn’t think of another city that could make me, personally, so comforted.

“Food culture and street culture are vital to a city that enables an evolution of artistic ideas and values,” he urges, smiling. “Melbourne’s got it in spades and I just want to makes sure that its key institutions – like this one – mirror that back.”