The laidback Sydney-based couple behind design label Page Thirty Three are using their creative intellect and design skills to transform household objects. We caught up with one half of this inspiring duo. 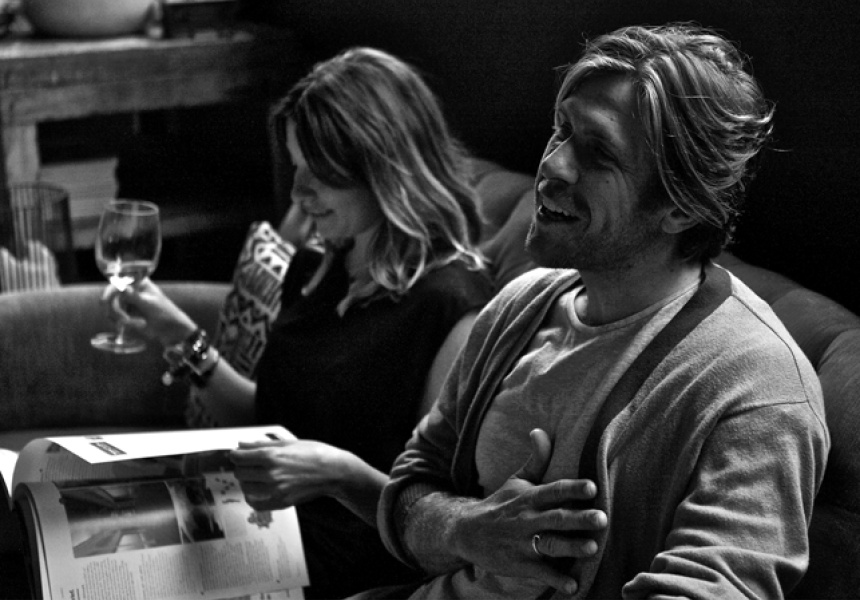 It all started with a fly swatter. “The fly swatter guitar was an idea brewing for some time,” laughs Ryan Hanrahan, one half of Page Thirty Three. It’s the kind of product that perfectly exemplifies the idiosyncratic ideas of he and partner, in life and business, Bianca Riggio.

With backgrounds in fine arts and graphic designer, the two had barely been together three or four months when their relationship turned a new chapter and Page Thirty Three was born. Fusing art with homewares, functional, everyday household objects were given a playful, light-hearted touch.

Now 18 months down the track, Page Thirty Three is flourishing. The couple managed to survive a manic Christmas rush, and have come out the other side with lessons learnt. For Hanrahan, it was an experience that showed the business side is just as crucial as the creative, describing their experiences so far as a quick ride that requires, “working your guts out at things you have no idea about.”

In an industry where the word ‘sustainability’ has become something of a hollow catchphrase, Page Thirty Three embraces the concept, but is also wary of it. Hanrahan points out that their sensitivity and dedication to making meaningful pieces is the result of hard work and dedication, but is realistic about just how sustainable an object can be. “It’s almost impossible for anything to be 100 per cent Australian made and renewable,” he says. “Our objective is to be at least 80 per cent of the way there for each piece.”

Current collection, Entertaining the Myth, plays with the lighter side of their work and the bubble they occasionally find themselves in. “You work so hard towards something…sometimes you realise the context you’re working in is a bit false.”

This spark of irony is perhaps most present in their Burning Bank incense burner. Made from recycled aluminium cans, this bank-shaped burner holds both humour and enlightenment, as incense is placed inside and smoke drifts out the windows – allowing you to indulge in the smug make believe of watching the system burn.

As well as the intention to preserve energy and make art, Hanrahan adds that the couple’s intention for the collection is simply to “make you happy”. With everything from oil burners and fortune cushions to a unique jigsaw serving plate and even their very own Page Thirty Three bath tonic.

But it is the Cinematic Light Box that is one of Page Thirty Three’s most popular items. Australian made, it’s finished in the company’s Brookvale warehouse and draws inspiration from classic cinema typography and display. Each Light Box comes with 103 different letters, allowing you the freedom to create whatever you like.

Other favourites among the collection include the Wooden Milk Crate, taking the classic functionality and simplicity of a milk crate and making it beautiful, the crates can be used as side tables, seats or even stacked to create shelving.

With a balance of resourcefulness and a relaxed attitude, Page Thirty Three sees creative chatter transformed into imaginative pieces for the home.