Lightboxes placed around RMIT and Melbourne Central showcase some of the finest student art coming out of RMIT’s Melbourne and Hong Kong campuses. 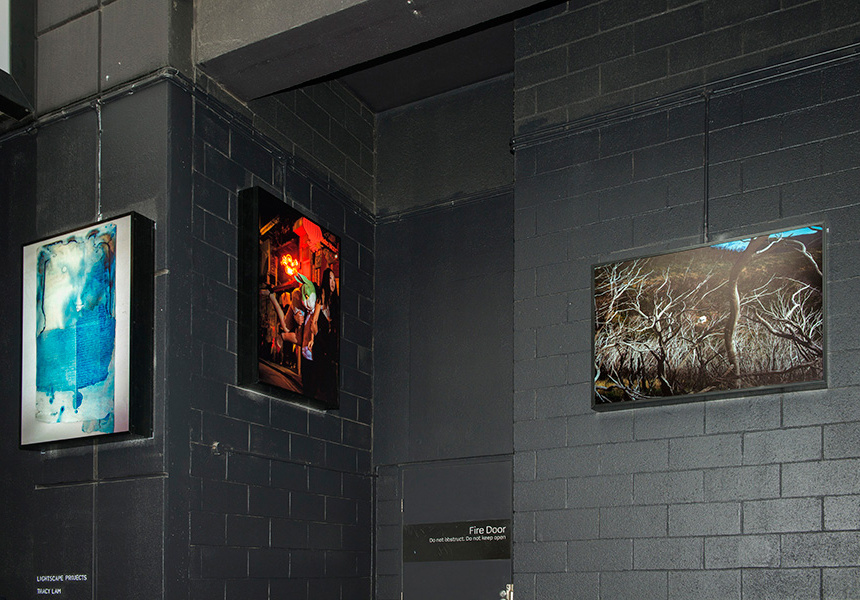 If you’re an art student, it’s not everyday your work is put on display for thousands of people as they make their way to work or class. That’s exactly the opportunity that RMIT’s Lightscape Project, now in its sixth installment, offers 13 students from its Melbourne and Hong Kong campuses.

For Melburnians, the outdoor show offers us the chance to view innovative, top-quality art without having to pay admission, or even break stride.

The exhibition, which ends on September 28, showcases a diverse and striking collection of student work in, “underutilised urban space” around the university, says Andrew Tetzlaff, one of the show’s curators.

Just off La Trobe Street in the CBD, in an easy-to-miss walkway between Swanston and Russell Streets called Rodda Lane, several lightboxes are attached to a red-brick wall belonging to the RMIT School of Arts. The lightboxes are backlit, flat containers with a translucent surface, such as glass. They’re often used for advertising, but as a means to show art, they essentially act as an illuminated canvas.

In one of the boxes, a mixed-media print called Programmed features a Communist soldier with blossoming flowers covering each eye. The image is part of a series by Chinese-born artist Ying Huang, who describes her work as “Polipanda” – an amalgam of political pop propaganda art.

Another box lights up a digital collage by Wyatt Knowles in which a couple wears the same grey sweater – literally, their heads are popping out of the same neck hole – grinning in the cheesy fashion of a vintage magazine ad. The background is bright purple and the words “I feel lonesome not knowing god” are emblazoned across the image.

The works are on view 24 hours a day, seven days a week at RMIT and Melbourne Central’s Knox Lane. This is the first time that Lightscape boxes have been placed in Melbourne Central, where thousands of commuters and shoppers move to and from Swanston Street every day.

“I like that someone walking past my picture in Knox Lane can take it or leave it in the same context as they can take or leave the cinema advertising on the other side of the alleyway,” says Dominik Krupinski, whose quiet but powerful photograph of an isolated hut on Mt. Hotham is on show at Melbourne Central. “I like that there’s no (forced) sense of reverence about the work when it’s situated like this.”

Curator Tetzlaff says, “Some works are better when you can see them coming. Some have an instant read.” Either way, “you want to be surprised by them.”

“I believe strongly that art in public places is absolutely essential to improve the mood of commuters,” student Eva Collins says. “People are always pursuing their goals, are occupied with arrangements and errands and to pause – even fleetingly – to see some art … breaks the monotony of that pursuit.”