The Life Schematic With David Shrigley

We get to know David Shrigley, the cult English artist known for his crude, darkly humorous drawings, now showing at the NGV as part of a major exhibition. 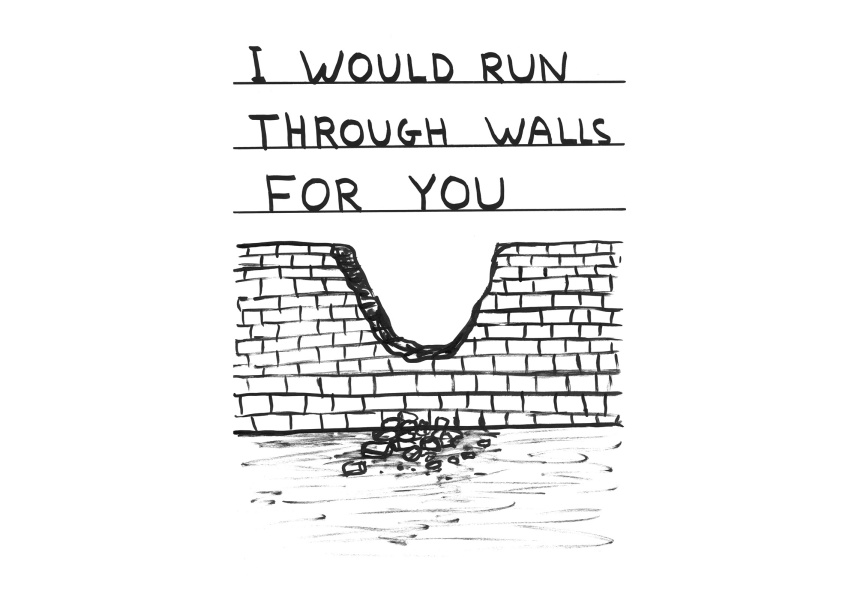 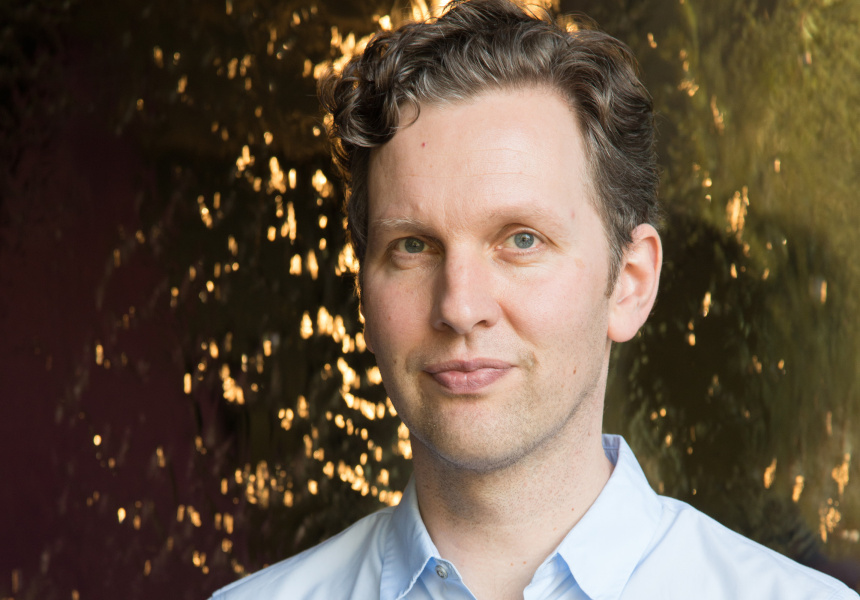 At the Serpentine Galleries in London a few years ago I picked up a book of postcards called Evil Thoughts. It had a fluoro-pink cover with a face scrawled in the middle that looked like a child had drawn it. I bought the pack, which was filled with crudely drawn characters and droll declarations. One of them read, in thick black letters: “CONGRATULATIONS ON YOUR FANTASTIC ACHIEVEMENT”. In the middle of the card was a misshapen circle with some lines through it, and at the bottom in smaller writing: “Me and your mother don’t understand what it is you’re supposed to have done or what’s good about it but you’re a nice lad so well done anyway.”

Over the years I’ve rifled through the collection when I’ve needed a birthday card in a hurry, but never used any. There wasn’t a single card I couldn’t be sure would not offend the recipient.

The man responsible for the postcards and thousands of drawings like them is David Shrigley, a Glasgow-based conceptual artist who arrived in Melbourne last month to launch his first major Australian survey. The NGV exhibition, called Life and Life Drawing, showcases sculpture, painting, animation, books and of course, Shrigley’s archetypal tragicomic drawings. Incisive and darkly humorous, his work has struck a chord with the pop-culture-loving masses as well the art-world elite.

Shrigley’s work is held in numerous public collections around the world, including London’s Tate and the Museum of Modern Art in New York. He’s been nominated for the prestigious Turner Prize, and in 2016 his 10-metre-high bronze sculpture of a dysmorphic thumbs up will take its place on the prized Fourth Plinth in Trafalgar Square.

Beyond traditional exhibition spaces, Shrigley’s work appears on tea towels, T -shirts and guitar picks. He’s designed numerous record covers and has made an animated film clip for the band Blur. Franz Ferdinand, David Byrne, Hot Chip and a bunch of others recorded an album of songs inspired by his writings. His cult following is such that fans get his drawings tattooed on their bodies, then send him photos, which he collects on his website. “I suppose it is flattering but my overriding feeling is that it’s just weird,” Shrigley says, of his inked-up devotees. “Personally, I don’t like tattoos and find it hard to understand why people want them. But then again, if they are going to have some idiot make an indelible scrawl on their bodies it might as well be me.”

The drawings for which Shrigley is most famous comprise hastily rendered black lines on white space, where rudimentary images or text (or both) comment on the absurdities of human existence. The NGV’s senior curator of contemporary art, Max Delany, says Shrigley’s work is, “Incredibly rigorous in its restraint, in the way that he’s able to explore large philosophical questions with such economy.”

They’re compositions deliberately stripped of graphic sophistication; with crossed-out words and malformed figures. They look like the handiwork of a child, albeit one with a serious case of existential angst, a wicked sense of humour and bordering on unhinged.

“He’s interested in the contest between free will and fate, the debate between good and evil,” Delany says. “His work is idealistic but doubtful, it’s humorous but despairing.” Shrigley often binds his creations into books with names such as Ants Have Sex in Your Beer, Kill Your Pets and Drawings Done on the Phone Whilst Talking to an Idiot.

“When people interview me in the flesh they tend to comment that I’m not really what they thought I would look like,” Shrigley says on the phone from Scotland. “‘Oh, you look really tall and healthy’. I think they’re looking for some kind of physical manifestation of the twisted nature of my work. They think I should be smaller and less healthy looking, and maybe disabled.”

He likes that his art’s broad appeal means it has the potential to, “exist in many different contexts, and mean different things at different times to different people.” He prefaces that by saying, “Just because an artwork is popular doesn’t mean it is a good artwork. So the seemingly ubiquitous nature of my work is not necessarily a good thing.”

“As to why it is popular and how that sits in the established art world, I don’t really know,” he adds. “I guess there is a lot of crap out there and maybe my work is less crap than the other stuff. Sometimes I get excited when curators from big museums get in touch to discuss ‘a project I might be interested in'. More often than not, rather than offering me an exhibition, they want me to design them a Christmas card.”

Shrigley was born in a town called Macclesfield in 1968, before his family moved in 1970 to Leicester, a small city in the English Midlands. He grew up there, always drawing – first dinosaurs, then pretend record covers for rock band Adam and the Ants. In 1988 he moved to Glasgow to go to art school and has lived there ever since. At school he sculpted, he took photos, he made public artworks. He continued to fill sketchbooks with the type of drawings for which he’s now best known, but kept them to himself.

“I wouldn’t have ever shown them to my teachers because it seemed like something childish. I wasn’t embarrassed, I just didn’t really think it had anything to do with art,” he says.

It wasn’t until after Shrigley graduated that these sketches became his main art practice. “I realised I could do whatever I liked anyway, nobody really cared,” he says. It also helped that these drawings required little resources and could be made anywhere. He ascribes the more comic turn his work took around this time to, “a rebellion against the seriousness of art.” His heroes include Marcel Duchamp and Andy Warhol.

When Shrigley is working on something – as he is at the time of our chat – he sets targets for output that have to be met by a certain time. When we spoke he’d set himself the mission of producing 15 acrylic paintings per day for an upcoming show. When he reached 100, he could stop. Sometimes he begins by writing a list of things to draw. He throws out most of them – about one in four survive. He’ll discard a drawing if, “it somehow looks like somebody with some talent made it.”

He finds sculpture, which is the centrepiece of his major installation at the NGV show, a more challenging exercise. The installation, Life Model, is a giant, badly proportioned naked man who blinks and intermittently pees in a bucket, while real people sit in front of him and draw him – a sardonic reimagining of the life-drawing classes Shrigley wasn’t so good at in art school. Like much of Shrigley’s work, the piece has a comic but disquieting appearance, underpinned by some remark on human fallibility. It’s a perspective he thinks Melburnians will get.

“I feel like we speak the same language,” he says. “Literally and metaphorically.”

David Shrigley: Life and Life Drawing shows at the NGV International until March 1, 2015. Entry is free.