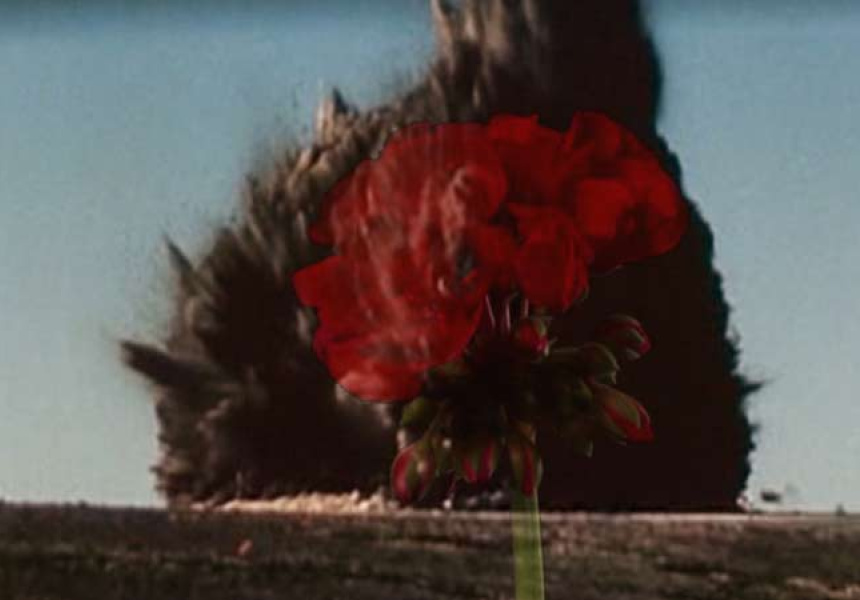 There is a rumbling beneath the desert silence. In a matter of moments, the barren Nevada plain splits, ruptures and bursts, tonnes of rock and earth and dust propelling skyward in a plume of thunderous tectonic violence. It is unnervingly orchestrated; controlled despite its inconceivable power.

One frame of the grainy celluloid footage reveals men watching in the foreground. Their collective body language seems to speak of pride and awe rather than horror. They watch, relaxed, as the desert dissolves into a cloud.

The film, part of an assortment of freely available footage of the American ‘Project Dugout’ explosive tests of 1960, is one of several such representations that make up Explosion, Kit Wise’s aptly titled new show at Sarah Scout. Drawing on footage from ‘Project Dugout’ and earlier atomic test ‘Operation Cue’ (1955), Explosion is an illustration of what the UK-raised, Melbourne-based artist frames as Western culture’s “sublime” rendering of disaster.

“Both of them are examples of man impacting, literally, on the landscape,” Wise, the Acting Head of Fine Arts at Monash University, says. “At the same time as being horrifying, the footage is also remarkably beautiful, or in a Burkian sense, sublime. I want the viewer to become more aware of the quality of their witnessing of disaster, particularly natural disaster, whether man-made or act of God.”

This quality, as Wise posits, is unnervingly aesthetic in its nature.

“There is an environmental agenda in the work, as well as a critique of our experience of disaster in the media,” he explains of the three videos, three prints and one light-box that form Explosion. “Disaster movies, as well as computer games and graphic novels, seem to increasingly draw on a latent unease about our relationship with nature,” he says.

“This parallels a greater emphasis on the effects of global warming in the media, which draws our attention to natural disasters and links them into an meta-narrative of environmental catastrophe. My concern is the point at which these reports are perceived as aesthetic by the audience.”