Ahead of his first-ever performances in Melbourne, Broadsheet sits down with the man often referred to as America’s greatest living composer. Despite his stature in the classical canon, Adams has an easy way about him, if intense. He emerges from rehearsal in sneakers and sweater and discusses his music without sans hyperbole.

Emerging from the minimalist tradition, pioneered by artists like John Cage and Philip Glass, Adams’ earlier works such as Short Ride in a Fast Machine (which opens his performances in Melbourne) employ repetition and beat to startling effect.

But the composer is better known for his 1988 opera Nixon in China. Taking inspiration from the historic meeting between President Nixon and Chairman Mao, the opera works found text into imagined dialogue.

Politics and history have continued to fascinate Adams, writing pieces on subjects as diverse as the terrorist kidnapping of a ship and the 9/11 attacks.

“In our our time, these kinds of images almost always come through the media. They come through the news,” he says. “To take them out of the ordinary, to take them off the television screen, and move them into the deepest parts of our psyche where we really experience them, that act is something that opera can do.”

Adams insists there’s no set formula to composing a work. Sometimes he starts writing with a performer in mind, while other times he’ll have a visual image he wants to express. “A lot of artists and composers brand themselves,” Adams says. “They have a hit, or they have something that works and they just keep pumping out different versions of the same thing. They can go a long way with that, but for me that would be so boring. I want each piece to be a different adventure and a different challenge.”

In a recent opera about the inventor of the atomic bomb, Doctor Atomic, Adams worked in news reports and direct quotations into the work. “I think that the Doctor Atomic libretto is a very unique thing, because a lot of what’s being sung is actually exactly what was said by these scientists,” he says. “It gives a real vivid reality to what I set to music.”

Adams admits that his concerns – and his music – are fundamentally American (and jokes that with his “American name”, they’d have to be), but he also believes that they should be able to communicate universally. He explains that music’s “ethnicity” is part of its appeal. “I like to think that as an opera composer, I’m touching on archetypal themes in our contemporary life, particularly for Americans, but not just Americans,” he says. “I think nuclear war ought to be a concern for everybody.”

While it’s a commonly accepted part of modern music, Adams was a pioneer in bringing electronic instruments into the symphony. Although people aren’t walking out of the concert hall these days, there was certainly resistance to the practice when he began. “People were educated that classical music was oboes and clarinets and cellos. Electronic instruments were for pop music,” he says. “It was the kind of frontier you had to go very carefully with. Most people are younger than me now, and they’ve grown up listening to this stuff and playing those instruments.”

Adams wagers that while electronic music is something Debussy, Bach or Wagner could never have imagined, he loves it. “I think they’re the sounds of our time,” says Adams. “There are certain things you can get with synthesisers and loudspeakers and reverberation chambers that create imaginary spaces that you just can’t get with a symphony orchestra.”

While Adams is comfortable with the idea of pushing genre divisions, he does believe composers need to appeal to their audience in one way or another. He says that there was a long period in the 20th century when serious composers thought that anything that involved communicating with the audience was suspect. “A problem with a lot of contemporary music is that composers didn’t give a damn for a long time. Somehow they felt that the audience had to come to them. Of course, they ended up with no audience,” he says. “You don’t want to write pretty stuff all the time. But you don’t want to write something that’s 100 per cent aggressive. It’s a matter of making something that’s an experience that is as varied, as rich and surprising as life is.”

Adams is touchy about the question of accessibility, however. Asked how we might better introduce people who’re unfamiliar with classical music, the composer is visibly annoyed with what’s obviously a question he has been asked too often: “They just have to listen. I don’t know what’s so difficult about that, but for some reason it’s a real problem,” he responds. “The problem in all of our cultures – not just in the United States but here and in Europe – is that kids don’t hear classical music because their parents listen to pop music. It therefore becomes this strange, alien sound that children associate with old people, or some unpleasant experience having to do with punishment of homework, and just don’t understand how wonderful it is.”

Whether they’re familiar with classical music or not, this week’s performances at Hamer Hall are sure to provide an engaging introduction to Adams’ work. Opening with the popular Short Ride in a Fast Machine, the show concludes with City Noir, a recent work that he describes as a an imaginary film score for noir movie. “I think it’s a very good program, because it has a high-energy, extraverted, short, opening piece, then the violin concerto is very expressively intense,” he enthuses. “City Noir, it’s a real virtuoso piece for everyone.” 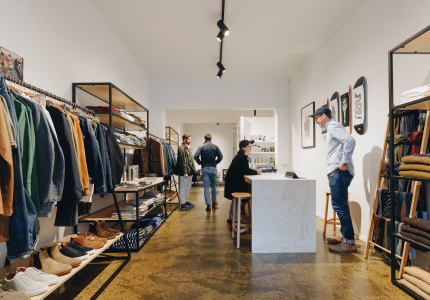