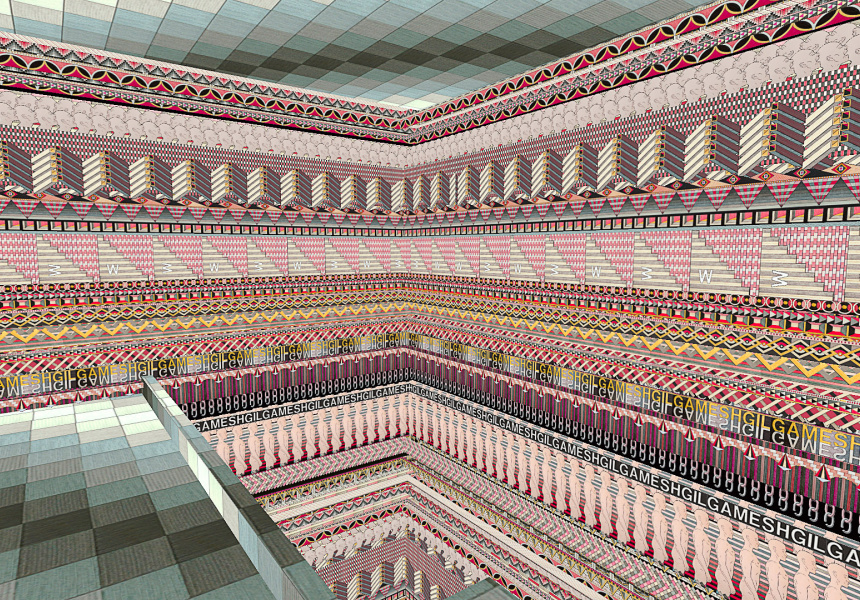 On the third floor of the NGV, in a narrow room right by the escalator, is the Ixian Gate: an enormous, palace-like structure inhabited by silent, crawling nudes and giant worms, where the laws of physics and biology don’t apply. To get there, you have to put on a headset.

Ixian Gate is the piece at the centre of illustrator Jess Johnson’s latest show, Wurm Haus. If you’ve seen Jess Johnson’s drawings, perhaps in 2013’s Melbourne Now, you won’t have forgotten them in a hurry. Johnson’s medium is texta and paper, and her work retains the innocence of something scrawled on a school notebook, with added depth and precision. There are hints of various ancient cultures on display – a bit of Egyptian god here, a bit of Moorish palace there – but the prevailing impression is that these are tapestries from another world.

Now, in collaboration with animator Simon Ward, Johnson’s drawings have been scanned, cut, and digitally rendered into a three-dimensional, immersive world accessible through an Oculus Rift virtual-reality headset. The technology may still be a prototype, but this is the sort of thing it’s made for: it transports you onto a ghost train through a Jess Johnson drawing, where you’re pursued by texta-drawn nudes and 50-foot demon heads.

Johnson’s world is drawn from science-fiction novels (there’s more than a bit of Frank Herbert’s Dune in here) and role-playing games, shot through with a healthy dose of paranoia and unease. Embedded in the images are neatly drawn slogans, from the raw emotion of “WE WANT TO LIVE” and “EVERYBODY PLEASE LEAVE EVERYBODY ELSE THE HELL ALONE” to the arcane “WURM WHORL NARTHEX” and “BLOOD VISIONS”.

“The language has always been important to it,” Johnson says. “It provides scaffolding to build a drawing on. Some of it is purely how the word actually looks in terms of shape, and how it will divide up the page.”

“The physical reaction people have is amazing,” says Simon Ward, Johnson’s animation collaborator. “There’s no other medium where you can affect people like this.”

"A lot of people start off just looking straight ahead, says Ward. “They’re stuck in that watching mode,” he says. “But after a while, they realise.”

After my turn at Ixian Gate, I see the next group of people disappear beneath the headsets. I watch them look up and over their shoulders as they see Johnson's nightmarish pastel world unfolding all around them."

Wurm Haus is at NGV International until January 31.