Radical American light artist James Turrell, one of the world’s most exciting living creatives, will go on show in Canberra. His major retrospective will be illuminating the capital, and expanding minds, from December. 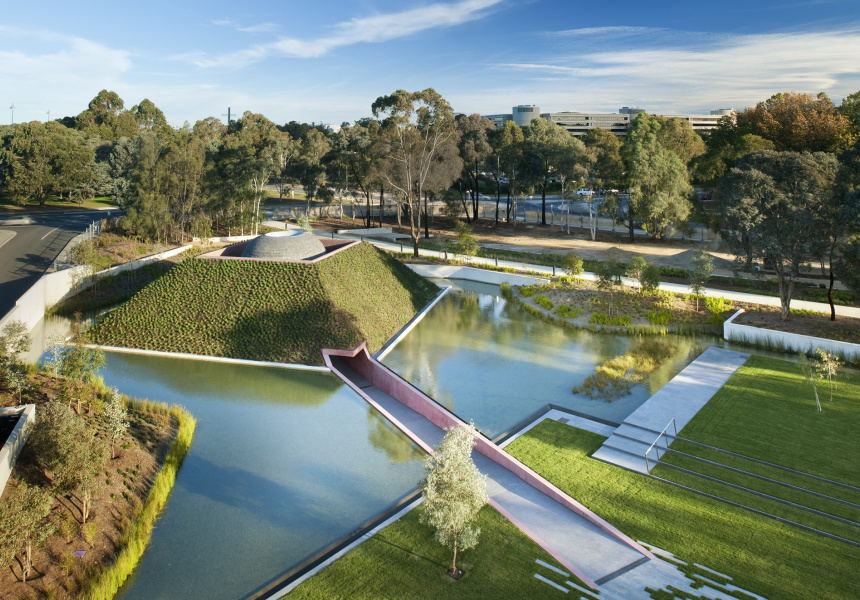 His work is soul shifting and game changing. It has a sense of wonder and tranquility, sometimes mixed with unease, even fear. Even if you’re not an art fan, it’s safe to say you’ll be blown away by James Turrell. The US artist, known for mesmerising manipulations of artificial and natural light, colour and space, takes art out of galleries and into the landscape, and takes viewers out of their comfort zones. “My art is about your seeing, like the wordless thought that comes from looking into fire,” he says.

Exclusive to Canberra’s National Gallery of Australia, James Turrell: A Retrospective opens on December 13, exploring almost 50 years of Turrell’s astonishing output. Expect to see projections, holograms, purpose-built installations, photographs and prints. His famous Skyspaces – viewing chambers that alter the way you see the sky – will be showcased as well as his ambitious life’s work, based around a volcano in Arizona. The exhibition follows hugely popular recent shows at Los Angeles County Museum of Art and the Guggenheim, New York. It’s also the first Turrell retrospective in Australia. We predict a blockbuster.

Sporting a bushy white beard, Turrell looks like nothing so much as a veteran hipster, and the 71-year-old has been known to don a black cowboy hat. So how did this dandily dressed art elder kick open the doors of perception? Having grown up seeing the work of great artists who painted the effects of light, Turrell wanted his work, “To be made of light itself,” he says. “For me, it’s using light as a material to influence or affect the medium of perception.”

Born in LA in 1943, Turrell studied perceptual psychology and his background as a Quaker and pilot also influenced his practice. His explorations into light art began in the ’60s, starting with fire sculptures and continuing with illusionary Projection Pieces – such as cross-corner projection Afrum (white) from 1966, which makes you think you’re looking at a floating cube. Many of these creations produced distorting effects, mysteriously blurring the boundaries between flat and 3D geometries.

Light, from natural to fluorescent, tungsten, fibre-optic and LED, became Turrell’s calling card. Darkness intrigued him, too, with works in the ‘80s and ‘90s that isolated individual visitors in blackness or enclosed environments, leading them to experience personal visions of faint colour in the inky surrounds. Just as disconcerting are Turrell's Wedgeworks, which use precise projected light to create a mirage of walls where none exist. An example is After green (1993), a portal-like field of green receding to red and blue, fostering the illusion of a barrier. More recently, Sight unseen (2013) draws on intense hues of LED light, coved corners and altered floor angles to create a “Ganzfeld effect”, totally disorientating viewer’s perception of depth by dissolving the space’s physical boundaries. It’s the artistic equivalent of a white-out in a blizzard. “I put you in a situation where you feel the physicality of light,” says Turrell. “I am interested in this new landscape without horizon.”

Sensuous Skyspaces are Turrell’s best-known works, enclosed spaces with an aperture in the roof. The National Gallery of Australia is home to Within without (2010), a beehive-shaped basalt stupa in the garden, surrounded by a moat of water and castle-like earthworks. Entering it, via a sloped tunnel, is like descending into an Egyptian tomb. Once inside, viewers sit in a circle within the intimate domed chamber, looking up. Most intense at dawn or dusk, the disc of sky above undergoes astonishing perceptual colour-field morphing, changing over time from pink to green and orange. You feel like an astronaut gazing out at rainbow planets.

Taking landscape art to new limits, Turrell is also transforming the Roden Crater – an extinct volcanic cone near the Painted Desert in Arizona – into a naked-eye observatory for celestial phenomena. He’s said before that he wants to channel the light we see in dreams, and the spaces that come from them. Long may the dreamtime continue.

Advance booking recommended, as timed-entry sessions will be in place, due to limited-capacity for some works. Immersive installation, Perceptual cell, can only accommodate one viewer at a time (aged 18 or over), so requires a special Premium Entry ticket.

Broadsheet is a proud media partner of the National Gallery of Australia.