She collaborates with Björk, works with architects and makes work that looks alive and futuristic. In partnership with Mercedes-Benz, the principal partner of the NGV Triennial, we highlight the innovative fashion of a modern Dutch master. In an exhibition teeming with frontier-pushing art, Dutch fashion designer Iris Van Herpen’s 2011 piece Dress is one of the NGV Triennial’s quieter masterpieces.

Introduced to public consciousness by Icelandic singer Björk during her 2012 Biophilia tour, Dress took the world of haute couture by storm. As a sculptural object it’s avant-garde and otherworldly, artificial-looking and yet somehow organic-feeling. Formed from circular semi-transparent acrylic sheets, it has been hand and laser cut and mounted to create a three-dimensional shell-like shape.

Björk isn't the only pop star to embrace Van Herpen's designs. Lady Gaga and Beyoncé are both fans, the latter donning a metallic Van Herpen creation for her 2013 video clip Mine. For forward thinking artists like these, the attraction is clear: Van Herpen’s innovative creations come from a wildly different place to that of usual haute couture designers.

The Dutch designer collaborates with architects, scientists and engineers during her design process, to construct work using a mix of 3D printing, laser cutting and labour-intensive handcrafting. Hundreds of hours of craft go into each garment.

“Her studio is very interesting,” says Ewan McEoin, NGV’s senior curator in contemporary design and architecture. "It’s small, but she works with a global network." McEoin is responsible for commissioning many of the works for the Triennial. The sprawling exhibition which runs until April 18, is a partnership with Mercedes-Benz, a sponsor of the NGV for more than 10 years and committed to exploring the intersection of artistic disciplines, design, innovation and technology.. Dress is one of the best examples of this intersection. "It’s very important to her that her work strikes a balance between high-technology and detailed craftsmanship," says McEoin.

Although Van Herpen’s process does rely on innovative technology, it isn’t led by it. “Her interest is really in the body,” says McEoin. “She continually shifts perception about how fashion relates to the body. [To do this] she works with people working at the frontier of material culture, and then co-opts them into garments. How she makes them extend the body is exciting.”

Van Herpen herself says the relationship her garments have with the body is a symbiotic one that reflects our push-pull relationship with classic forms and fresh ideas. “Often its the body telling the garment what to do,” Van Herpen told the NGV last year. “But sometimes I intentionally have the dress or garment control or influence the movement of the wearer.”

One piece like this on display is inspired by a visit to CERN’s Large Hadron Collider. The garment is constructed from laser-cut glass towers that look like water droplets impacting on a pool stitched together in a web-like, semi-transparent shell. The result is sculptural, intricate, beautiful and entirely unique.

“In fashion there’s so much going on, and a lot of it is very repetitive,” says McEoin. “[Her work] is experimental and innovative, telling the story of the current moment in time but one in which we don’t yet know the future. When she’s making it, Van Herpen and her team don’t know how it will work. They don’t know how long the materials will last. How will laser-cut plastic hold up? We’re not sure. She’s working in her own space.”

This article is produced by Broadsheet in partnership with Mercedes-Benz. A champion of fusing design principles with technology to create a 'modern luxury', Mercedes-Benz is a principal partner of the NGV Triennial. 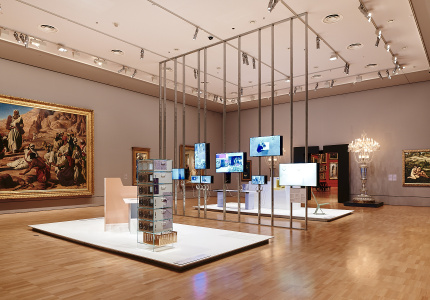