A groundbreaking new design school at Melbourne University exudes both jaw-dropping drama and quiet ingenuity, but did you know it existed? 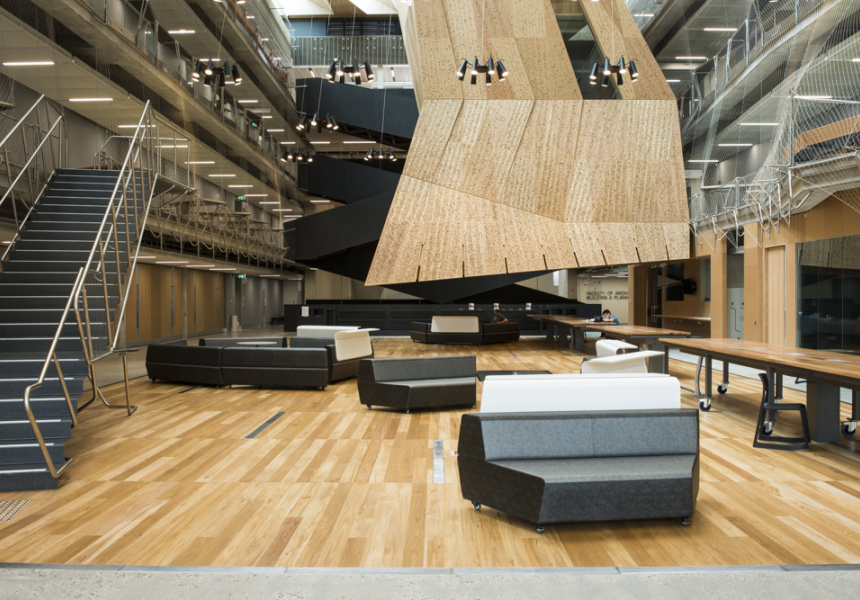 One of the city’s newest pieces of architecture opened in December last year. But if you’re not a student or member of the staff at the University of Melbourne, you may have missed it.

The Melbourne School of Design – a multi-textured colossus of glass, concrete, zinc, brick and steel – is the new state-of-the-art home for students of architecture, planning and building at the University of Melbourne. The design hub occupies a site formerly inhabited by the university’s old commerce and architecture buildings, the latter of which was an outdated, poky property built in the 1960s, then renovated in the 1980s.

In 2009, when it was clear the buildings were reaching the end of their serviceable life, the University of Melbourne held a competition to determine who would conceive its new design hub. A team including Melbourne-based John Wardle Architects and Boston-based design firm NADAAA won the contest, beating 132 other competitors.

Wardle and NADAAA, under the instruction of principal Nader Tehrani, were instructed to build a world-class institution – one that would not only be a living, breathing teaching tool, but something that would be as inspiring and exciting to a random passerby as to an engineering student.

“Being situated in the core of the campus … the building has to enhance the daily experience of everyone who encounters it, regardless of whether they have expertise in design and construction or not,” says Professor Tom Kvan, dean of the faculty of architecture, building and planning at the university. The new school must, “invite, engage and reward inspection by everyone.”

Wardle and NADAAA resolved early on to retain a historic 1856 façade that had been part of the old commerce building. The mid-19th-century stone edifice, designed by one of Australia’s most important Victorian-era architects, Joseph Reed, was originally part of the Bank of NSW on Collins Street before it was moved to the university campus in the 1930s.

Today the columned, renaissance-revival frontage is flanked on each side by metal screens, glass and prefabricated concrete, making for a dramatic western façade that blends industrial high-tech with heritage classicism.

Only a few other elements of the old building remain, such as the Japanese Room, one of many themed rooms commissioned for the former building in the 1960s by then dean of the faculty, Brian Lewis.

In its very fabrication and aesthetic, the new MSD had to provide, “A vast range of modes of learning,” says architect John Wardle. Raw steel beams and refined perforated timber show rather than tell students about construction methods and techniques; a window into a plant room in the basement reveals the usually hidden vital organs of a modern institutional facility. The school is one giant, humming, state-of-the-art classroom, and every architectural detail is a lesson for its students.

The dramatic main stairwell – a so-called Y-stair that heads off in two different directions – is made of highly refined veneer, stonework and stainless steel. The underside, however, is raw, criss-crossed metal. The original intention for the stairwell was to be clad in its entirety by acoustic panelling. But when the first set of stairs was craned into position, and the architects saw the exposed steelwork beneath, they immediately realised that for educational and aesthetic reasons, the surface should remain uncovered. The steel beams retain graffiti-like markings made by the manufacturer.

“It is a massive building that we hope will be appreciated for its small and variant spaces as much as for its large strategies and more profound settings,” says Wardle.

The four-storey Brian Lewis Atrium is one of these “more profound” spaces – it’s without a doubt the building’s jaw-dropping moment, for its scale, its loftiness and a massive, timber-encased, three-floor suspended studio, which hangs from large timber beams at the western end of the hall. The ceiling is a coffered installation of glass and wood, with oblique, box-like beams that support an enormous skylight.

So, next time you’re north of the CBD – check out the MSD. And keep in mind some of the following details on your self-guided tour: John Wardle is delivering a talk and tour at the building tonight, 6:00pm, Wednesday March 25. Details can be found here.