Concept art and lofty goals have their place, but real climate change starts with immediate action. And we’re already running behind. In partnership with Melbourne Design Week, an expert explains how some of the country’s top architects and designers might lead the way. 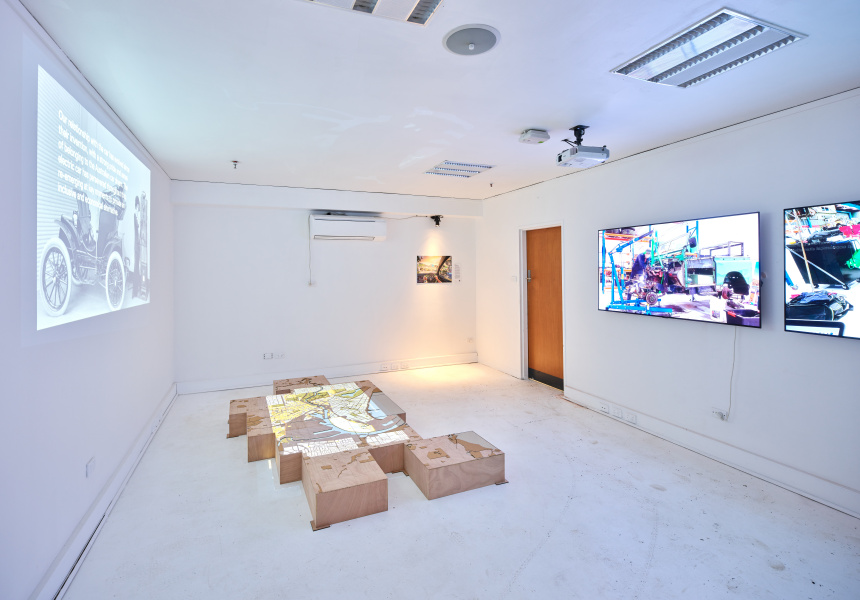 Ross Harding is the principal of Finding Infinity, a Melbourne organisation that provides advice to developers and architects to help their projects become environmentally sustainable. This means he’s on the frontline of understanding the city’s need to become self-sufficient in response to climate change – whether that’s 100 per cent renewable, zero-waste or water neutral. So he’s doing something about it

“We’ve identified a $100 billion opportunity to transform the entire city,” says Harding, “We’ve translated that into 15 projects. And [now] we’re seeking funds to deliver them.”

Those 15 projects are presented in A New Normal, an ambitious exhibition curated by Finding Infinity on show at Melbourne Design Week. Ranging from sustainable energy production to far-reaching waste management, the exhibition challenges Melbourne to become entirely self-sufficient by 2030. Held on the rooftop at 130 Little Collins Street, visitors can see a cross-section of prototypes devised by some of the country’s top architects and designers that attempt to address the issue.

“We’re not saying we have all the answers,” says Harding. “[But] we have a pretty good idea of what’s going on and we’re having a crack. Let’s make Melbourne a world leader on the topic and export the knowledge.”

It doesn’t mean starting from scratch. Harding says each project on display is designed to integrate the city’s existing physical infrastructure with a “cultural infrastructure” that speaks to community and the human experience.

“It’s the sum of things that are quite tried and tested,” says Harding, “but applied in an ambitious way to say, ‘Let’s stop fluffing around about it’. That’s where the name came from: we need to reposition this as the baseline. We’ve got all the technology and it’s profitable – what’s not normal is how we’re currently doing things.”

The ideas are impressive – A New Normal has already won the Design Week Award for Melbourne Design Week presented by Mercedes-Benz. We asked Harding to take us through five of the projects and explain.

Grimshaw x Greenshoot x Greenaway Architects: Electric Car Conversions
Instead of waiting for new electric cars to catch on, architecture firms Grimshaw and Greenaway have teamed with consulting firm Greenshoot to put in motion a plan to electrify 1.3 million cars in Melbourne by 2030. That’s right: making existing cars electric (a process already being done in Land Rovers by a Williamstown business called Jaunt , for example). The project includes recycling or reusing parts left over from the conversion process, and making the whole process public and transparent.

Hassell: Multi-level Car Park Battery Bank
Connecting to the goal for electric cars, global design firm Hassel is demonstrating how an existing multilevel car park can be transformed into a battery bank of electric cars and make use of that collective energy for the city itself. “Add them all up and their battery capacity is 300 times the largest battery in the world,” says Harding. The project also involves making car parks a casual space to engage with the performing arts via programmed light and sound installations.

Ha: Welcome to the Valley of the Sun
Right now about 80 per cent of Melbourne’s electricity comes from brown coal, putting it in the top one per cent of the world’s polluters per capita. “We’ve got to get off that stuff,” Harding says, emphasising “large-scale solar projects that combine with agriculture as an alternative to brown coal.” Ha, a Melbourne architecture practice based in Collingwood, offer one solution (as part of a wider initiative) centred on the sun-soaked Latrobe Valley. In this case, a solar agriculture base that could provide half of the total power for greater Melbourne, including a rooftop greenhouse that doubles as a source of fresh food and energy generation.

Openwork: MCG
A nightclub that’s also a water treatment plant? That’s the attention-grabbing concept behind Openwork’s project, which cheekily positions treated wastewater as the drink of choice in an urban social setting. “You can treat it to a standard that’s even better than water on the grid,” Harding says. “All water is recycled and has been for millions of years. We’re just a little scared of it.” He says 86 per cent of Melbourne’s wastewater is currently cast off to the ocean, meaning only 14 per cent is reused. Many other cities, from London to Amsterdam to Perth, already reuse their wastewater – whereas the alternative of eventually desalinating seawater is both “expensive and illogical”.

NMBW: Middle Ring
Then there’s the water that falls from the sky, which could be captured in new ways. Nigel Bertram’s architecture studio NMBW is exploring how closing off a suburban cul-de-sac to everyday car traffic could free up the street for use as a mini-park or garden to soak up all that precious rainwater. All the residents need to share is a carport at the street’s entrance. “So much of our city is suburbs, streets and cars,” says Harding. “[Bertram] is basically taking a small cul-de-sac of 20 homes, removing the cars and putting them at the end of the road in car-share spaces.”

A New Normal is on show at the 130 Little Collins Street rooftop until April 5.